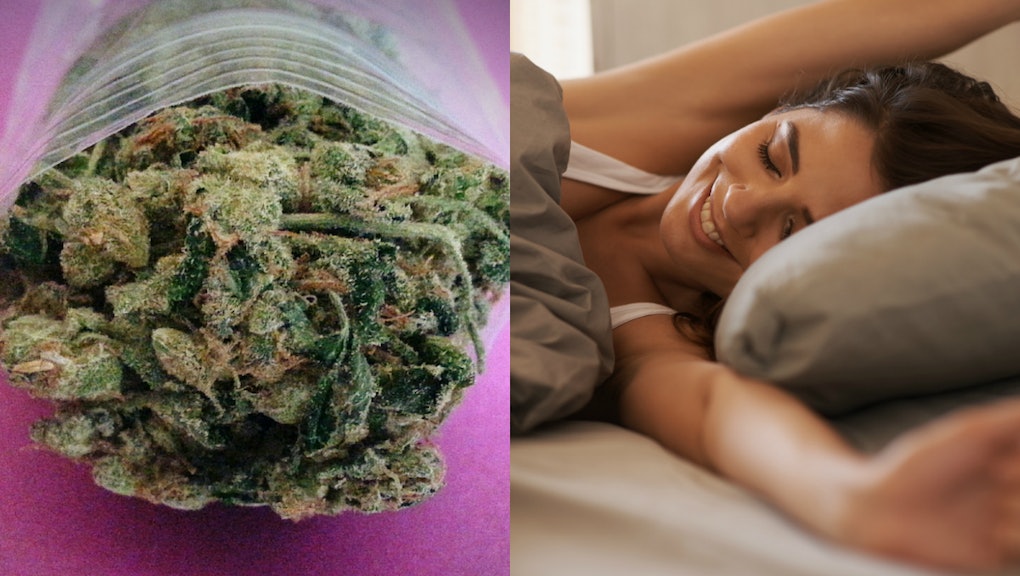 Here's How Smoking Weed Will Affect Your Sleep

Some project has been stressing you out at work. You're on hour three of unsuccessfully trying to fall asleep. Another episode of Breaking Bad just gets you even more wired, so you pull out a bong that looks like a dragon and get a little stoned. Boom. You pass out.

But when you wake up, how do you feel? Groggy? Refreshed? Was your weed-induced sleep better or worse than it would have been if you'd just fallen asleep naturally, using this breathing trick, for example?

Mic spoke with a number of medical marijuana advocates and addiction experts about the benefits and drawbacks of getting high before bed, and the conclusion is... there isn't one. Researchers say it all depends on what you want out of sleep.

Experts agreed on a few things: Marijuana probably helps you fall asleep, as long as it's a type of marijuana plant categorized as indica, rather than sativa. Indica is known the relaxing type of marijuana; sativa is thought to be energizing.

Cannabinoid receptors, which are mechanisms you already have in your brain that receive cannabis, play an important role in regulating your anxiety and keeping those lizard-brain "fight-or-flight" responses to a minimum. That's why weed makes you calm down enough to fall asleep.

But after that, its impact on your sleep is uncertain. The most important question here: which stage of sleep is more important, stage 3 or stage 4?

Stage 4, or REM sleep, is what refreshes your brain. Weed makes that brain-refreshment stage less effective.

Dr. Perry Solomon, chief medical officer at HelloMD, a digital health care platform for medical marijuana, says it's the third stage of sleep — deep sleep or slow-wave sleep — that seems to let your body "renew and repair itself," as an adaptation of a health report from Harvard Medical School stated. Stage 3 is "the most sensitive to cannabis," Solomon told Mic. "Marijuana seems to make that stage longer, and people get a more restful sleep when [slow-wave sleep] is longer."

While Solomon (and the adaptation of the health report) says that stage 3 sleep is probably what repairs your body the best, Hill says stage 4, or REM sleep, is what refreshes your brain. Weed makes that brain-refreshment stage less effective.

"You need it all," Hill told Mic. "But if you're using cannabis to help you sleep, your sleep architecture is not optimal. You might optimize stages prior to REM, but if you cut into REM, you're hampering your efforts."

The possible risks: Dr. Harold Urschel, chief medical strategist at Enterhealth, a drug and alcohol addiction rehab center in Texas, thinks using cannabis to get to sleep is more of a slippery slope than you might expect.

For one, he says, if marijuana has been cutting into your REM sleep and reducing dreams, cutting it out of your night routine could mean those dreams could return in unsettling ways. If you've been using cannabis to fall asleep every night for weeks, trying to phase it out can result in withdrawal that often includes insomnia.

There's a problem with this whole story: The science is inconclusive because marijuana research is barely crawling. As much as anecdotal evidence stands to at least pave the way, our physiological understanding of the substance as a whole is barely more than personal experience.

That's because, according to the Drug Enforcement Administration, weed is a Schedule 1 drug, the same category as heroin, peyote and Ecstasy. Schedule 1 means the drug has no medicinal value — and running trials is the only way to prove it can have value. So in order to better understand the effects of marijuana on a physiological level, the DEA needs to reschedule marijuana to reflect its potential for medical use.

That is, if we're ever going to fully understand the pros and cons of weed once and for all.

"I wish we could have a less theoretical conversation about this," Hill said. "If you're treating people with cannabis and say it works for certain things, it would be great to have scientific evidence to back it up. Rescheduling marijuana would definitely help that."

The bottom line: From what experts deduce, you have to choose what kind of sleep is important to you. If you smoke weed, you'll probably be more physically restored. But you could become mentally foggy and dream less, if you dream at all.

This article was originally published on March 11, 2016