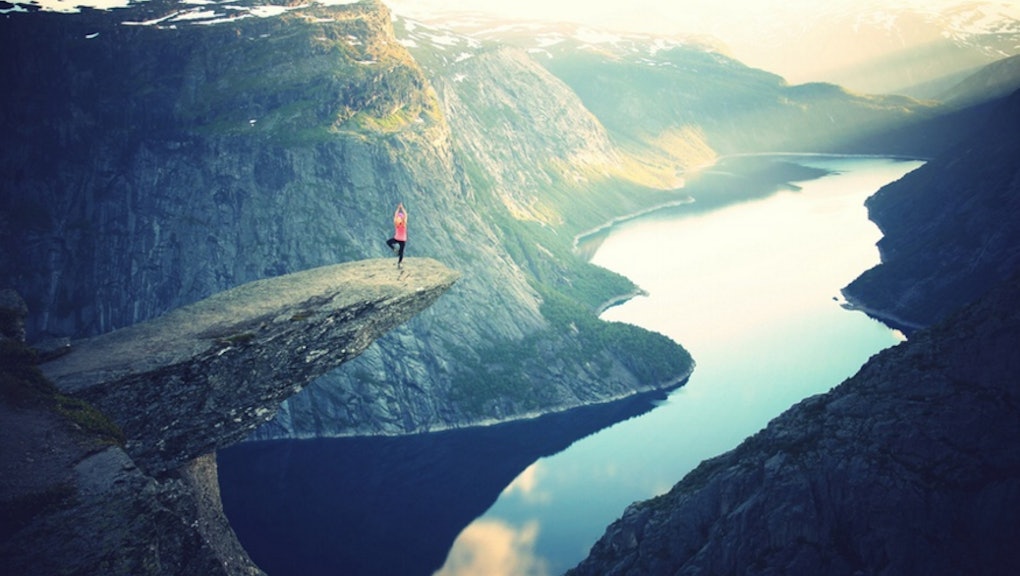 5 Reasons the Healthiest People You Know Swear By Yoga

Yoga is a holistic exercise that some participants embrace both for its mental and physical benefits. Those hooked to the ancient practice of yoga enjoy a number of positive health effects, and, for some, those benefits lend to a healthier state of mind, too. B.K.S. Iyengar, the pioneer of what's now known as the Iyengar style of yoga, once said, "Healthy plants and trees yield abundant flowers and fruits. Similarly, from a healthy person, smiles and happiness shine forth like the rays of the sun."

Studies have shown that practicing yoga can promote good health in a number of ways. According to the National Center for Complementary and Integrative Health, yoga can help ease chronic lower back pain and improve range of motion in that area. What's more, practicing yoga may help reduce blood pressure and lower heart rates, which can help with anxiety and depression.

"Other studies also suggest that practicing yoga (as well as other forms of regular exercise) might improve quality of life ... and improve overall physical fitness, strength and flexibility," the NCCIH reported. "But some research suggests yoga may not improve asthma, and studies looking at yoga and arthritis have had mixed results."

And according to the American Osteopathic Association, there are more than 100 different schools of yoga to choose from, depending on if the end goal is a physical one or something more meditative.

1. Increased flexibility: Good flexibility is important in that it's thought to increase physical performance and decrease the risk of exercise-related injuries, according to Mayo Clinic. Yoga Journal has you covered with a list of poses that can help increase flexibility.

2. Weight loss: Pointing to one study conducted at the Fred Hutchinson Cancer Research Center in Seattle, WebMD reported that yoga can help with weight loss — or at least help those who practice yoga not gain pounds — though it can take time for results to show.

According to the survey, which defined normal yoga practice as 30 minutes once a week for four plus years, weight loss over time is a real benefit for yogis. "Those practicing yoga who were overweight to start with lost about 5 pounds during the same time period those not practicing yoga gained 14 pounds," Alan Kristal, a medical researcher who worked on the study, told WebMD.

3. Improved circulation: Certain yoga poses, particularly inversions or modified inversions — like legs up the wall pose — can help increase circulation in the body, which helps bring oxygen to vital organs throughout the body. Modified inversions are, like the name implies, simpler modified versions of more difficult inversion poses that budding yogis should tackle first.

4. Stress reduction: According to Yoga Journal, there's some serious biological processes at play to explain why practicing yoga can leave us feeling zen. The publication reports that yoga can help increase the activation of a body's parasympathetic nervous system, which is the part of the autonomic nervous system that's in charge of slowing a person's heart rate and lowering blood pressure.

"Many yoga practices, including quiet asana, slow breathing, meditation and guided imagery, increase activation of the PNS and lead to mental relaxation," Yoga Journal reported. "One of yoga's secrets, documented in research from the Swami Vivekananda Yoga Research Foundation near Bangalore, is that more active practices followed by relaxing ones lead to deeper relaxation than relaxing practices alone."

5. Muscle definition: Think of yoga as one long lifting session, if you were to replace the weights with the weight of your own body. Poses like plank position and chaturanga help to strengthen muscles in the arms and back, while chair pose helps tone leg muscles. Other poses, like triangle pose or tree pose, help build muscle by challenging the body's balance.

"While this may seem like significantly less effort than hitting the gym and lifting barbells," Livestrong stated, "a 2005 study by the American Council on Exercise found that participants could do significantly more pushups and situps — a sign of increased muscle mass — after eight weeks of Hatha yoga than those who did no exercise. This muscle strength translates visually over time into firm, sculpted bodies."