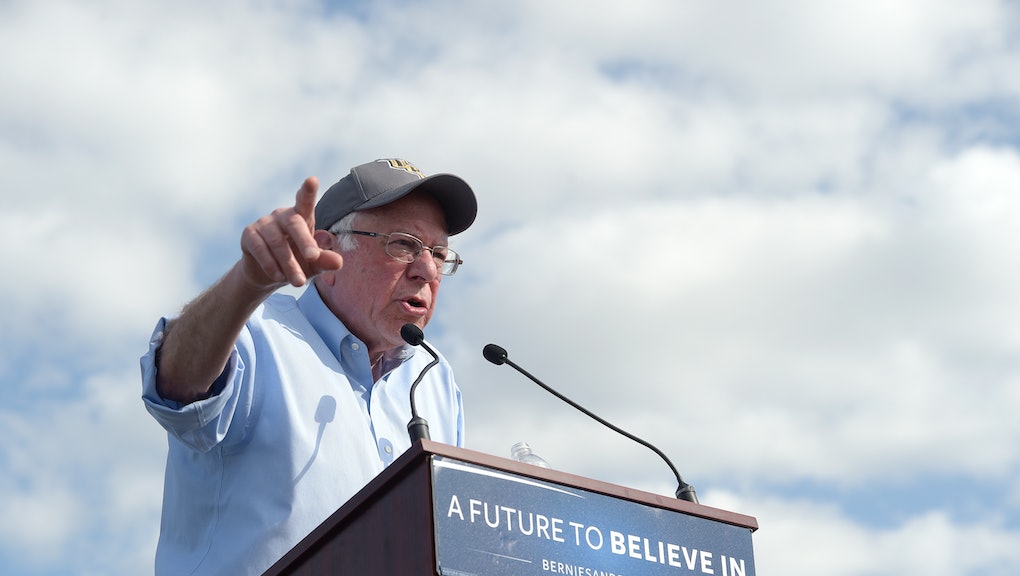 Not everyone's a fan of Bernie Sanders' campaign slogan "Feel the Bern." And even fewer are keen on a catchphrase that newly surfaced on Friday: Bern the Witch.

The tagline appeared on the Democratic candidate's official campaign website advertising a debate viewing party in October. Though the page is no longer live, a Reddit user resurrected the event invite from the site's cache.

Anyone can register a campaign event on Sanders' website and that's exactly what 39-year-old Joe Smith said he did a few months ago when he wanted to show his support for Sanders. Smith, the owner of Piezano's Pizza Kitchen in Elizabeth, New Jersey, as the event description reads, told Mic around 30 people showed up to the viewing party, which he held in the restaurant's dining room.

Smith said he named the event "Bern the Witch" because it was timely: The first Democratic debate aired on Oct. 13, just a couple weeks before Halloween. "I'm referring to the fact that [Hillary Clinton] is a candidate we have to defeat," Smith said. "In the spirit of the Halloween season and 'Feel the Bern' being the mantra of the candidate's campaign they kind of connected."

People on the web who saw the slogan are interpreting it a bit differently.

And a website called Thrill Society has been capitalizing on the slogan with "Bern the Witch" T-shirts and buttons, which Smith said he wasn't associated with. Nonetheless, Smith told Mic he didn't see what the fuss was about with the phrase. When asked if he believed "Bern the Witch" was sexist, he said, "No, not at all."

In fact, Smith said he believes Clinton has supported some anti-women policies and initiatives herself. "She was against gay marriage so women couldn't marry other women — that policy is sexist," he said. "Right now in Honduras they're killing women leaders for a coup she supported when she was secretary of state. Her policies are a problem."

Smith said he's been involved with political campaigns since the '90s, and worked in Ohio and Florida during the George W. Bush and Al Gore election. Now that he's a small-business owner, Smith said he will continue to fight for Sanders by making personal donations to the campaign and using his pizzeria as the venue for election events, including one Sunday hosted by New Jersey congressional candidate Eloy J. Delgado.

But it seems if his message to "Bern the Witch" keeps spreading, Smith may have ended up hurting Sanders instead of helping him.

Facebook user Eileen Davis wrote, "I respect both Candidates [sic], but the Bernie leadership needs to shut the misogynist sh*t down and stick to the issues."

Mic reached out to the Sanders campaign for comment and will update this story if we hear back.