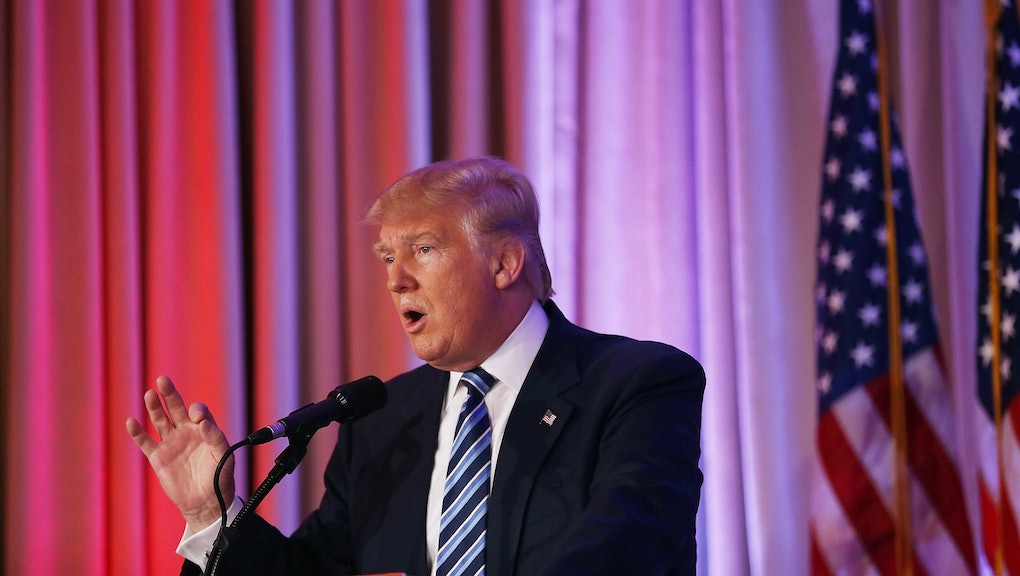 Donald Trump on Black Protesters: "These Are Not the People That Made Our Country Great"

As of 2:30 p.m. Eastern on Friday, no fewer than three separate protests had interrupted Donald Trump's rally inside the Peabody Opera House in St. Louis.

One group of demonstrators held up signs that read "Not Your Lazy Black" and "AmeriKKKa" before they were removed by security, all while the crowd cheered and shouted, "USA! USA! USA!"

Shortly before they were escorted out, Trump pointed at the protesters — all of whom were black — and said, "These are not the people that made our country great."

"Go home and get a job," he added. Near the beginning of the rally, another protester had been removed after letting out a dramatically overwrought fake laugh at one of Trump's jokes:

Aside from the irony of telling people whose enslaved ancestors largely built the U.S. that they are "not the people" who made this country great, the St. Louis rally was marked by the same kind of violence that's come to be expected wherever Trump's followers gather.

Meanwhile, St. Louis has been in the public spotlight over the past two years as a site of racial tension. The shooting of black teenager Michael Brown in the nearby suburb of Ferguson, Missouri, in August 2014 sparked days of protests, which were swiftly met by Ferguson police with armored cars, riot gear and tear gas.

Protesters are regularly and often violently removed from Trump's rallies. At a gathering Wednesday in Fayetteville, North Carolina, one black man was already being escorted out by security when he got sucker-punched in the head by a white Trump supporter.

Yet Trump's often hateful and racist rhetoric continues to draw throngs of supporters:

Trump has also received endorsements from prominent white supremacists. David Duke, a one-term Republican Louisiana state representative and former Grand Wizard of the Ku Klux Klan, said on his radio show in February that "voting against Donald Trump at this point, is really treason to your heritage," according to BuzzFeed.

Trump is currently the frontrunner for the Republican presidential nomination.