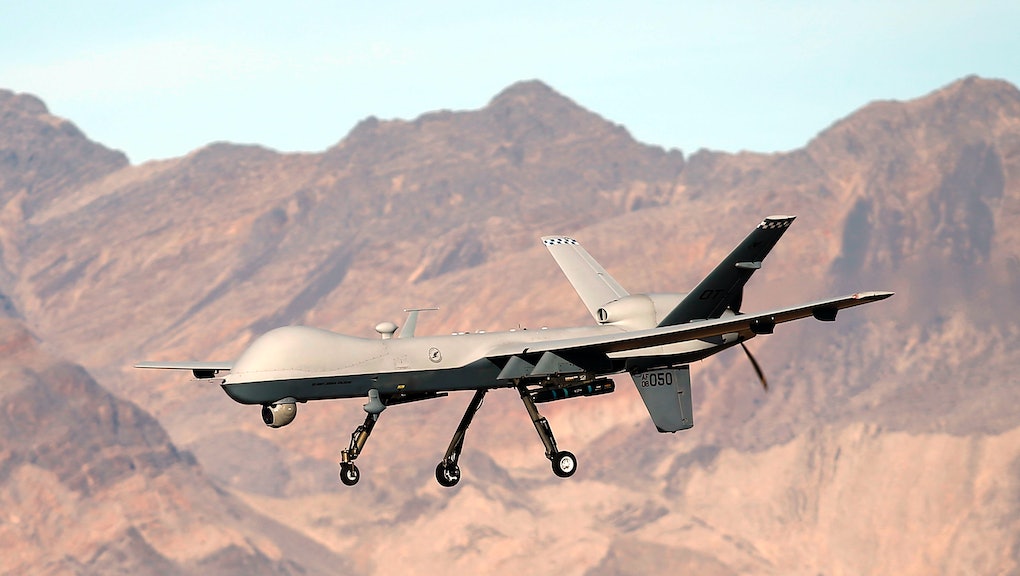 As the Department of Defense explores plans for fully autonomous weapons, people will have to ask themselves about the ethics and effectiveness of robots that kill.

In his latest film, Eye in the Sky, starring Helen Mirren, Aaron Paul and Alan Rickman, the director digs into the larger questions surrounding drone warfare and the eventuality of weapons that can strike without human operators.

The movie follows a military colonel in her quest to knock out a top al-Shabaab agent, an American drone pilot and his struggle with pulling the trigger and the political difficulty of having a drone strike approved.

Hood heavily features drones of all types in the film — both surveillance and missile-enabled. Though the movie's drones are created by computer graphics, Hood did extensive research to make sure that the technology in the film was as close to reality as possible. Throughout the production of Eye in the Sky, Hood consulted with drone pilots, government contractors and military officials.

Mic sat down with Hood to talk about drone warfare, where it's headed and what it means for citizens internationally.

Mic: There's a lot of drone technology in your film, both big weaponized drones and small surveillance drones. What was your objective in portraying this kind of technology?

Gavin Hood: The short answer is: 'Cause that's the way it's going.

Right now, we have Reaper drones that are armed with GBU-12s and Hellfire missiles, and we have the Black Hornet — which is a teeny-tiny helicopter that is deployed with British forces. We had one the other night at a screening and a guy was demonstrating flying it around the room, and it is only a surveillance tool. But there is absolutely no reason why that surveillance tool can't be weaponized with a small explosive and fly close to the target and blow up next to your temple.

So we wanted to hint at the way technology is being used without pushing it to a point where it seemed too sci-fi. I was worried that it seemed sci-fi anyways, bearing in mind that we did this two years ago when we filmed it, three years ago when we wrote it.

Why did you want to draw attention to drone warfare in particular?

GH: Well I think more than drone warfare, the future of warfare is more and more autonomous weapons. ... The Reaper drone is in use now; what you see is accurate with the Hellfire missiles. The little Hummingbird was developed about five years ago; you can find it on YouTube. Nobody is quite saying whether it is deployed at this point or not, but it's certain that's the plan. It's being developed under a DARPA contract and so are the teeny, tiny, little drones.

The little drones are also being developed to be weaponized. You would just simply fly the drone down and detonate it next to the head of the man in the room — creepy, strange stuff. Or you would just give him a little squirt of anthrax in the nose.

On TED talks, they throw small drones up in the air. The [drones] all know where each other are in relation to each other; they no longer need GPS to fly because they look with stereoscopic vision.

If you look at our drone, he has two little eyes on either side of his camera. Those are stereoscopic cameras where you come into the room, you map the room and the drone itself builds up a view. It knows where everything is in this room, and the pilot doesn't have to land it mechanically on the beam; he points to the beam and the drone lands itself.

The film itself seems to strike the middle ground about both sides. Why did you choose not to take a stance on the issue?

GH: I want both sides to talk about it. It was a decision that Guy [Hibbert] and I made early on, and we know that the risk is you may say, "Well this film doesn't pick a side." The danger of picking a side is that the other side doesn't come to watch your film. So you preach to the choir, you change nothing and you're simply part of one side's propaganda machine.

I think this is a very complicated situation in which both sides need to talk to each other in order to come to some sort of policy that achieves the super-objective, which is reducing extremism.

It's not about whacking one mole and saying we got one bad guy. Even if we did get the bad guy, we have to ask the bigger question: Did getting that bad guy achieve, advance our overall objective of reducing international extremism or did it not? And that's an ancient question.

I love the example Grégoire Chamayou uses in Drone Theory, which is: You want a weapon that has no collateral damage and is very effective? It's called the guillotine.