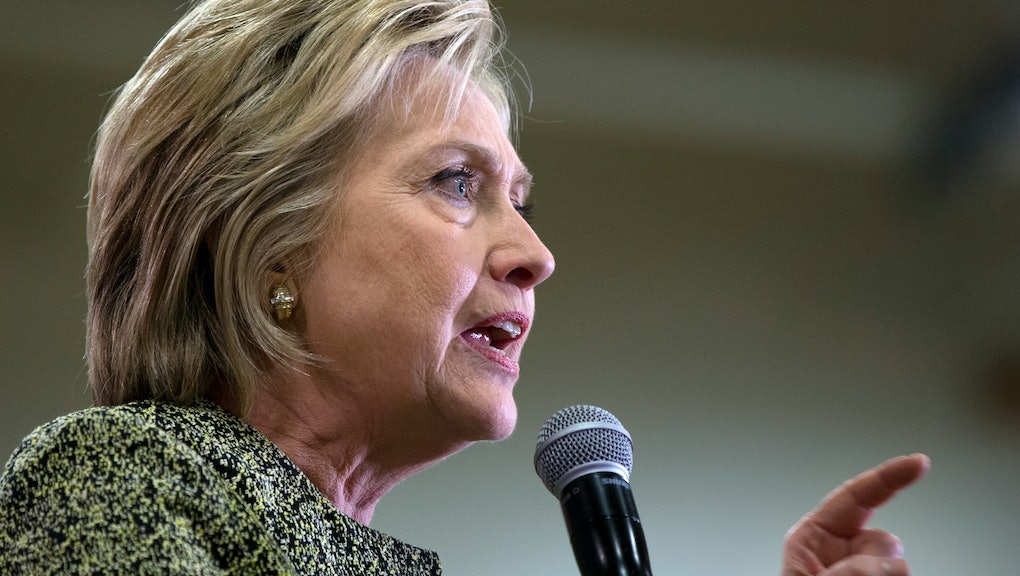 On Friday, Republican presidential front-runner Donald Trump postponed a planned rally at the University of Illinois at Chicago after fights broke out between attendees and protesters. Soon after, Democratic candidate and former Secretary of State Hillary Clinton weighed in to urge both sides to calm down.

Clinton's statement argued against "divisive rhetoric," saying, "All of us, no matter what party we belong to or what views we hold, should not only say loudly and clearly that violence has no place in our politics, we should use our words and deeds to bring Americans together."

She cited the response of victims' families following the June 2015 massacre at Emanuel African Methodist Episcopal Church in Charleston, South Carolina as "the model we strive for to overcome painful divisions in our country."

The context is key — Trump's appearances have regularly been riddled with acts of violence from his supporters, and he has both singled out black protesters for crowds to turn upon and more or less openly endorsed violence against them.

As such, Clinton's statement went over poorly with many commentators, who variously described it as drawing a false equivalency between Trump's supporters and protesters, as conceding too much to the Trump camp or as empty rhetoric.

It's not the first time in the past week Clinton has weighed in on something and faced a backlash from critics on the left. She issued an apology on Friday for calling former First Lady Nancy Reagan, who was complicit in her husband Ronald Reagan's silence on the HIV/AIDS epidemic of the 1980s, a "low-key" advocate for people who contracted the disease.

However, Clinton has not been silent about the numerous accounts of violence encountered by protesters at Trump rallies either. In a Thursday interview with MSNBC's Rachel Maddow, Clinton said Trump "should not be urging people on. This is deeply distressing, and I think as the campaign goes further, more and more Americans are going to be, you know, really disturbed by the kind of campaign he's running."