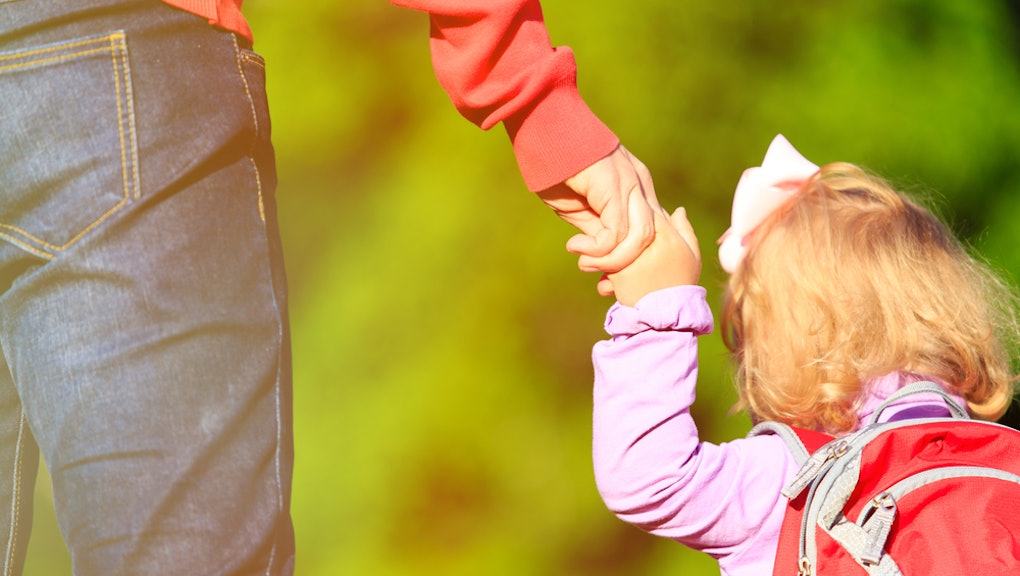 More and more millennials are choosing to be childfree. And as anyone rapidly approaching 30 can tell you, with that choice can come some uncomfortable conversations. Even though it's becoming increasingly acceptable for many young women to opt out of motherhood entirely, there's one group that's still invested in the decision whether or not to have kids: your parents.

Telling your parents they won't be grandparents has become a whole new step in the coming-of-age process. The coming-out conversation can be anxious and fraught, or positive and validating. But it's hard to guess which one it will be when you're going in.

Mic spoke with millennials who are childfree-by-choice to find out how these conversations really go down. Here's what we learned.

It might take more than one conversation to get the point across.

Constanza*, a 22-year-old living in Los Angeles, told Mic that she first realized she didn't want kids when she was in elementary school.

"At that point in my life, my mom was pregnant with my youngest brother, and I decided that I never wanted my body to go through the toll of pregnancy," Constanza said. "My brother was born the summer after third grade, and my parents wanted me to be very involved in helping take care of him. I love my brother, but at that moment I knew I could not and would not have the temperament necessary to raise a child."

Constanza didn't voice her emotions yet, but the next year she had a teacher who was open about her choice not to have children. "I was initially shocked because up to that point I hadn't met any adults that willingly talked about not wanting kids. I remember asking her ... 'Does your life feel empty in any way?' ... She said that she had the freedom to do whatever she wanted."

When Constanza first brought up how she felt in fifth grade, her parents were understandably skeptical. But in the years to come, she and her mom sat down for many of what she coined "I-don't-want-children talks."

"For years, my mom always ended these conversations with, 'I was exactly like you at your age, but then I got older and really wanted to have a baby,'" Constanza said. Her mom was confident Constanza's biological clock would kick in once she got older. Instead, Constanza says, "My reasons for not having kids now are much more nuanced, but the framework is the same."

The "biological clock" argument is a response that also sounds familiar to Emily, a 23-year-old based in Massachusetts.

"In a sentence, my parents' response was basically, 'Well, you're young and will probably think otherwise when you're older/married/financially secure,'" Emily told Mic.

That said, the first conversation can be scary, but most parents are more accepting than you may think.

Ryan, 30, first decided he didn't want kids when he was 25. But it took three years until he was ready to tell his parents about his decision.

"Initially, I thought it was a negative thing to [not want kids], so I didn't start vocalizing my opposition," Ryan told Mic. "My parents always expected that I would meet a nice girl, settle down, get married, and start a family. Every time I went out with a girl when I was in my mid-20s my mother would act like she should start making arrangements for welcoming a new member to the family."

For several years, Ryan kept quiet about his choice. But even so, Ryan is certain his mother already expected the news when he told her.

"I was at lunch at my parents' house," Ryan said. "Some comment was made about children and my mother looked across the table at me. I knew what question was coming: 'When am I getting grandchildren?' I interrupted her before the first word came out of her mouth and said in a dead serious tone, 'I don't want children.' She got quiet for a moment and just uttered 'I know' and we continued lunch as normal."

The conversation around not wanting kids is inherently gendered.

Emily, 23, only recently told her parents she didn't want kids — and was in the unique situation of telling them soon after her twin brother delivered the same message.

"There is a bit of a gender gap in their response," Emily said. "For my twin brother... my parents believe that he will 'come around' if his future wife wants kids. For me, I was her last bastion of hope to have adorable grandkids. Now she's depending on the ol' biological clock to kick in twelve years from now, which is a bit more inevitable than my brother's hypothetical marriage."

The good news is, most parents seem to come around in the long term. "I appreciate that after many years — about a decade — my parents came to respect a decision that I did not take lightly," Constanza said.

"Ultimately, I'm lucky to say that they'd accept any decision I make with my own life, kids or not," Emily said. "But I know that they'd secretly prefer to spoil some little ones down the road."

"Knowing this about my mom also made me understand that I'm not the only one who feels this way."

You might just learn something new about your parents in the process.

Some parents go beyond being supportive of the decision to downright embracing it. That was the case for Susan, a 22-year-old living in the San Francisco Bay Area.

"I knew that I didn't want to have kids since I was 16 years old," Susan told Mic. "I first mentioned it to my mom then, but I imagine she shrugged my speech off as part of teen angst."

Susan didn't approach the topic again until her junior year of college, during her weekly phone call with her mom. This time, it was Susan who was surprised.

"I found out that my mom also did not want to be a mother," Susan said. "My mom is a Chinese immigrant from Taiwan, and she felt strongly compelled to have a family for numerous reasons. If she had more agency over her life, she felt that she wouldn't have had any kids."

To this day, Susan still doesn't know how her dad might feel about her choice — but she's developed an open and honest dialogue with her mom on the issue.

"I left the first conversation feeling heard and validated," Susan said. "I think my mom also felt relieved to share information that seemed to have burdened her for some time. Knowing this about my mom also made me understand that I'm not the only one who feels this way."

Once you've convinced your parents, the in-laws are a whole different battle.

Once you settle down with a partner, their parents can pose an entirely new challenge. Angela, a 23-year-old living in Santa Cruz, California, has experienced this firsthand.

"With my husband's family it definitely has come up, especially since he has a big family on his dad's side," Angela told Mic. "My mother-in-law ... knew it's primarily my idea of not wanting kids, so she asked my husband many times and confirmed with him many times that having kids is something we don't want and not just what Angie doesn't want."

Luckily, Angela's sister-in-law has now had children. That has relieved some of the pressure — though she still doesn't think her father-in-law is used to the idea. But she's not the only one who's experienced similar pressure with long-term partners.

"I have had the parents of previous partners berate me for potentially 'depriving them of grandkids,'" Constanza said. "The guilt trips from sources like that have been huge. At points, I've caved and said that I'd think about it, but then I remember that my life and body are not here for the convenience of anyone other than me."