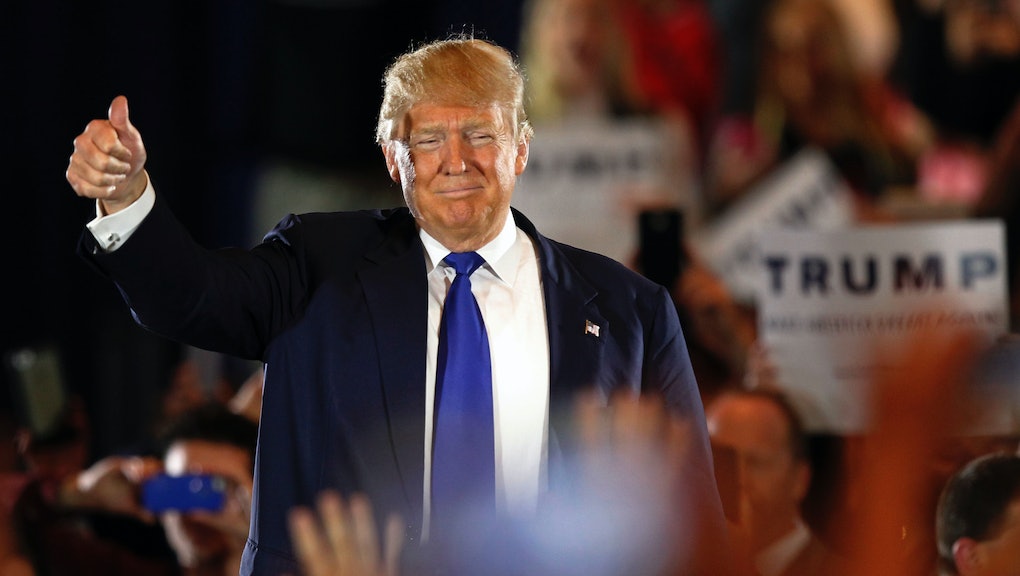 Trump Supporters and Black Activists Had a Surprisingly Chill Talk About Race in St. Louis

A small group of Donald Trump supporters met with a handful of black activists on Friday and no one got hurt, according to the Guardian. The impromptu sit-down happened in St. Louis shortly after Trump's rally at the Peabody Opera House.

Multiple fights had broken out on the street, but even though tensions were high and voices were raised, folks who gathered in a nearby tent seemed open to listening and having a civil dialogue.

The discussion turned quickly to racism in America and use of the controversial term, "All lives matter." Here's 33-year-old musician Tamara "Bates" Dodd explaining to 50-year-old Rudy Kelsey why the phrase is so dismissive of black concerns:

Dodd added — in so many words — that empathy is key to any productive discussion about black lives:

One of the biggest differences between "black lives matter" and "all lives matter," Dodd explained, is experiential: Not everyone is going through the same thing.

Kelsey, a self-described "self-made millionaire," told the Guardian that although he was at the Trump rally, he is not entirely sold on voting for the businessman yet — though he insisted he'll vote Republican.

The conversation went on longer off-camera, with Dodd and Kelsey trading questions ranging from police violence to the national conversation around race. "So, in your opinion, did Obama take the country forward on racist matters, or backwards?" Kelsey asked Dodd at one point, according to the Guardian.

"I think that Obama has nothing to do with it," Dodd replied. "Actually, right now, I'm having more great conversations like this one than I was having five years ago."

Despite the apparent goodwill generated in the course of this discussion, it was clearly an anomaly: Trump rallies across the United States have been marked not only by ideological tension between anti-Trump protesters and Trump supporters over the past few months, but by actual, physical violence as well.

Trump regularly has demonstrators forcibly removed from his rallies by security guards. At a recent Trump event in Fayetteville, North Carolina, one Trump supporter sucker-punched a black protester in the face as the protester was being led out of the arena by officers.

Along with Trump's virulent rhetoric against Muslims and Mexicans, incidents like this have fueled concerns about Trump attracting violent white supremacist elements to his rallies — and to his presidential run. He's even been endorsed by David Duke, a former one-term Louisiana state representative and former grand wizard of the Ku Klux Klan.

But protesters have made strides of late to slow Trump's seemingly inevitable bid for the Republican presidential nomination. So many demonstrators showed up to his rally in Chicago on Friday night that Trump had to cancel it, citing concerns over security: