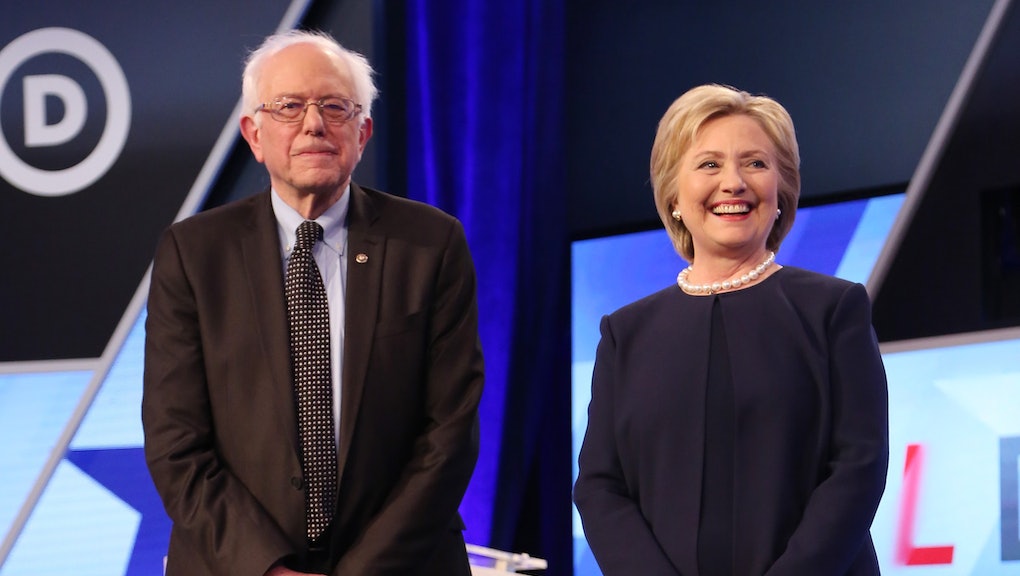 One week after upsetting the political world with his come-from-way-behind victory in the Michigan primary, Bernie Sanders is locked in neck-and-neck contests with Democratic frontrunner Hillary Clinton in three key Midwestern states, recent polling shows.

With five delegate-rich states set to vote Tuesday, Sanders stands a not-small chance of pulling off wins in Missouri, Illinois and Ohio — victories that would fall short of upending the fundamental dynamics of the race but would nevertheless underscore the Vermont senator's durability as a progressive insurgent.

Read more: March 15 Primaries: Here's Where Bernie Sanders May Surprise Us Next

Where Clinton likely wins: The former secretary of state is all but a lock to win the primaries in North Carolina and Florida, where the latest surveys give her a decisive advantage.

According to the RealClearPolitics polling average, Clinton bests Sanders 61% to 32% in Florida and 57% to 33% in North Carolina.

Sanders country? While Clinton is decently positioned elsewhere, those may be her only two wins on Tuesday night.

Sanders hoped that his surprise victory in Michigan would portend another upset in Ohio, a demographically similar Rust Belt state receptive to populist economic pitches. And the latest polls of the Buckeye State show that it's trending away from Clinton.

While an NBC News/Wall Street Journal/Marist poll released over the weekend showed Clinton leading 58% to 38%, in line with previous surveys, three subsequent polls have shown a single-digit race. According to RealClearPolitics, Clinton's advantage over Sanders has been cut to just 50% to 43%.

An even more striking turnabout appears to be underway in Illinois, where a Chicago Tribune poll earlier this month gave Clinton a 67% to 25% lead. Sanders' Michigan victory and his hard-hitting attacks on unpopular Chicago Mayor Rahm Emanuel, whose school closures have alienated minority communities, may prompting voters to give him a new look.

New polls from NBC/WSJ/Marist and Public Policy Polling find Clinton leading by single digits, while a CBS News/YouGov survey released over the weekend actually found Sanders ahead, 48% to 46%. The RealClearPolitics average attests to what a toss-up the race is, giving Clinton a slim 48% to 46% lead.

Meanwhile, neighboring Missouri may show Sanders some Show Me State hospitality. A Fort Hays State University poll last week gave Clinton a 47% to 40% edge, but that survey sampled only 145 likely voters. A Public Policy Polling survey with a sample nearly six times that size, on the other hand, showed Sanders edging Clinton 47% to 46%.

Still uphill: Even if Sanders wins the three states, though, Clinton will wake up Wednesday morning with an overwhelming advantage in the delegate count.

Clinton leads Sanders 748 to 542 in the pledged delegate count; add superdelegates, and her lead grows to 1,231 to 576. It takes 2,382 delegates to secure the Democratic nod.

To erase that lead, Sanders needs to start winning large states by the landslide margins Clinton is racking up throughout the South. Single-digit victories in large industrial states may point to persistent enthusiasm for Sanders' progressive message, but they won't be enough to overcome Clinton's built-in advantage, given that Democratic delegates are all awarded proportionally.

But while victories in Illinois, Missouri and Ohio won't suffice for Sanders, such wins were virtually unthinkable a little more than a week ago. In a race that's proven nothing if not surprising, more twists and turns may lie ahead.