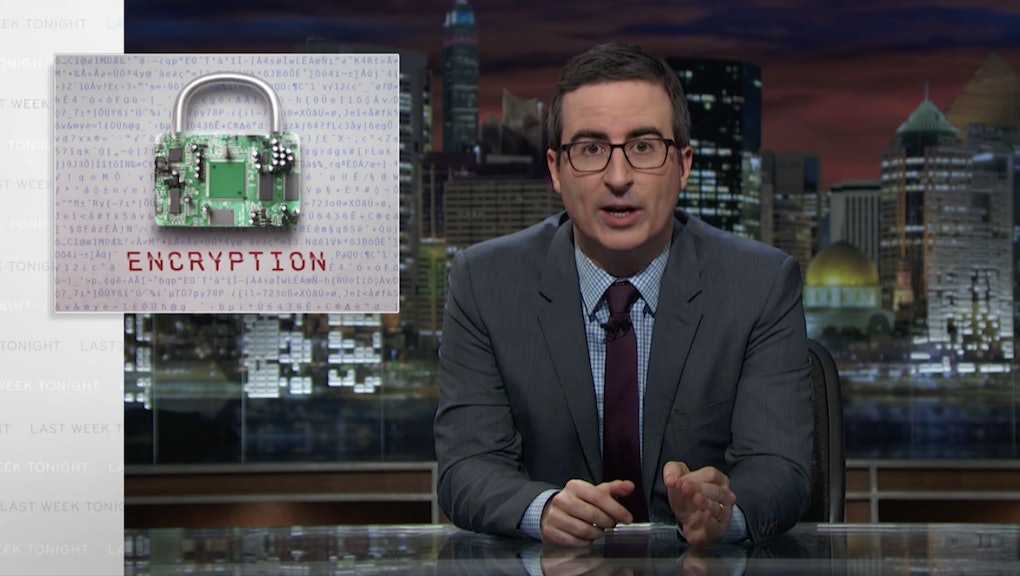 John Oliver Says Apple Is Right in Its Fight Against the FBI — And He'll Convince You, Too

During Sunday's episode of Last Week Tonight, John Oliver tackled the complicated issue of how accessible our technology should be to law enforcement.

This topic has been hotly debated since mid-February when Apple refused to comply with the Federal Bureau of Investigation's request that the company provide access to a San Bernardino shooter's iPhone. Apple CEO Tim Cook explained the decision in an open letter, which garnered strong reactions on both sides of the debate.

Read more: The Lowdown on Encryption and the Technology Driving the Apple-FBI Faceoff

"The FBI and its supporters can be weirdly dismissive of [the encryption] issue, in ways that indicate they either don't fully understand how technology works — or are pretending not to," Oliver says, before playing segments of FBI proponents who argue the hypothetical key to override Apple's security system could simply be deleted after accessing the phone in question.

"As for the notion Apple can throw the formula away after the FBI uses it once — nobody seriously thinks that is going to happen," Oliver notes.

"For the sake of arguments, let's assume Apple could have access to your encrypted data, repeatedly help law enforcement and always keep the bad guys out — which, again, is widely thought by experts to be impossible — that still won't solve the FBI's 'going dark' problem," Oliver says. "Because if you really want to keep your communication secret, there's an app for that."

The FBI's request would, Oliver argues, weaken the encryption upon which millions of people rely and set a troublesome precedent.