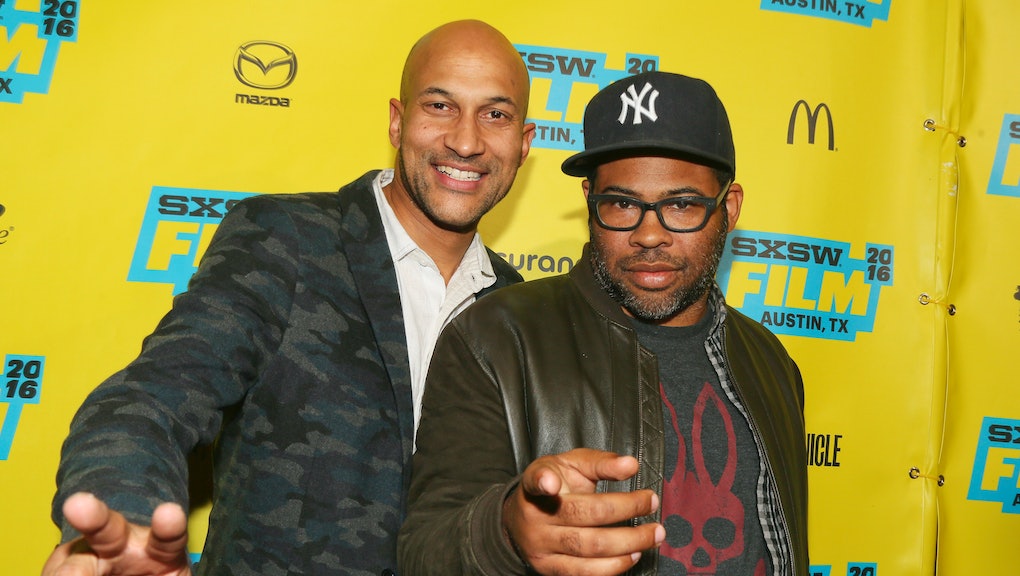 It seems like it should be an unbeatable combination: Key and Peele plus one tiny kitten. That was the formula behind the comedic duo's new film, Keanu, which premiered as a "work-in-progress" at the South by Southwest Film Festival Saturday night, the Los Angeles Times reported. However, according to reviewers, the film didn't quite hit its mark.

Despite boasting many of the same names that made the Mad TV alums' Comedy Central show — which wrapped up indefinitely in September — a success, Keanu's premiere left audiences disappointed. Keegan-Michael Key and Jordan Peele both produced and acted in the film, with Peele also serving as its co-writer. Peter Atencio, who directed every episode across all five seasons of Key & Peele, directed the film, and he spoke to the Los Angeles Times about what they wanted the movie to do.

"The thesis of the show in a lot of ways was identity and where people feel comfortable and code-switching and different forms that identity can take on," Atencio said. "And that extends to the movie, and especially when it comes to masculinity and the expectations of men, and especially African American men, and how that changes depending on the context of their situation."

Which is apparently how Keanu makes its most interesting social commentary, even if it doesn't clearly crystallize what it really wants to say," as the Daily Beast's Jen Yamato wrote.

The film follows man-child Rell (Peele), who's reeling from a breakup when a kitten shows up on his doorstep and pulls him back from the brink. Christened Keanu (as in Reeves), the cat baby quickly becomes Rell's saving grace. So when Keanu gets kidnapped, he and his bosom buddy — the straight-laced Clarence (Key) — launch a rescue mission that takes them way outside their comfort zones, embroiling them in gang activity and undercover action.

Posing as gangsters forces both to adopt entirely foreign demeanors and offers up an opportunity for the pair to play around with racial stereotypes. That's the kind of thing they did on Key & Peele, often making statements about social inequities and preconceptions in the process.

"And yet," Yamato wrote, they "illustrated the self-editing nature of contemporary black identity far more concisely — and in under a minute — on their show."

Indeed, it seems to be the length that tested reviewers' nerves. "Keanu, which clocks in at just over 90 [minutes], wears out its welcome after about 10," Nigel M. Smith of the Guardian wrote, "once the titular ridiculously adorable kitten gets kidnapped, setting off a violent chain of events that fails to coalesce." The feeling seems to have been that the joke was allowed to go on for entirely too long.

In Yamato's words: "'Gangsters can haz kitty?' only gets you so far."

Luckily, as the Los Angeles Times reported, the comedians pledged in their SXSW pre-screening address that they would change the film if it didn't resonate with the audience. So I suppose we have Keanu 2.0 to look forward to, then?