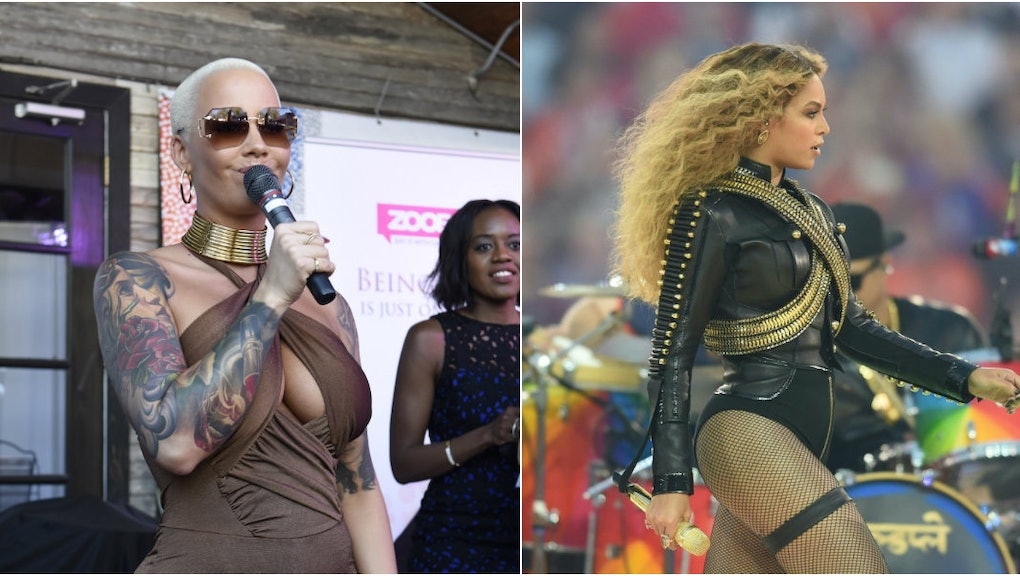 Today, Rose added to her arsenal of anti-slut-shaming soundbites in a new interview with the Daily Beast. Rose shone a light on the double standard between how society views pop stars like Beyoncé, who are allowed to go onstage and own their sexuality without judgment, and how it views women like herself and Kim Kardashian West:

It's bullshit, and this is the thing: They come at me and Kim so hard because I was a stripper and she had a sex tape ... We all love Beyoncé, but she's on stage half-naked and twerking all the time, yet people say, oh, she has talent so she's able to do that.

Rose went on to point out that men like Channing Tatum, who has frequently publicly discussed his past as an exotic dancer, is not subject to nearly the same amount of slut-shaming as she is:

No one gives a fuck that Channing Tatum was a stripper. He's an established actor who's at the Vanity Fair parties and the Oscars, but for me, no matter how far I go in my life, I see these stories that keep referring to me as a "former stripper." No one says "former stripper" about Channing Tatum, or "former McDonald's worker" about Brad Pitt. No one does that to men.

It's worth mentioning that people call Beyoncé a slut on social media all the time, as even the queen herself is not totally safe from the misogynistic crosshairs of a Twitter egg avi. But Rose's point that society, as a whole, is more willing to embrace overt displays of sexuality from a pop superstar than it is from a former stripper is obviously indisputable. Has anyone ever broken up with Beyoncé and then said they "had to take 30 showers" to cleanse themselves of her dirty slut germs? Probably not.

Despite Rose's many successes as a businesswoman, author, model, actress and anti-slut-shaming soundbite dispensary, the stripper stigma struggle continues. But at least she's not afraid to call it out.