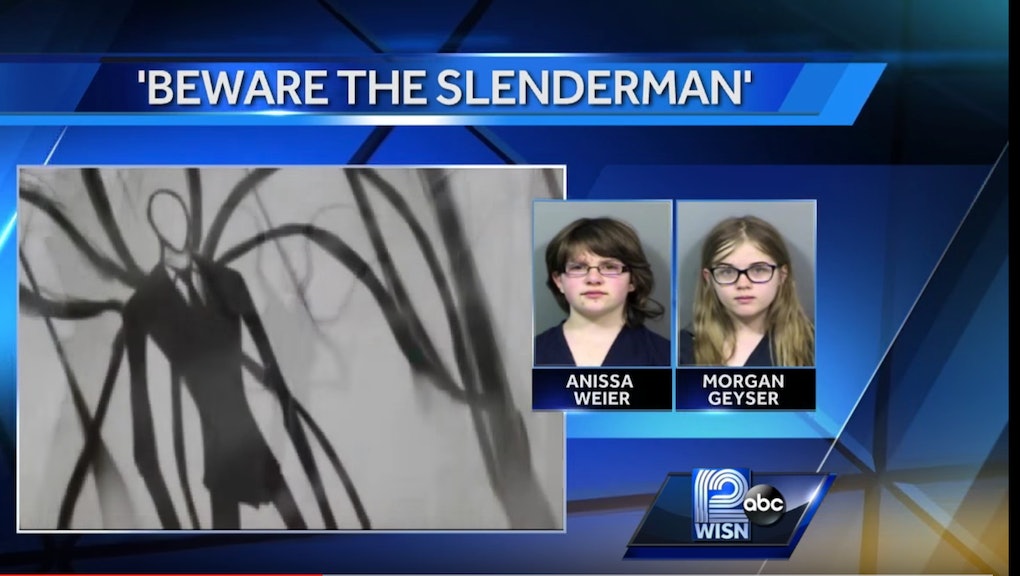 Whether you've played one of the many video game iterations of the character, or viewed the fan-made viral videos, chances are you've encountered Slenderman in some way, shape or form. The appropriately slender character, which internet lore suggests stalks children in the woods, is now the subject of an upcoming HBO documentary: Beware the Slenderman.

Specifically, the documentary isn't about the internet-crazed existence of the Slenderman. Rather, its primary focus is on a 2014 case in which two then-12-year-old girls who were charged with attempted first-degree homicide after stabbing their friend 19 times. When asked why they did it, they said it was to prove that the Slenderman was real.

However, Beware the Slenderman isn't presented as an indictment of the two girls — it's a horrifying look at the influence that the internet can have on the psyche.

Read more: The Internet Bogeyman Pictured Here Is at the Center of a Bizarre Midwest Murder Plot

The documentary, which premiered at South by Southwest on Friday, details the disturbingly blurred lines between fantasy and reality for the girls, and the broad scope of Slenderman's effect on the internet. Though the character is seen throughout the documentary, director Irene Taylor Brodsky said the production didn't have to create any concepts for Slenderman on their own — they were all readily available online.

"It's like he's a character in the book that not only has no photograph of him, so it's all your imagination, but in the games he's after you," Taylor Brodsky told Complex. "You are looking for him, but then before you know it, he's looking for you. The tables get turned very quickly. That's a very sophisticated kind of storytelling because it's not just a passive experience where the viewer is just going to be scared. It's like, the more engaged the viewer becomes, the more they are kind of contributing, especially if they are contributing content. Then they are just perpetuating the myth more."

One of the girls' parents expressed that their biggest regret is allowing their daughter to have such powerful technology at her disposal — in her case, an iPad. While there are other qualities that likely sparked the attack (Mashable notes that the documentary says one of the girls is being treated for schizophrenia), the internet is an inherent vice. Moreover, one of Beware the Slenderman's most chilling scenes depicts the internet's influence over the girls by examining one of their search histories prior to the stabbing.

"[The scene] traces her winding path between dozens of YouTube videos and comments —?? from 'Bunny Eating Raspberries,' to 'FEEDING MY SERVAL A LIVE MOUSE,' to several 'Are you a sociopath?' quizzes, to homemade Slenderman videos (some chillingly convincing!) and back to kittens," Kaitlyn Tiffany wrote for the Verge. "It's a powerful look into how a young, easily distracted brain will consume basically anything in the middle of the night. Almost anyone who spends significant time on the internet can recall an evening of hitting the bottom of a rabbit hole, with no idea how it happened."

Unlike The Jinx, HBO's most recent true crime success, Beware the Slenderman doesn't have a clear-cut villain. It's more a presentation of the power of a collective imagination, and what people can create and pass along from the darkest corners of the web with the internet at their disposal. The dark depths aren't just creepy — they're dangerous.

"I really don't think there's one single villain," Taylor Brodsky told Complex. "I think it's more of a perfect storm of the media, the age, the social isolation these girls were feeling, and also it's important to remember that Slenderman is a good idea. He's an idea. He's a character that somebody thought of. He's a good idea and part of the reason he's such a good idea is that he could be totally shaped and formed into what you need him to be."

Beware the Slenderman will debut on HBO, HBO Go and HBO Now later this year. The documentary doesn't have a trailer yet, however, the promotional poster below was released prior to SXSW.