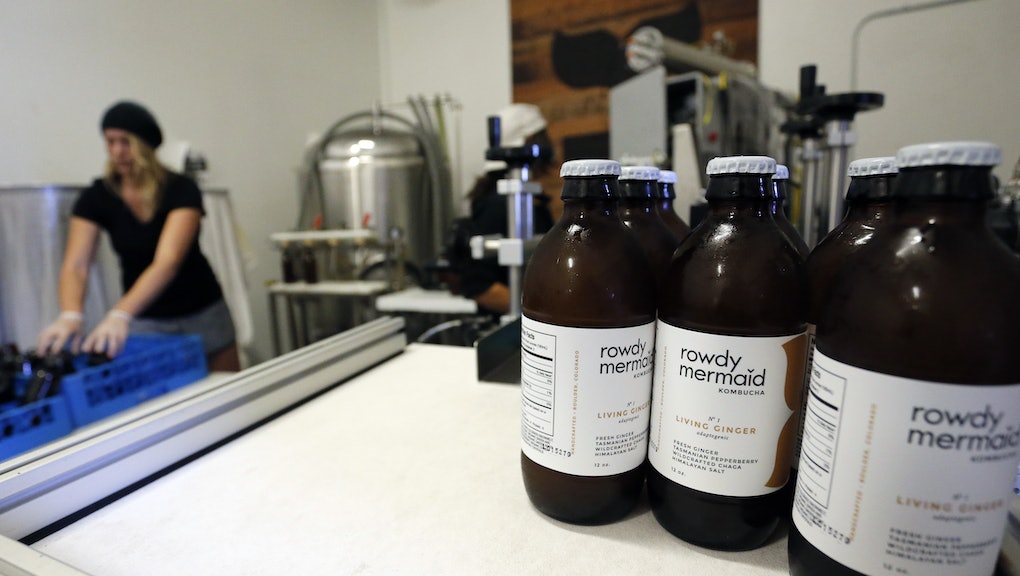 The Truth About Kombucha's Health Benefits

Kombucha, a fermented tea made with a culture of bacteria, yeast and a pinch of sugar is becoming increasingly popular among Americans. People have been drinking the mixture for 2,000 years, but the kombucha drink appears to be making a resurgence.

According to WebMD, the fermented beverages are packed with several characteristics: the drinks are high in acid and they contain sugar, vinegar, B vitamins, antioxidants that stem from the tea and small amounts of alcohol from fermentation. But no, you can't get drunk off of the tea, according to kombucha advocate Ed Rothbauer.

Read more: 5 Amazing Health Benefits of Cardio That Should Get You Off Your Ass and On the Treadmill

"No, no," Rothbauer, who owns High Country Kombucha in Colorado, told CNN in December. "I don't know if you've tasted kombucha, but it's not something that you drink bottle after bottle. You know, this is something that's fermented. It would be like trying to drink vinegar bottle after bottle. And you would have to drink eight bottles (of kombucha) just to get the buzz of one beer."

Although the unique mixture doesn't sound too appealing, some proponents of the drink have cited its health benefits, claiming that the drink can help with a host of ailments, like preventing cancer or improving digestion.

"Kombucha is a prebiotic, meaning that it supports the growth of beneficial bacteria — the probiotics — that are really important to good ecology in the gut," Dr. Greg Plotnikoff, a pediatrician at Minnesota Natural Medicine and co-author of Trust Your Gut, told the Star Tribune. "Gut health is the foundation of all health, so focusing on it is one of the best ways to be proactive about overall well-being."

However, there does not appear to be any specific research focusing on the health benefits many purport the fermented drink to have. Even though kombucha is rich in probiotics, or microorganisms that are thought to provide certain health benefits when consumed, there is no evidence that they survive the pasteurization process, according to the Washington Post.

According to Dr. Brent Bauer, director of the Department of Internal Medicine's Complementary and Integrative Medicine Program at the Mayo Clinic in Minnesota, there is no scientific evidence to support any health benefits that kombucha proponents claim. In fact, a 2003 review found no evidence that the drink contained any health benefits.

Kombucha tea made at home may possibly be linked to heart attacks and lead poisoning, while in other cases, can cause nausea and allergic reactions. "If you want to drink kombucha, a safer bet is to go for one that is commercially prepared and pasteurized," Janet Helm, a Chicago nutritionist, told WebMD.