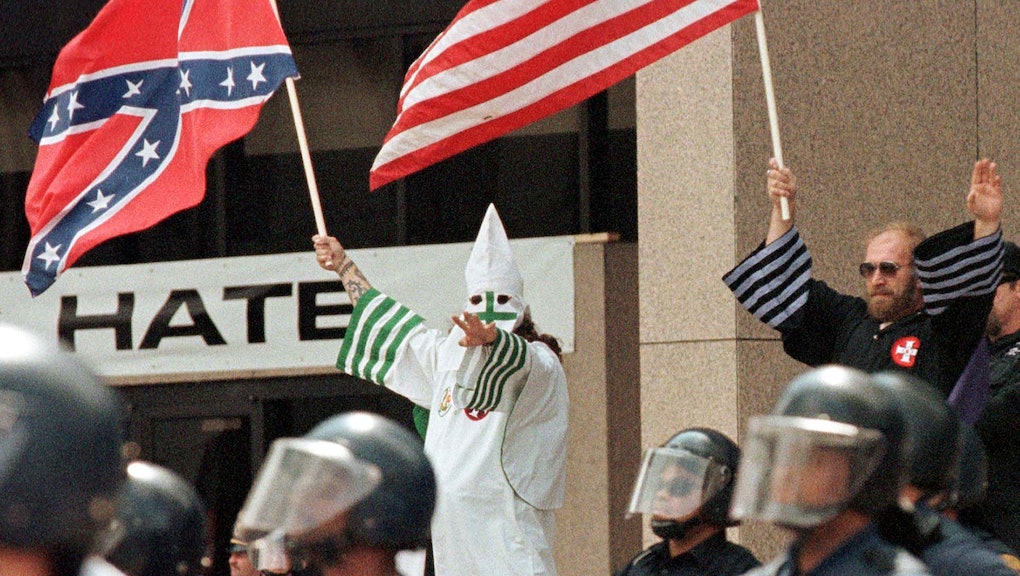 A grand dragon has endorsed Hillary Clinton — and his name isn't Puff.

The grand dragon of a California Ku Klux Klan chapter Will Quigg told the Telegraph he prefers Clinton to Donald Trump.

"We want Hillary Clinton to win," Quigg, a participant in February's ill-fated and widely-reported KKK rally, told the paper. "She is telling everybody one thing, but she has a hidden agenda. She's telling everybody what they want to hear so she can get elected, because she's Bill Clinton's wife, she's close to the Bushes. [But] once she's in the presidency, she's going to come out and her true colors are going to show."

"Border policies are going to be put in place," he added. "Our second amendment rights [favoring gun ownership] that she's saying she's against now, she's not against. She's just our choice for the presidency."

While it's true that Clinton has faced accusations from the conservative movement of lying over the course of her political career, typically such charges are not meant as a compliment.

It's possible Quigg genuinely thinks Clinton is a better advocate for his ideologies than Trump, but it's also possible the grand dragon has another agenda in the works.

As the Telegraph notes, Quigg's endorsement seemingly contradicts his own prior support of Trump on Twitter, where the Klansman called Trump "the only hope we have of getting WHITE AMERICA BACK!"

Trump's campaign has won him support and kind words from far-right organizations and fascist organizations, including the American Nazi Party and the Daily Stormer. In February, he approvingly retweeted a Mussolini quote — not much of a surprise from a candidate who regularly interacts with racists and fascists on Twitter.

Indeed, the real estate billionaire might be a better fit.