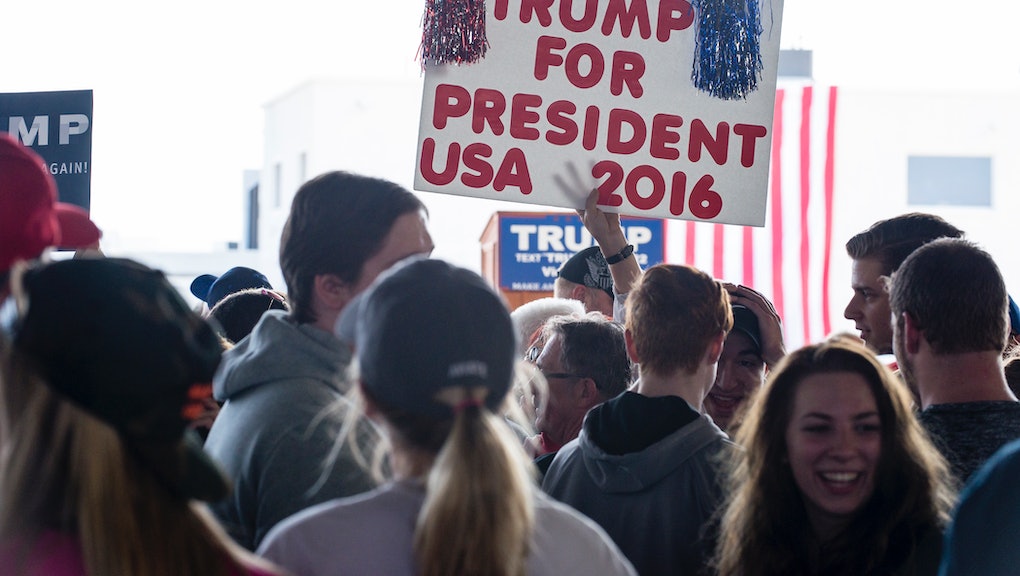 14 Scary Things That Could Happen If Donald Trump Becomes President

You've already broken your New Year's resolutions. You've lost the holiday cheer. And the day before, Donald Trump fulfilled his promise to "make America great again" when he was inaugurated as the 45th president of the United States.

Considering it's extremely cost-prohibitive to emigrate to Canada, your only option is to live under the policies Trump has outlined as part of his primary campaign. While we know it would be hard for many of his bombastic proclamations to be signed into law, here are just a few worst-case scenarios.

A great wall to look at.

Eight Syrians were just caught on the southern border trying to get into the U.S. ISIS maybe? I told you so. WE NEED A BIG & BEAUTIFUL WALL! — Trump on Twitter

You wanted a great America, you got one. In fact, America now has one of the biggest tourist attractions, the 10th Wonder of the Modern World — the Great Wall of Mexico. Obviously jealous of the architectural grandeur and touristic popularity of the Great Wall of China, Trump's promise to build a wall was made a reality and now not only do Americans have national security, we have a great photo op.

Mosques are things of the past.

It's no secret that ever since Trump's particular brand of Islamophobia has been introduced to the public, there's been a noticeable upswing in anti-mosque attacks and anti-Islam violence. Whether it's leaving severed pigs' heads or wrapping doorknobs in bacon, 2015 is the worst year of anti-mosque sentiment on record. This will only get worse.

Freedom of the press is curtailed— a First Amendment right.

"Look at those cameras, how they're turned!" he screamed. "They never, ever turn. They will never show how big the crowd is unless there's a protester because they're the most dishonest people you'll ever see." — Trump at a Louisiana rally

In case you haven't noticed, Trump kind of openly despises the media. And while we do have freedom of the press in America, there are plenty of ways Trump has found ways to lawfully suppress the press, like excluding certain members of the press from his conferences. Which, hey, probably rings a bell if you're Jorge Ramos.

The world will begin a slow, toxic meltdown never before witnessed in human history.

"Environmental Protection, what they do is a disgrace. Every week they come out with new regulations." — Trump on Fox News Sunday

We hope you like polar bears and toxic water because you'll be seeing a lot more of both. Without the federal Environmental Protection Agency, many of the natural and manmade disasters Americans face could be even more devastating. Think Flint, Michigan, without any plan to address it or global warming gone haywire.

Getting an abortion will be impossible.

Trump actually doesn't hate Planned Parenthood. In fact, he's acknowledged they do a lot of good when it comes to making sure women get screenings for breast cancer and cervical cancer. But, he'd still defund it faster than you can say, "But they do so much more!"

Political correctness will save us all.

"I think the big problem this country has is being politically correct. ...I've been challenged by so many people and I don't, frankly, have time for total political correctness. And to be honest with you, this country doesn't have time, either. ...And frankly, what I say, and oftentimes it's fun, it's kidding. We have a good time."  — Trump at the first GOP debate

If I'm elected I would be very strong in putting certain judges on the bench that maybe could change things, but they have a long way to go. At some point we have to get back down to business. But there is no question about it. And most people feel this way. They have ruled on it. I wish it was done by the states. I don't like the way they ruled. I disagree with the Supreme Court in that it should be a states' rights issue. — Trump on Fox News

The burdens of marriage — an expensive ceremony, name-changing drama and the potential for divorce — have been lifted off LGBTQ communities' shoulders once and for all thanks to President Trump, who fulfilled his promise to overturn marriage equality.

Without the tulle-lined burden of marriage, gays are able to fulfill their next duties: We've been drafted to work in Trump's official work camps where we make Trump-themed memorabilia!

Hey, people of color, hope you like even more policing.

"Police are the most mistreated people in this country." — Trump to a GOP debate audience

While you're hard pressed to find a Republican who doesn't believe in law and order, Trump has actually put his love of police into action, using them to throw out protesters of his increasingly rowdy rallies. Even though Black Lives Matter has made police brutality a cornerstone of its organizing, and the police killed 1,134 black youth in 2015, Trump has promised to "give power back to the police" because of "rampant" crime.

The Department of Education is just — bye.

"We must keep education local and under parental control. Unelected Washington bureaucrats shouldn't determine what is best for our children." — Trump on the Department of Education

Sure, there are a lot of problems with the Common Core. But Trump's assertion to cut the Department of Education would lead to a lot of other problems: no more college Pell Grants, no one to enforce civil rights laws, no one to check rampant inequality, no one to check racial or gender disparities — the list goes on.

The world will hate us.

Aside from a best friendship with Russian leader Vladimir Putin, Trump is already pretty bad at making friends of international leaders. A Mexican ex-president has used profanity to say what he thinks of Trump's idea of a wall — and that Mexico should pay for it. And we all know what Trump thinks of China. The sad part is that Trump's bad America PR campaign will come right after America's image abroad is finally doing better after a mid-2000s dip.

Trump will resurrect Antonin Scalia via Santeria. And he will make Mexico pay for it.

The totally unexpected loss of Supreme Court Justice Antonin Scalia is a massive setback for the Conservative movement and our COUNTRY! — Trump on Twitter

Trump misses Scalia, especially because his death may have thwarted his chance to overturn marriage equality. Maybe through the power of Santeria, Trump will revive Scalia and act his will on the American people. There are definitely some people in Trump's rallies who could help.

When Trump is president, the Second Amendment will come first.

"The Second Amendment to our Constitution is clear. The right of the people to keep and bear Arms shall not be infringed upon. Period." — Trump in October

It's all about jobs and freedom, you see. Guns bring manufacturing jobs and help Americans exercise their Second Amendment rights. Now, all you "right-wingin', bitter-clingin', proud clingers" of your guns, your god and your religion can have it all.

Hope you enjoy your measles.

"We have a disaster called the Big Lie — Obamacare."  Trump at his announcement

Here's a concerning combination — Trump is an anti-vaxxer. Now, when common diseases that we've worked to fight like measles come back, we won't have Obamacare to help us either. He wants to dismantle the historic Affordable Care Act ASAP.

You won't be able to support your family of four.

"I'm going to bring jobs back— You will even be surprised, Chuck, you will be very surprised. So that we won't even have to be talking about the minimum wage." — Trump to Chuck Todd.

Trump has every intention of keeping the minimum wage at $7.25 an hour, which means that a person trying to get ahead in the United States can expect an income of $13,926.83 after taxes for an entire year. While some cities and states are joining the "Fight for $15" minimum wages and Canada is experimenting with basic income, that will not happen in the good ole USA under President Trump.

Jokes aside, the consequences to poor people, immigrants, LGBTQ people, people of color, women, Muslims and more could be disastrous. America should be a place of refuge from persecution — not a place where persecution reigns.