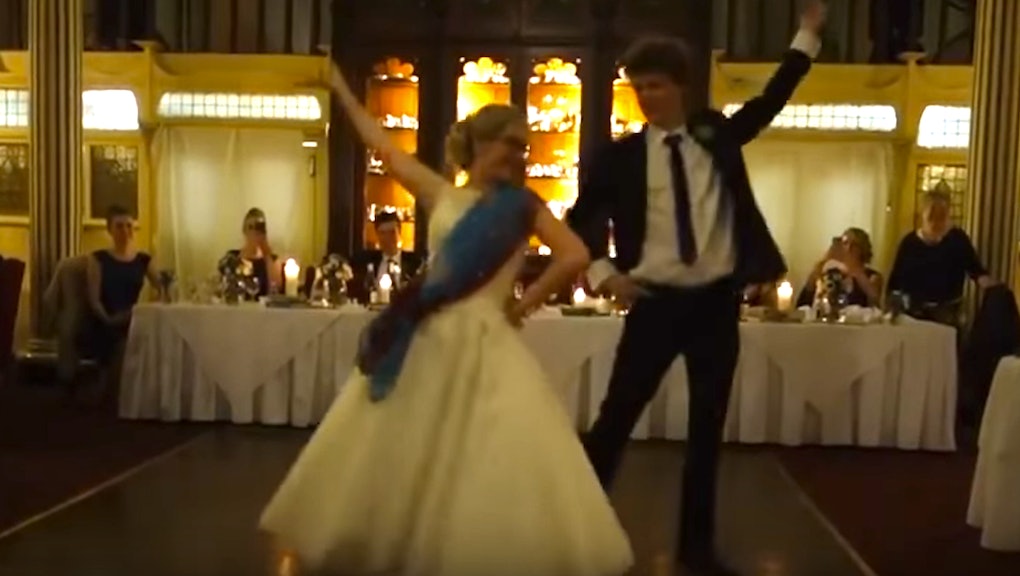 A video making the rounds on social media of a couple performing a choreographed Bollywood dance at their wedding reception is amassing millions of views and comments — but what does it mean when a couple incorporates a tradition from another culture in their wedding celebration?

The video, uploaded to Facebook last week on a page called "Spotted Besharam UK Asianz," apparently shows British newlyweds Dave and Carol performing a dance, joined by the rest of their bridal party, to the song "London Thumakda" from the 2013 Bollywood movie Queen.

Neither Dave nor Carol nor anyone in their wedding party appear to be South Asian, although they all seem to be having an awesome time. But is there something weird about what appears to be a bunch of white people celebrating with a type of dance that comes from another culture? Or is it just fun?

The fraught history between England and India certainly complicates this example: Britain's colonization of much of the Indian subcontinent left what many believe is a lasting legacy of colonial violence and exploitation.

More than half a century after Indian independence, Bollywood cinema is arguably one of modern India's most significant cultural exports: According to a 2011 report from Newsweek, "Bollywood movies and television shows command an estimated $3 billion to $4 billion in overseas receipts, placing India's film industry second only to Hollywood itself."

It's no surprise then, considering Bollywood's global popularity, that Dave and Carol would want to incorporate a Bollywood dance into their wedding celebration even if neither of them is Indian. But is it actually cultural appropriation for them to do so? The answer is sort of complicated.

Cultural appropriation generally refers to the act of taking a tradition out of its original cultural context, as in the case of these Bindi "costumes" that were pulled from shelves back in October, and some see cultural appropriation as a descendant of colonialism. However, Bollywood is arguably already removed from its original context because of its global reach, including to many non-Indian audiences — the Daves and Carols of the world.

It's also worth noting that the video of Dave and Carol, which was posted to a Facebook page with "UK Asianz" in the name, has garnered mostly praise, even from those who acknowledge the cultural gap. Commenters have left messages like, "It always looks cute when foreigners dance on Indian music," "Wooohooo [that] Bollywood makes whole world dance to its tune" and "Bollywood dances r quite the rage nowadays... awesome."

Basically the summation is, rock on Dave and Carol, as long as you acknowledge where your adorable Bollywood dance routine actually comes from (and you never, ever wear another culture's clothing as a Halloween costume).