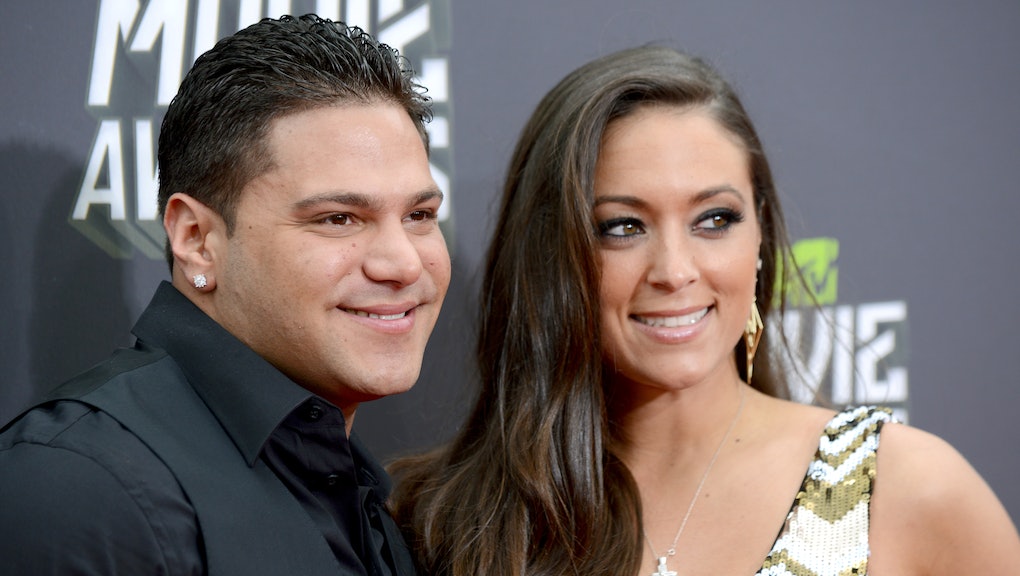 We've All Known the "Hometown Hero," the Once-Popular Guy Slowly Fading Into Obscurity

On Monday, March 14, various entertainment news outlets reported that Ronnie Ortiz-Magro and Sammi "Sweetheart" Giancola, the Elizabeth Taylor and Richard Burton of the MTV reality series Jersey Shore, were back together after having split up nearly a year and a half ago.

For those who watched Jersey Shore religiously back in 2010, you might recall that Oritz-Magro and Giancola had what is possibly the most toxic on-again, off-again relationship in reality TV history, constantly fighting and doing vodka shots and screaming expletives at each other and having sex with other people purely out of spite.

But they also were reflective of a familiar relationship dynamic that we see unfold over and over again in real life; Sammi and Ronnie are the popular kids from high school who constantly cheated on each other, but kept getting back together because they like just can't quit each other and anyway, her dad is writing him a recommendation for Penn State. They're the two people that hook up at the Thanksgiving weekend reunion every year, and they think they're keeping it a secret even though they're totally not.

Ortiz-Magro and Giancola are each other's Hometown Heroes.

At first glance, the Hometown Hero is an all-too-familiar pop culture trope: the fading quarterback or prom king who, for a brief period of time, is the dazzling sphere around which all the smaller, less confident, more zit-prone stars orbit. When graduation rolls around, the Hometown Hero loses his gravitational pull. Eventually, he violently contracts into himself and disappears into oblivion, or he develops a minor Oxycontin problem and takes a job doing IT for his girlfriend's dad's company, whichever comes first.

In its platonic form, the Hometown Hero is a staple in teen romantic comedies — Billy from Romy and Michele's High School Reunion is a Hometown Hero, as is Mike Dexter from Can't Hardly Wait or Matthew McConaughey in Dazed and Confused — and quiet, deeply moving dramas — think Biff Loman, or Lester Burnham in American Beauty.

But really, the Hometown Hero is anyone who is popular and successful in one given context, who finds it difficult to replicate that success when placed in another. This lack of adaptive skills is sometimes evidenced professionally; say, if you move from a small town to a big city, or if you leave a job for another opportunity that doesn't pan out.

Sometimes, he spends years trying to strike out on his own and flailing (see: Ringo Starr's post-Beatles solo oeuvre). Sometimes the Hometown Hero gets a triumphant return, as was the case with former Saturday Night Live cast member Darrell Hammond, who spent a record 14 years on the show only to come back as the show's announcer five years later.

But what truly defines a Hometown Hero is someone who, in their most comfortable environment, manages to capture everyone's attention — and often their romantic affections. You might have encountered the Hometown Hero fairly early in your romantic career; if they weren't your first love, they were your second or third. He might be the burnout ska musician you were in love with when you first moved to the city; the older guy who picked you up from fourth period and took you out for Ethiopian food before quietly taking your virginity in your bedroom while your parents were away; the girl in your dorm you were massively jealous of who wore purple eye makeup and ripped tights and had 10,000 followers on Instagram.

What makes them a Hometown Hero is that you met them at your youngest and least confident, when the world seemed full of possibilities all just out of reach, when both everything and nothing seemed eminently possible. Even when you grow up and realize the ska musician had no talent, the girl with ripped tights had bipolar disorder and the guy who took your virginity was just a pervy saddo who couldn't fuck women his own age, for a while you'll see them as who they once were: the brightest star in your orbit.

But there is hope for the Hometown Hero yet, if he joins forces with another Hometown Hero, another big fish who refuses to leave their small pond, another person who wants to keep both feet firmly planted in the glory days.

In the case of Sammi and Ronnie, they started out together a long time, and they never grew up or out of each other. They can look in each other's eyes and see their former images reflected back at them, two spray-tanned mirror images of one another, forever the brightest, biggest stars in each other's orbits.