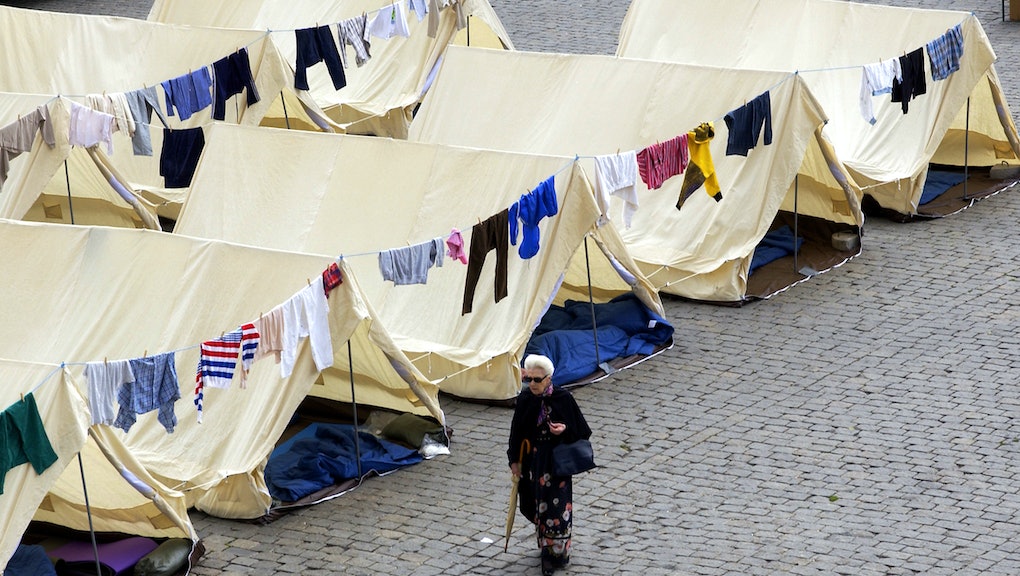 Norway doesn't exactly have the best track record when it comes to Syrian refugees — but this brings it to a whole new level.

After accepting thousands of migrants into the country, the Norwegian government announced in November it would deport refugees coming from countries they deemed safe, starting off with sending 13 back to Russia. Later, officials in Troms suggested they would consider taking refugees' valuables to make up the cost of their stay.

But a group in Norway has been trying to make more of its residents sympathetic to refugees' plight by having them experience it firsthand — sort of — since 2004.

According to the Local, an organization called Refugee Norway recreates the experience of being in a refugee camp for a slew of Norwegian teens whose parents want them to learn a valuable lesson. Participants must surrender their cell phones and electronics and are then grouped into "families" of 20 before embarking on their simulated 24-hour journey.

They set off from an old military camp near Oslo Airport and walk for miles in freezing temperatures, occasionally stopping to rest in what they think are safe camps before border officials uproot them.

"If you read about refugees, you'll remember about 20 percent," Refugee Norway founder Kenneth Johansen told the Local. "And if you experience it, you'll remember 80 percent. You will learn it for the rest of your life."

But while human compassion of any kind is a huge plus, some might say simulating a refugee's experience bleeds into the tenuous territory of poverty tourism. The practice usually involves physically traveling to a place like India, observing slum life firsthand, and then packing up and heading home to a more comfortable lifestyle.

And though the teens at Refugee Norway aren't gawking at any Syrian refugees, the website's description of "the roleplay 'refugee'" experience as one that gives "participants an opportunity to establish connections through play, fun and joint adventure," is troubling.

The site Tourism Concern states this about slum, or poverty tourism: "The motivation to undertake this kind of experience is only related to voyeuristic consumption of poverty and ... the basic human rights of the local residents to dignity and privacy are often undermined."

The road to hell, after all, is paved with good intentions.