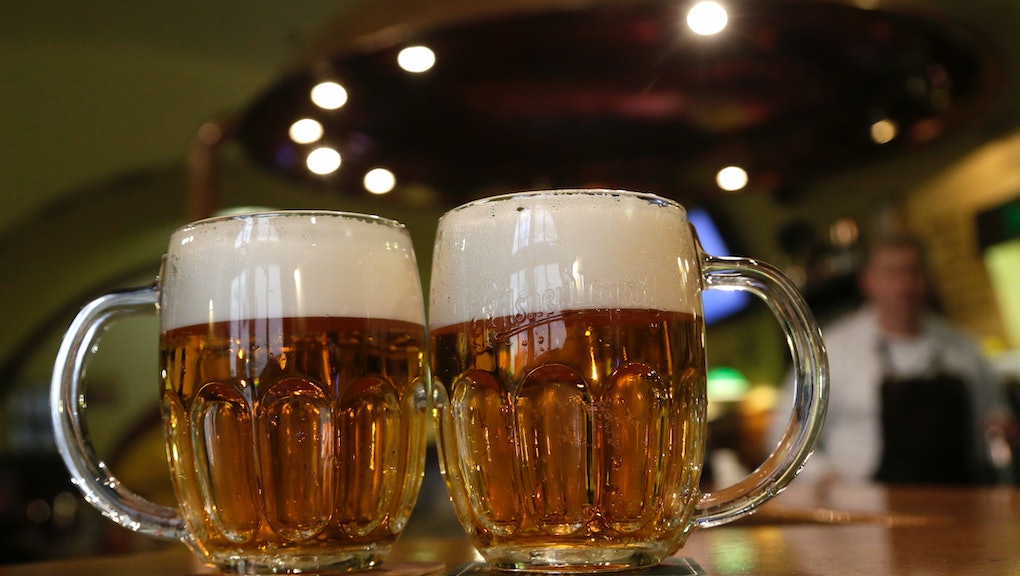 Can Beer Fight Cancer? Here's What Scientists Have Discovered About Hops

If their findings are correct, researchers at the University of Idaho may have earned themselves one hell of a toast. According to U of I's research, the chemical properties of beer may help in the battle against cancer, due to acids in hops called humulones and lupulones that may have both anti-cancer and anti-inflammatory properties. The University's team of researchers presented their findings during the American Chemical Society's 251st National Meeting & Exposition on Monday.

"When researchers extract healthful chemicals from hops, they first have to determine whether they have separated out the specific compounds they're interested in," explained Kristopher Waynant, Ph.D. and project lead, in a press release. "But if you can figure out how to make these compounds from scratch, you know they are the right ones."

Read more: Scientists Have a New Way to Fight Cancer: Blowing It Up

For U of I's team of scientists, the research is not over yet. The aim is to synthesize the two compounds found in hops: humulones (alpha acids) and lupulones (beta acids). The challenge that remains is to successfully separate the acids from the hops and to create an analytical standard for each, which would be a first. The next step would be to synthesize the compounds in the lab for pharmaceutical purposes.

This isn't the first time researchers have eyed beer for its potential health benefits.

Reporting on a number of studies, the Telegraph points out that beer has been found to reduce the risk of kidney stones, heart attacks, strokes, diabetes and Alzheimer's, while also strengthening bones, treating cataracts and curing insomnia.

Of course, multiple studies caution that too much alcohol can bring more harm than benefit to a person's health. One study from the Indiana University School of Medicine exploring the effects of beer on insomnia showed that a tablespoon of beer is all it takes to release dopamine in the human brain, which can help a person feel more relaxed and therefore more able to fall asleep.

"We believe this is the first experiment in humans to show that the taste of an alcoholic drink alone, without any intoxicating effect from the alcohol, can elicit this dopamine activity in the brain's reward centers," said David A. Kareken, neurology professor at the Indiana University School of Medicine and Ph.D., according to a press release.

Though researchers at U of I will need to continue studying the potential anti-cancer properties of hops, early findings are promising. And, according to the press release on the hops findings, "researchers say they are getting very close to optimizing the complete method for producing humulones in the lab" — meaning you may not even have to drink beer to gain the health benefits of hops in the near future.

So until then, drink up. Cheers.