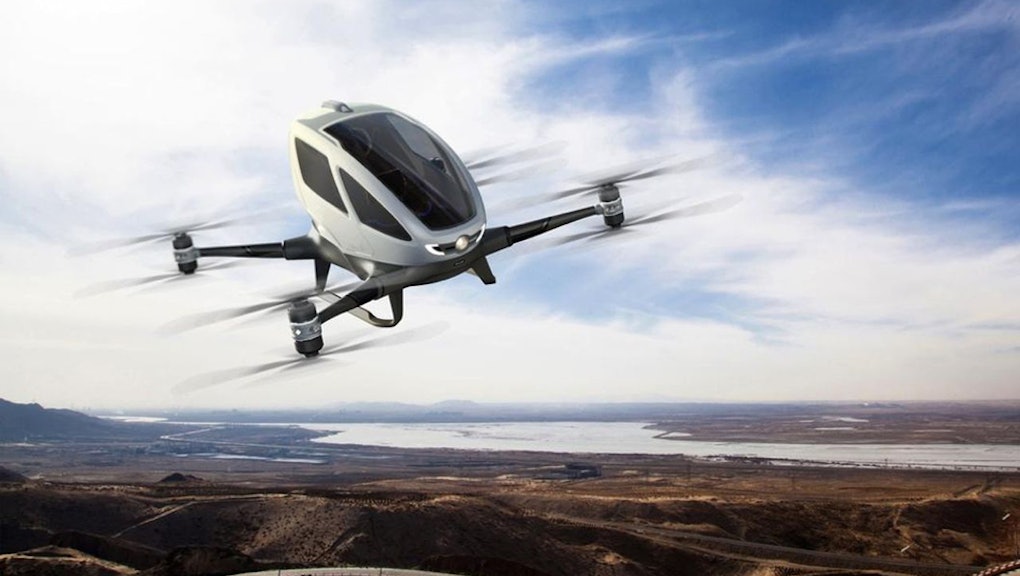 "Human-Carrying Drone" Is Definitely Just a Helicopter, and a Terrible One

But real quick, before we get started on building the future, we have to call bullshit.

Earlier this year, at the world-renowned Consumer Electronics Show, Chinese company Ehang unveiled the show-stopping Ehang 184 the world's first "passenger drone." Let's be straight about something: This is just a helicopter. And it's a terrible helicopter.

Sure, drones are hot right now. Like all bros with dubious hobbies, drones race, fight and take GoPro footage at every hot vacation destination. If you're a small company looking to raise sky-high funds to create moonshot projects, you're going to want to call whatever you're working on a drone. If it takes selfies, that's even better — take it to the bank.

So CNN got a chance to ask Ehang COO George Yan what he would say to someone who thought the Ehang 184 looked like, say, just a helicopter.

"When it has four arms and eight propellers, from a design principal perspective, this is the safest way for you to uplift in the air," Yan, who won't disclose how many people have actually flown in it, replied. "We have the backup systems for each one of the propellers, so if one of the propellers malfunctions in the air, the other ones are able to calibrate and gradually descend as we go."

That explanation — that four propellers are safer because you've got backups — doesn't just dodge the question, "Why is this not a helicopter?" It's also not aeronautically sound.

Bad Helicopters: Four separate propellors work for little drones because they're little. There's not much weight to carry, and four rotors keep the drone steady through quick horizontal and vertical maneuvers.

But bigger payloads that need to go point-to-point are more stable with a single, powerful rotor that pulls from the vehicle's center of gravity. If you're having trouble envisioning what this kind of system would look like, picture a helicopter.

"No Quad long range aircraft exist because it makes no sense from a design perspective to do so," aviation expert Doug Hanchard wrote about exactly this subject.

But all of that is beside the point, because even when you have multiple rotors on a helicopter, it's still called a helicopter. Helicopter = helix + pteron = spiral-winged. Get it straight.

The Case for "Drone": The feature that really sets the Ehang 184 apart from other helicopters is that it's meant to be self-flying. You just tap a point on Google Maps, and it takes you there — fictionally, of course, because Ehang says the only way they can pull that off is by building control centers all over the planet first.

There isn't any reason why you couldn't install that kind of self-navigating system in a modern helicopter someday, the way some auto manufacturers are working on self-driving cars without quadrupling the number of wheels.

So the only justification left for calling it a drone is that it looks like something else we already also call a drone. But this gets worse: Leaders in the personal drone space hate it when you use the word drone, because it invokes thoughts of remote military unmanned vehicles.

So perhaps this oversized quadcopter needs a new name. Wired calls it a "special kind of crazy." Gizmodo Australia calls it "the flying taxi of our dreams."

We call it a "bad helicopter."