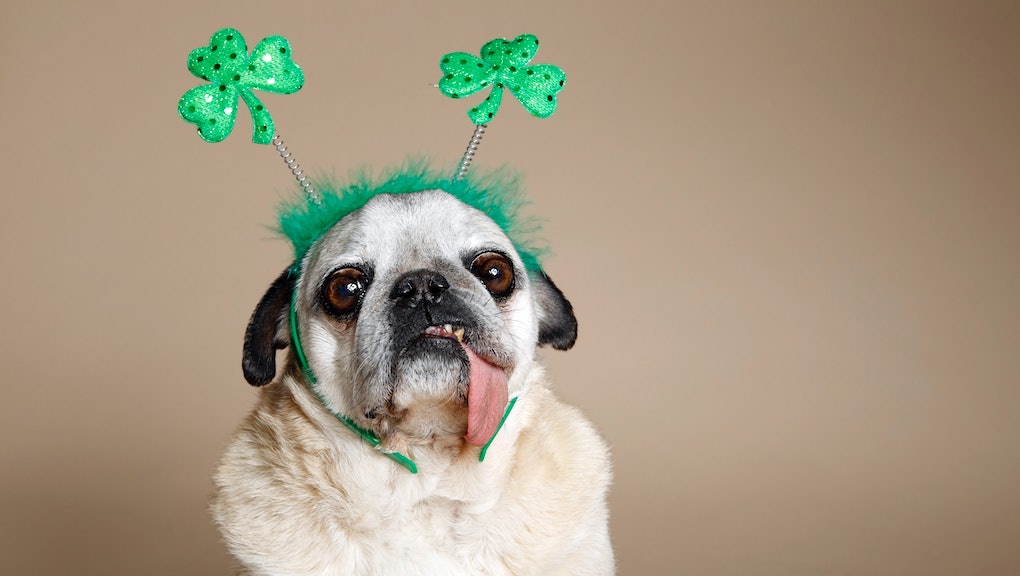 This St. Patrick's Day, Good Luck Not Having a Sloppy Drunken Hookup

St. Patrick's Day is a solemn cultural and religious celebration for the Irish people. It also happens to be one of the biggest drinking days of the year, which makes it a very festive holiday indeed! But with all that drinking comes an underlying risk: You might engage in an extremely regrettable, shit-faced hookup.

"I definitely won't be making that mistake again this year," you may be thinking to yourself. "I certainly will not get so drunk on green beer and Jameson shots that I leave the bar with a fuckboy in a furry green hat who shouts 'They're after me Lucky Charms!' in an Irish accent while we fondle each other's genitals in the backseat of his 2001 Nissan Maxima. Nope."

Your decision to not do that this year is truly admirable. It is also a sentiment that is probably shared by many other people with regrettable St. Paddy's Day hookup experiences under their belts.

Here are just a few of them:

1. This Delaware couple that got caught sloppily boning behind a dumpster on St. Patrick's Day in 2014.

3. This pair of drunken degenerates who were "performing sex in a window when the parade was going by" on St. Patrick's Day 2009 in Hoboken, New Jersey.

4. Anyone who lives in Hoboken, St. John's, Amsterdam, Las Vegas, Chicago, Montreal, Boston or New York City, all of which are known dens of St. Patrick's Day-themed sin (according to this charming listicle of the eight best St. Patrick's Day party cities).

6.  These Twitter users whose thirsty tweets about having St. Patrick's Day sex with One Direction member Niall Horan are oddly specific.

7. This predatory frat bro who defines St. Patrick's Day as a day to "bone some rando puss" and advises that men target women in zip-down sweatshirts, which he refers to as the official "uniform" of St. Patrick's Day.

8. Any drunk woman in a zip-down sweatshirt who is inexplicably charmed by the aforementioned frat bro.

9. This heathen who got so drunk one St. Patrick's Day that he claims he had sex with his own aunt. (By marriage, but still.)

But anyway! Good luck with not falling into that "regrettable drunken St. Patrick's Day hookup" trap this year. We have faith in you. You can do it! (Maybe try replacing all those Jameson shots with a Shamrock Shake or something.)