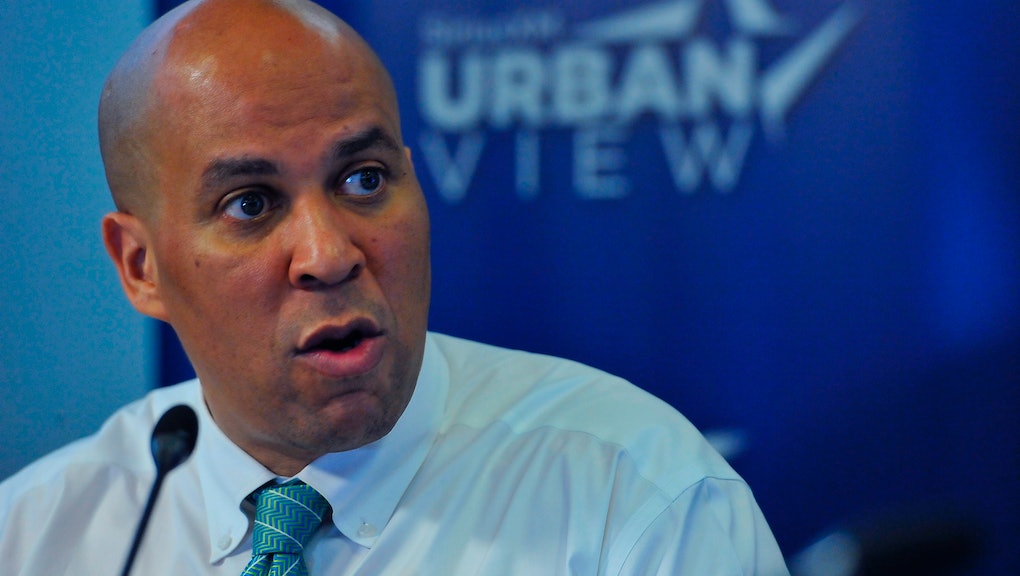 Cory Booker Wants to Make America Great — But Will His Vision Work?

WASHINGTON, DC — There's an image of Cory Booker that has emerged in recent years — the guy who runs into burning buildings to save his neighbors and drops everything to save a freezing dog — that has has turned Booker into a social media superhero, celebrity, meme and boy wonder, all at the same time.

To his supporters, the junior New Jersey senator, who was elected in 2013, represents the future of the Democratic party: an all-star politician who is quickly rising through the ranks and is a shoo-in for higher elected office in due time. To his detractors, Booker's celebrity status represents his Achilles' heel: proof that his larger-than-life reputation hides a weak record where actions don't always meet words.

Talk to Booker, however, who recently wrote his first book, United: Thoughts on Finding Common Ground and Advancing the Common Good, and he gives you the sense that far from a social media celebrity, he views himself as just a regular guy — one who is trying desperately to make a difference.

"I wanted to let people know I had fears and insecurities, that I had my heart broken and trashed, that I was an idiot and a jerk ... so people don't say, this is the caricature I might have heard about that saves people from burning buildings," Booker told Mic in an interview on a recent afternoon in Washington, D.C.

The senator sat down with Mic to discuss his new book, but the conversation quickly veered into a range of other topics, everything from his first impressions of Washington as a freshman in Congress, to his take on the 2016 election thus far.

Booker has kept a relatively low profile in his first several years in the Senate, but what emerged in our conversation was a striking portrait of a man who certainly doesn't regard himself as a typical politician.

United provides an intimate window into Booker's worldview, representing a raw, seemingly authentic and, at times, personal account of his rise through politics, starting in Newark as a city councilman and then mayor, and then onward to Washington, D.C. United's open and honest portrayal of Booker's humility and frequent moments of self-doubt stands in stark contrast to another book which has made the rounds in this election cycle: Donald Trump's Trump: The Art of the Deal.

Then again, just about everything about Booker's political style stands in stark contrast to Trump. At a time when Trump is dominating the airwaves by preying on voters' anger and cynicism, Booker exudes the exact opposite, characterized by positivity, hope and optimism.

"I'm a big believer that the attitude you choose often creates the destiny you experience," Booker told Mic. "We need people who understand that things are really bad, but decide to choose hope anyway."

Booker also remains steadfast that change at the national level is indeed possible, even though faith in government is at an all-time low and Trump has gained tremendous traction with his promise to upend our political system and "Make America Great Again."

"I understand where this rage and anger comes from, in the sense that things in Washington are intractable," Booker told Mic. "But those boxes are just constraints on imagination."

"My experience after having been a mayor and city councilman is that I have seen the best of us," he said. "I have seen what we are capable of. I've seen the ability of us — not me — when we all worked together to create some powerful transformations."

Of course, it's one thing to say that change is possible and another to actually accomplish it, and Booker's record in the Senate is still relatively green. Although Booker never addressed Trump by name, much of our conversation felt like a subtweet to Trump, a direct rebuke of the Republican frontrunner's vision for the future.

"I don't want to lose what makes America great," Booker told Mic. "There are people who want to divide us, to make us see in the enemy in the mirror ourselves, but these are the people who drive us apart."

Although Booker has backed Hillary Clinton publicly and is also rumored to be on her shortlist for vice president, he seems decidedly focused on the future. His political aspirations go far beyond this election.

"I know everyone is focused on this election, but my focus is on this critical understanding that if our country is going to make it, we are going to need to make a new commitment to each other," Booker told Mic.

Booker's approach to politics represents a breath of fresh air, but whether his vision wins out over Trump remains to be seen.

The following has been condensed and edited for clarity:

Mic: How do you keep your sense of optimism, in a climate in which faith in government is very low, and people are being bombarded with messages about why they should be angry, anxious, and why they shouldn't trust government?

Cory Booker: It doesn't take a big leap in focus to stop and think for a moment about our history and what we've overcome as a people — wretched realities, horrible darkness where people had a right to not be hopeful, things like slavery and women lacking equal citizenship rights. These were violent periods of repression in our history, and yet warriors of hope still overcame those things.

Here we are today, relatively privileged in profound ways. So how can we surrender to cynicism at a time like this, when we have technological tools that my parents couldn't even imagine or dream about.?

I'm a big believer that the attitude you choose often creates the destiny you experience. People who are very pessimistic about things are actually contributing to that reality, as opposed to people who don't try to whitewash or homogenize or ignore the problem. We need people who understand that things are really bad, but decide to choose hope anyway.

We are incredibly powerful people, and we often don't realize it. We have tremendous power to shape the reality around us. But cynicism cripples us. It's a toxic spiritual state. It's a refuge for cowards, a way of saying, "I'm not going to own up to the challenges that are before me."

Let's talk about this election. The primary narrative that has emerged is establishment vs. anti-establishment. You recently made the jump from local politics to the national stage. How different has it been to try to affect change here in Washington? What has been the biggest surprise since taking office on the national stage?

CB: I wanted to write [United] as a rejection of the great man theory of history, that you and I are sitting here because of Abraham Lincoln, Thomas Jefferson or Martin Luther King. Instead, it is usually ordinary people who do extraordinary things. So, one of the reasons I wanted to let people know I had fears and insecurities, that I had my heart broken and trashed, that I was an idiot and a jerk, is to put it all out there so people don't say, "This is the caricature I might have heard about that saves people from burning buildings."

We're all so much more alike than we realize — despite our party differences and racial differences. We're all struggling through this. My experience after having been a mayor and city councilman is that I have seen the best of us. I have seen what we are capable of. I've seen the ability of us — not me — when we all worked together to create some powerful transformations.

I reject a lot of the boxes. To be sure, I understand where this rage and anger comes from, in the sense that things in Washington are intractable. But those boxes are just constraints on imagination.

Interesting. So if you reject establishment vs. anti-establishment as the lens, what is the primary dynamic you think we're witnessing in this election?

CB: I'm not going to let myself get dragged into a bifurcated view of society that's so convenient. To me, the whole concept of "Republican" vs. "Democrat" just doesn't work well. These boxes stop us from analyzing and understanding issues based on substance.

Instead, I want to be swayed by data. I want to see the numbers. I'm very sympathetic to the anger that people currently feel, which is based on bad policy decisions that we've made.

For example, you see smart countries really investing to get as many young people into STEM subjects from early childhood through college — countries like Germany and Japan. Our competitors get it. But meanwhile, what are we doing in America? We're not making investments in early childhood education, despite what the data shows.

You also see other countries lowering the cost of college — countries like Germany and Canada — while in the United States, it costs 52% of median income to go to college.

I understand where all the negative energy is coming from. My question is, ultimately, how do you direct that anger toward making change?

I don't want to lose what makes America great. I don't want to undermine what's great about America. I'm hoping other voices emerge during this time. I'm calling this a Paul Revere moment. We need other people out there, people saying the enemy is not without, it's within — people recognizing that the danger is when anger becomes so toxic, it starts to turn toward demagoguery.

We've seen this enemy within us before — from the McCarthy era to the Jim Crow era. There are people who want to divide us, to make us see in the enemy in the mirror ourselves, but these are the people who drive us apart.

For me, our differences matter, but our country matters more. We need forces that are going to bring us together, to get us back to a radical common sense.

If you believe, and I think most Americans do, that we need to get all our players on the field, no matter if you're gay, Muslim, Latino, black, transsexual or ...

Well clearly, aren't we're seeing in this election that there is a big percentage of Americans who don't believe that?

CB: When demagoguery gets to the point where you fear each other — let's go back a generation, for example, to the era when you were singled out because you were Catholic — then you are going to lose out.

I want to get everyone on the field. Then, once everyone is on the field, I want us to make our team as competitive as possible in this global world.

That, to me, is radical common sense. Let's have a pro-growth strategy for our country that's fiercely about equality. Let's push everyone to look at the data, which shows that blacks and whites don't violate drug laws any differently, but blacks will be arrested almost four times more.

That's just data. Once we can agree on the numbers, then we can ask, are these our values as a country?

I know everyone is focused on this election, but my focus is on this critical understanding that if our country is going to make it, we are going to need to make a new commitment to each other. The good news is the advantage we have, as Gen X and millennials, is that we have new technology that should make it so much easier to accomplish this.