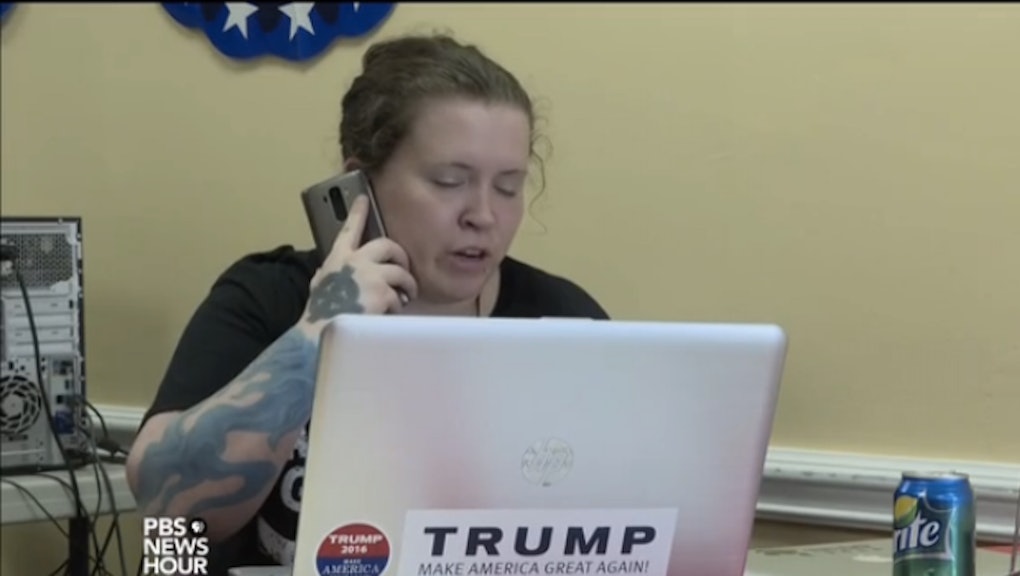 Donald Trump is luring the country's racist contingent out of the woodwork, and a recent profile of the Trump-touting Tilly family during a PBS NewsHour segment makes this frighteningly clear.

As Gawker reported Wednesday, the clan is uniformly energized by the Republican frontrunner, which — considering the fact that they've said they've always stayed out of politics — may be surprising. Until you see their white supremacist tattoos, that is. Perhaps then it starts making sense.

Read more: Super Tuesday's Most Bizarre Moment of  Is This Exchange About the KKK on CNN

The one she sports — Odin's Cross — is the most popular one amongst white supremacists, says Gawker. According to the Anti-Defamation League, it's "used by neo-Nazis, racist skinheads, Ku Klux Klan, members and virtually every other type of white supremacist."

On her other hand, Grace Tilly sports a large 88 symbol, which, explains the Southern Poverty Law Center, "means 'Heil Hitler,' as H is the eighth letter of the alphabet," and is another favorite among white supremacists.

But are the Tillys racist? Is that why they've gravitated toward Trump? No, explains Grace's father-in-law, Pete Tilly.

"All these protesters and all this stuff, and people saying [Trump's] racist, and then the Black Lives Matter, you know what? Red lives matter," he said. "Because when you bleed, we all bleed red."

Now, given the violence that's come to be synonymous with "Donald Trump rally," and given the mounting comparisons between Trump and Adolf Hitler, it is perhaps unsurprising that the Tillys are championing the GOP frontrunner — they aren't the only neo-Nazi sympathizers within his fanbase. And whatever their stated reason, it seems they wear their true feelings on their tattoo sleeves.