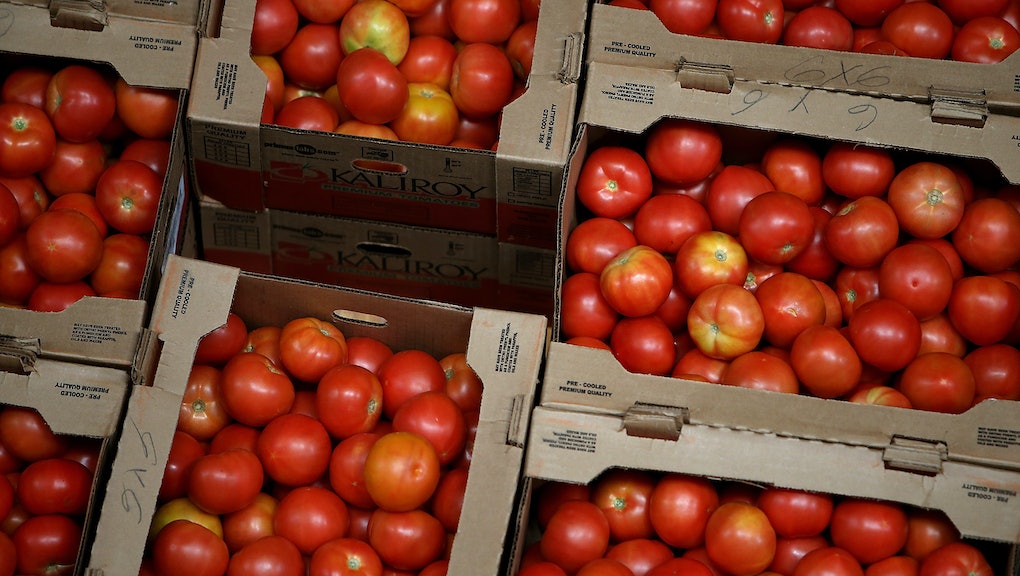 Unusable Tomatoes Are Being Turned Into Electricity, Thanks to Science

Hecklers' favorite fruit may have a new use. A team of researchers have found a way to render unwanted tomatoes into biofuel. They presented their findings at the National Meeting & Exposition of the American Chemical Society in San Diego on Wednesday.

"We have found that spoiled and damaged tomatoes left over from harvest can be a particularly powerful source of energy when used in a biological or microbial electrochemical cell," researcher Namita Shrestha said in a statement.

The group built a microbial electrochemical cell that can pull an electrical current out of tomato waste using an oxidation process. However, the method yields a relatively small amount of energy. According to the research, 10 milligrams of tomato remnants returns 0.3 watts of electricity. Researchers say that the state of Florida produces roughly 400,000 pounds of damaged tomatoes; broken down, those tomatoes could power Disney World for 90 days with an "optimized biological fuel cell."

The project grew out of one researcher's desire to develop a way to fix Florida's waste treatment issues. An undergraduate student at Florida Gulf Coast University, Alex Fogg hoped to put to use some of the methane-producing garbage in landfills. According to the Environmental Protection Agency, methane gas is one of the leading gases linked to global warming.

Fogg approached professor Venkataramana Gadhamshetty with his idea. "We wanted to find a way to treat this waste that, when dumped in landfills, can produce methane — a powerful greenhouse gas — and when dumped in water bodies, can create major water treatment problems," Gadhamshetty said in the release. Florida has a goal to recycle 75% of its waste by 2020.

Now the researchers are tasked with refining the cell so that electrons can be transferred more efficiently, by modifying the parts of the cell that are inhibiting electricity flow.