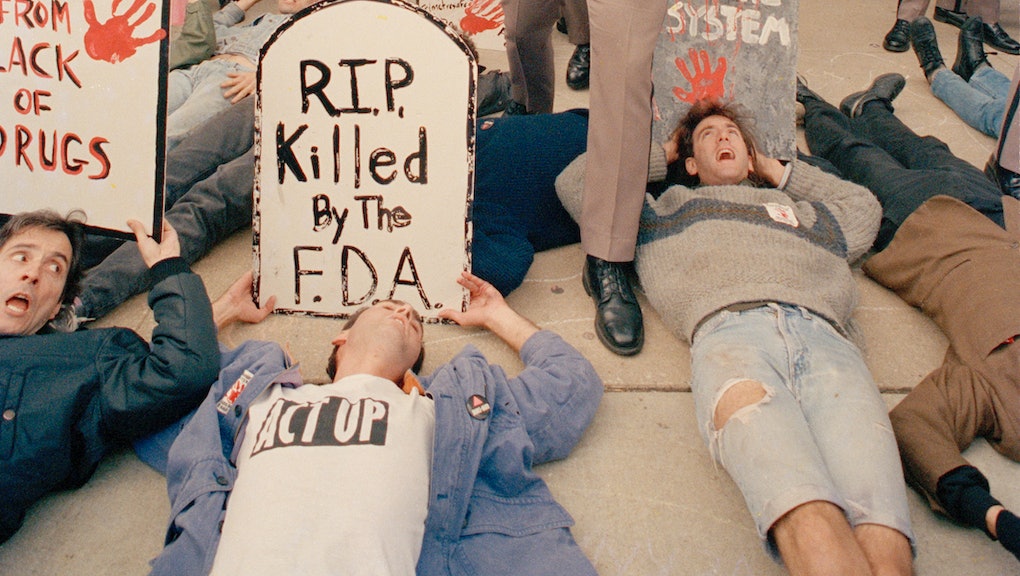 For people who grew up in an America where it felt like HIV/AIDS had always existed, it can be hard to imagine just how quickly the at-first-unknown virus arrived and spread in the United States — shifting from a mystery to an epidemic to an effectively manageable, albeit still serious, disease.

Read more: Ronald and Nancy Reagan Ignored the AIDS Crisis and You Know It, Hillary Clinton

While new diagnoses of HIV fell by 19% between 2005 and 2014, according to the Centers for Disease Control and Prevention, HIV diagnoses rose among some populations, proving that's it's still as important as ever to understand not only basic facts about HIV, but also the virus' complicated history in the United States. Here are some of the most important dates:

1981: In June, the CDC published a report noting several cases of Pneumocystis carinii pneumonia, a "rare lung infection," in five young gay men in Los Angeles, according to a timeline published by AIDS.gov. This is, according to the AIDS.gov timeline, the "first official reporting of what will become known as the AIDS epidemic."

1982: In January, the country's first AIDS clinic opens in San Francisco. Gay Men's Health Crisis is founded in New York City. In September, the CDC begins to refer to the disease as AIDS. During a White House press briefing, President Ronald Reagan's press secretary laughs off a question about AIDS. In December, an infant is diagnosed with AIDS after receiving a blood transfusion.

1983: Congress passes a bill that includes $12 million in funding for AIDS research. At a conference in Denver, people living with AIDS ask not to be called "AIDS victims," according to the AIDS.gov timeline. In December, "congressional subcommittee" releases a report saying the government has failed to "invest sufficient funding in AIDS surveillance and research."

1984: The national organization AIDS Action is formed with the goal of influencing AIDS policy and educating the federal government. San Francisco shuts down bathhouses.

1985: The first blood test for HIV is approved by the Food and Drug Administration, according to AIDS.gov. In Indiana, Ryan White, a teenager who contracted AIDS through a blood transfusion, isn't allowed to attend school. He becomes an advocate against AIDS discrimination. In October, movie star Rock Hudson dies of AIDS-related causes.

1986: According to AIDS.gov, the National Academy of Sciences issues a report criticizing the government's response to what is a "national health crisis." According to the organization Avert, in 1986, "the International Committee on the Taxonomy of Viruses said that the virus that causes AIDS will officially be called HIV (human immunodeficiency virus)."

AZT becomes the first drug approved to fight HIV. It costs $10,000 a year, according to GMHC.

1987: The AIDS activist group AIDS Coalition to Unleash Power, known as Act Up, is formed. Famous pianist Liberace dies of AIDS-related causes. Congresses passes the Helms Amendment, banning federal funding for education materials about AIDS that ''promote, encourage or condone homosexual activities.'' In a speech in May, Reagan refers to AIDS in public for the first time.

1988: Act Up holds a protest outside of FDA headquarters to call attention to the slow process for approving new drugs to treat AIDS. According to AIDS.gov, "Eight days later, [the] FDA announces new regulations to speed up drug approvals."

1990: Act Up holds protests at the National Institute of Health demanding more inclusion of women and people of color in clinical trials. The Americans With Disabilities Act passes, including protection against discrimination for people with AIDS.

1992: HIV/AIDS is now the leading cause of death for U.S. men between the ages of 25 and 44, according to the CDC. In New York City, AIDS activists carry the coffin of Act Up member Mark Lowe Fischer through the streets as an act of protest.

1993: Philadelphia, a film starring a Tom Hanks as a gay man with AIDS, opens in theaters. It is based on a true story. Angels in America, a play about the AIDS epidemic written by Tony Kushner, wins a Tony Award and a Pulitzer Prize.

Congress votes to uphold a ban on immigrants with HIV. By the end of the year there are an estimated 2.5 million cases of AIDS worldwide, according to Avert.

1994: According to AIDS.gov, AIDS is now the leading cause of death in the United States for people between the ages of 25 and 44. The FDA approves the first oral test for HIV.

The AIDS Memorial Quilt is displayed in its entirety. It covers the whole National Mall in Washington, D.C., and includes panels from all 50 states.

1997: U.S. deaths attributed to AIDS drop by 47% compared to the year before "due largely to the use of HAART," according to AIDS.gov. President Clinton announces a national goal of finding a vaccine for HIV in the next ten years.

1998: According to GMHC, African-Americans now account for 49% of AIDS deaths in the United States.

1999: The World Health Organization declares AIDS as the fourth leading cause of death worldwide. Since the start of the epidemic, 14 million people globally have died of AIDS related causes.

2001: A study shows that drug resistance among people who are HIV positive is growing: 14% of people who are newly diagnosed with HIV already show signs of resistance to "at least one anti-viral drug," according to the GMHC. Twenty years have passed since the first case of AIDS was reported.

2003: The CDC reports 40,000 new HIV infections a year in the United States, according to AIDS.gov. 27,000 of those infections are transmitted by people who don't know they're infected. In his State of the Union address, President George W. Bush announces a $15 billion plan for global AIDS relief.

2006: The CDC recommends routine HIV tests for all adults, yearly tests for those "at high risk."

2009: In October, President Barack Obama announces that the ban on HIV-positive people entering the United States will be lifted.

2011: Thirty years have passed since the first cases of AIDS were reported. A new study shows antiretroviral drugs can reduce HIV transmission in healthy people.

2012: The FDA approves an at-home HIV test that gives instant results, according to AIDS.gov. A survey finds that many Americans still believe myths and misconceptions about HIV/AIDS — including the fear that HIV can be spread by a toilet seat or a drinking glass.

2013: The National Institute of Health announces that a child born HIV positive in Mississippi has been "functionally cured" of the virus after being treated with antiretrovirals. Obama signs an act that will allow people with HIV to receive organ donations from other people with HIV.

2014: The CDC announces that only 3 in 10 Americans with HIV had the virus "under control." The child in Mississippi who was believed to have been "cured" of HIV is found to have a detectable viral load.

2015: Men who have sex with men and people of color remain at higher risk for contracting HIV, the CDC reports, and "30% of new HIV infections were transmitted from people who did not know that they were infected with the virus," according to the CDC.

Actor Charlie Sheen announces he is HIV positive. The WHO recommends daily PrEP, preventative antiretroviral, for anyone at risk of contracting HIV. The FDA announces a change to the blood donation policy for men who have sex with men: Instead of being barred from donating altogether, men can now donate blood if they have not had sexual contact with another man in the past 12 months, a change that some criticize as "meaningless."