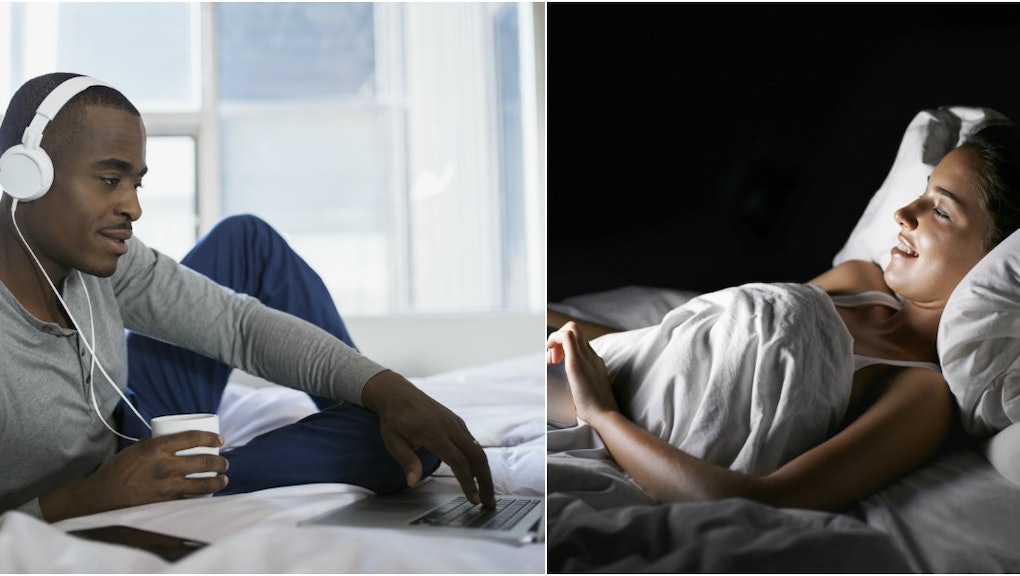 Back in January, Netflix's CEO Reed Hastings publicly condoned people sharing Netflix accounts, saying he considered it a "terrific marketing vehicle" for the website. What Hastings probably didn't realize, however, is the extent to which people are sharing their passwords: More than two-thirds of Netflix users have shared their usernames and passwords, according to a survey from GlobalWebIndex.

For couples in particular, the first joint Netflix account can constitute a relationship milestone.

"Once, where you would share a key to your home, you now share your password to your Netflix account," psychotherapist Barbara Neitlich, LCSW, told Mic. "Although at first glance it may not appear to be intimate, it is. Sharing your password to your Netflix account is like sharing a part of yourself: your likes, your dislikes, your recent viewing history. All of this allows your partner to get to know you better and feel closer to you."

Which begs the question: is that level of digital intimacy necessarily a good thing?

For many couples, sharing digital accounts isn't necessarily a marker of a relationship moving forward, so much as a matter of convenience. Britni*, 31, viewed sharing Netflix and Hulu with her now-husband as simply part of the process of moving in together. Since they'd started splitting bills, it was a natural next step: He already had Hulu, so she bought them Netflix, and now, they each pay for one and use both.

Yet when 33-year-old Amanda*'s husband gave her access to his HBO and Showtime accounts after two months of dating, she recognized it as a milestone in their relationship. It felt "like a step forward because I knew he really trusted me," she said. "Sharing his password indicates trust. All of his accounts had the same password, even his email."

For some, sharing an account — whether it's on Netflix, Instagram, or even on Venmo — can be viewed as something of an exploratory gesture, a way for couples to start exploring their boundaries. Dating coach Lori Salkin believes sharing accounts "can be a great way to test how much you trust one another and your feelings about the relationship," she told Mic.

But merging digital lives isn't always an easy decision — especially when it means putting your money in someone else's hands. When you give anyone access to an account with your payment details, psychotherapist and Harvard lecturer Holly Parker told Mic, "you're trusting the other person to pay the bill and to negotiate finances reasonably."

Karen, 35, learned this firsthand when she shared Netflix with an ex-partner five years ago. He overdrew her bank account by expanding her service, ordering extras and failing to return DVDs on time. After they broke up, he even changed her password so she couldn't log in to her own account.

It wasn't until she and her current husband lived together that she trusted him enough to share their Amazon Prime and Netflix subscriptions.

"Sharing accounts isn't something I do unless I feel the other person won't screw me over," she said. "If you can share an account with me and not be a dick, maybe it's OK to share other things."

As with any shared expense, the question of who covers memberships and orders can lead to tension. Pavan*, 27, said he shares his Grubhub and Eat24 subscriptions with his girlfriend — which means that when she orders food, he automatically foots the bill. "If a dinner goes above $50, I start feeling a bit weird. I might not get a dinner like that if I were on my own," he said.

Yet the question of whether they should put both of their billing information into the app has never come up. "I have more money, so I feel like it's only right that I use my resources to keep our relationship stable," he said. "But there is this question of who is putting more into this relationship."

29-year-old Jared, on the other hand, said buying textbooks and other items for his girlfriend through their combined Amazon Prime account actually works in his favor, since a large enough purchase gets him free two-day shipping. Since he trusts her to be considerate, he has never felt the need to cap her spending.

"There is this question of who is putting more into this relationship."

While most psychologists Mic spoke with did not caution against sharing social media accounts in general, there was one thing they recommended that couples keep separate, regardless of how long they've been together: email addresses. Apparently, this is farly common: according to a 2014 Pew Research study, 27% of couples share an email account, while only 11% share a social media account.

Katie, 30, was against joint email addresses — until she and her husband had kids. While they still retain individual emails, their joint address is incredibly convenient, as it receives information about their kids' schedules, announcements from their schools and family news, she said.

"Because I'm the primary contact point and he's the custodial parent, we needed to have joint knowledge of everything that rolled through," she told Mic.

Yet psychologist Dr. Nikki Martinez Psy.D., LCPC, said that sharing email addresses in particular crosses the line from intimacy to intrusiveness. "People should be able to email a good friend in privacy," said Martinez.

Email-sharing can especially become a problem when one partner pressures another into it. Demanding to share email and social media is a common tactic to control, isolate, and spy on partners.

"I've seen women in abusive relationships suddenly 'share' their accounts with their partners, which has seemed to me another version of power and control," said Nancy Slavin, who facilitated classes for domestic violence victims.

Most experts see no issue with merging digital lives but caution against crossing that bridge too quickly. "I would not recommend it for those who are unsure of the relationship's future, as untangling all these things may be a headache if you break up," said couples' therapist Marni Feuerman, LCSW, LMFT.

At its best, though, the decision to combine online accounts can bring couples closer and indicate commitment — and for many, it's just a matter of convenience. Sharing Netflix with her boyfriend of four years "was more of a 'gee, why hadn't we done this sooner' moment than a step forward in our relationship" Emily, 26, told Mic.