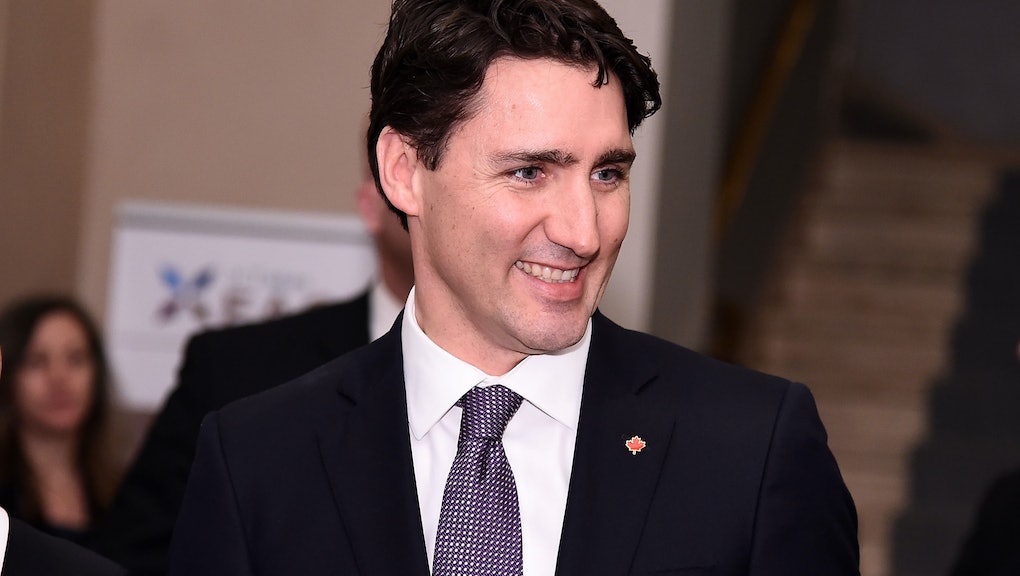 Justin Trudeau Was Proposed to by 2 American Guys: Will You Be Our President?

The United States was already smitten with Canadian Prime Minister Justin Trudeau when he recently visited the White House to speak with President Barack Obama about U.S.-Canada relations — or something like that. Most might have been too distracted by Trudeau's charm and good looks — as well as his record with feminism, LGBTQ rights and the refugee crisis — to notice.

While Americans of all genders may be dream of Trudeau as their future Mr. Right, two men had even loftier — and far, far less likely — hopes. On Thursday, during the prime minister's visit to New York City, they dropped to their knees in a local deli and popped the question: Will you be our next president?

"All those guys are so bad. They're so terrible. Please," begs the first, referring to the 2016 presidential candidates.

"They're either boring, weird — we have to settle for them," his friend chimes in. Ever the diplomat, Trudeau just laughs and shakes his head.

Seeing that their appeal to reason didn't convince the prime minister, the men resorted to more drastic measures: getting on their knees for some good old begging.

"I don't know if you noticed, but I actually have a job, and it's a pretty good one," Trudeau says. And, with a pat on the back, he dashes the men's hopes — and probably thousands of other Americans' hopes too.

There's some speculation that the two are known political pranksters, bearing a resemblance to the men who attended a Hillary Clinton event sporting "Settle for Hillary" T-shirts and those who wore Nazi-style armbands to a Donald Trump event. One man, the CBC noted, also looks suspiciously like the heckler who recently accused former candidate Marco Rubio of stealing his girlfriend.

Whatever their M.O., their message is clear: Anybody but Trump (or Cruz or Kasich or Sanders or Clinton). No, really — anyone.