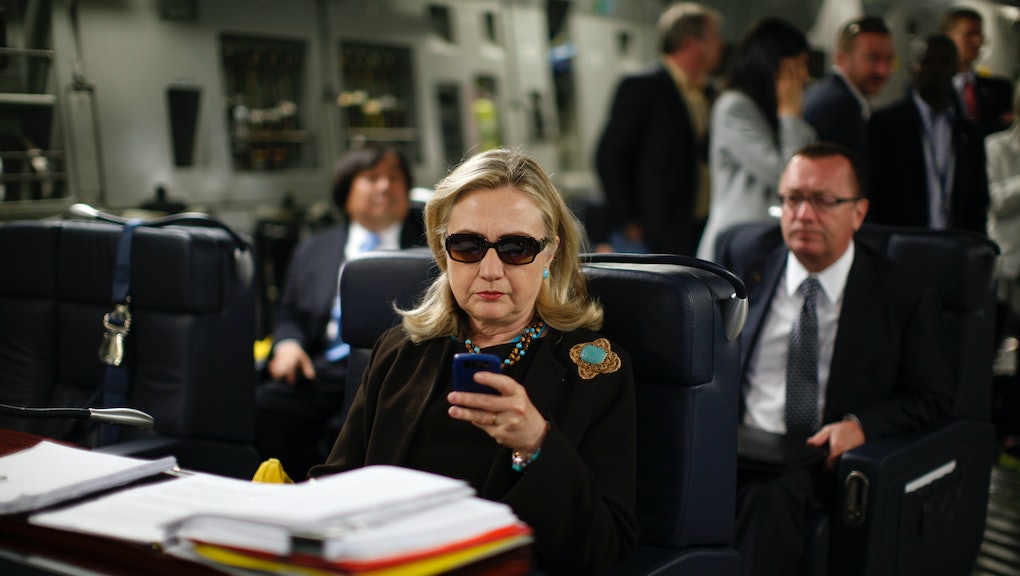 The NSA Wanted to Wean Hillary Clinton Off Her BlackBerry, as if That Was Going to Happen

One of the internet's favorite IDGAF photos of Hillary Clinton is the one pictured above: Clinton on a plane in 2011, staring at her BlackBerry. But according to newly obtained documents, she was so hooked on her BlackBerry at the time, it became an issue of national security.

Internal letters and documents obtained by Judicial Watch, a conservative PAC fixated on Clinton's emails, show a series of exchanges wherein a helpless group of security officials, National Security Agency operatives and State Department coordinators try to figure out how to get Clinton off of her BlackBerry, Ars Technica reported.

And Clinton was not about to use some PC to check her mail.

One suggestion security officials considered in the emails was giving Clinton a new, secure option developed for the NSA: a custom-made $4,750 phone that, as State Department security coordinator Donald Reid emailed at the time, was "not too user friendly, has no infrastructure at State and is very expensive."

And it ran Windows. So that wasn't going to fly.

Meanwhile, Barack Obama was seen everywhere with his BlackBerry, because the NSA provided him with a Blackberry 8830 World Edition with special modifications for enhanced cryptography, Ars Technica reported. But Reid got the impression that there was no way they were doing that for Clinton; they'd tried it with Condoleezza Rice, but an NSA liaison said that solution eventually became an "unmanageable" mess.

So what did they end up doing? Nothing, apparently. Clinton decided to continue on her merry way and use her favorite Blackberry anyway.

And we never heard about Hillary Clinton's email inbox again.