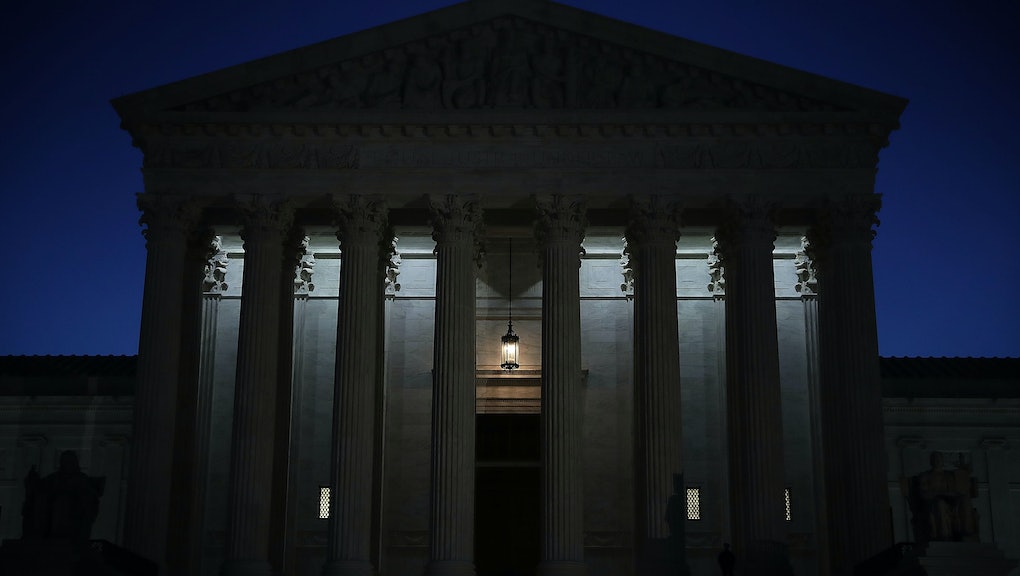 What Happens If There's a Recount With Only Eight Justices on the Supreme Court?

With the ideological future of the Supreme Court hanging in the balance after the sudden death of Justice Antonin Scalia in February, many committed partisans hope that the 2016 election hinges on the high court.

Sixteen years after the court halted the Florida recount and paved the path for George W. Bush to be sworn in as president in the hotly disputed Bush v. Gore decision, another potential nail-biter of a presidential election looms.

But unless the Senate Republican leadership performs a wholly unforeseen turnabout and allows a confirmation vote on Judge Merrick Garland, President Barack Obama's nominee to replace Scalia, the Supreme Court will be divided between four Republican appointees and four Democratic ones — raising the prospect of a high-court stalemate.

So what would happen? Say the Election Day count finds Donald Trump a few hundred votes ahead of Hillary Clinton in Ohio, without which neither campaign will have the 270 electoral votes needed to win the presidency.

The razor-thin results trigger a recount, which once again finds Trump in the lead. Clinton's campaign challenges the results of the recount, and the case ends up before the state Supreme Court, as it did in Florida in 2000.

Here's where things get tricky for Clinton. Ohioans elect their Supreme Court justices in nominally nonpartisan elections, but six of the court's seven justices are Republicans.

Let's say the court rules 6-1 that the recount should be halted, effectively ruling that Trump should win Ohio's 18 electoral votes — and the presidency.

If the Supreme Court deadlocks in a case, the lower court's ruling is affirmed. In this case, Clinton's challenge would fail and the path would be cleared for Trump to take the oath of office on January 20, 2017.

Say Clinton challenges the results on grounds pertaining to federal law — like a violation of civil rights statutes. In that case, Lempert said, the case would come up through federal district court and then the federal circuit court system.

Ohio falls under the jurisdiction of the federal Court of Appeals for the Sixth Circuit, whose 15 members include 10 judges appointed by Republican presidents and three appointed by Democratic ones.

Unless two Republican-appointed judges broke from their GOP-appointed brethren, the circuit court decision would, like a hypothetical state Supreme Court decision, likely be favorable to Trump.

You could then end up with the same result: A 4-4 U.S. Supreme Court letting stand a ruling that paves the path for Trump.

"But even in this case, some justices might be so concerned with legitimacy considerations that they would find a way to come up with a majority one way or the other," Lempert told Mic.

There's precedent for such action. In providing the decisive vote upholding the Affordable Care Act's individual mandate, Chief Justice John Roberts broke from his fellow conservatives on the court — but, many analysts argued, helped prevent the court's image from being tainted by accusations of hyperpartisanship.

It remains decidedly unlikely that the Roberts court will have to settle the 2016 election — but that far-from-unprecedented scenario is a reminder of the real consequences of not installing a ninth justice.