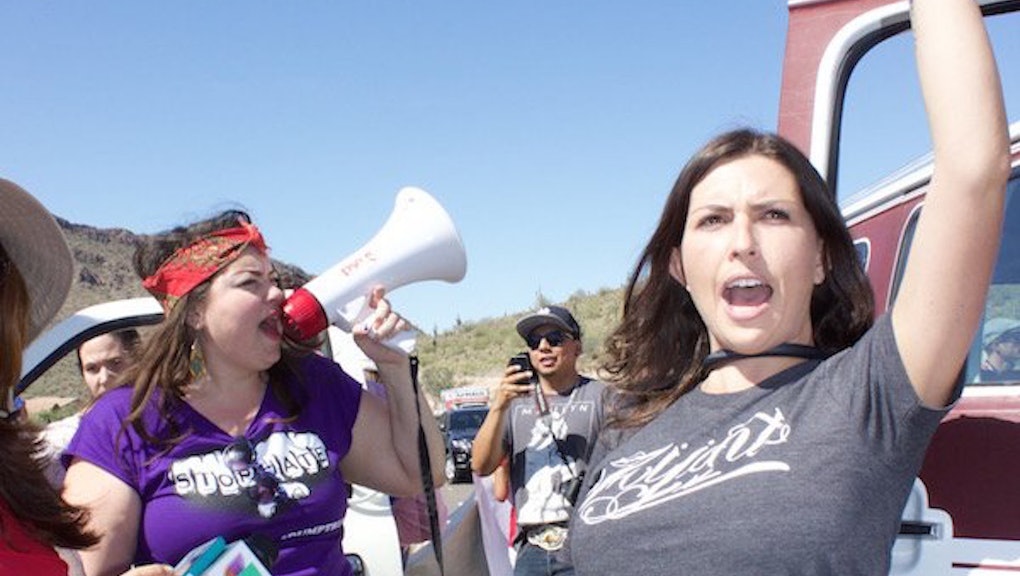 Protesters from the Puente Human Rights Movement clogged up Shea Boulevard, a thoroughfare in Fountain Hills, Arizona, in a successful bid to block Republican presidential candidate Donald Trump supporters from attending a local rally on Saturday.

Three of the protestors — Michael Cassidy, Stephany Laughlin and Jacinta Gonzalez, all of whom are American citizens — were arrested after chaining themselves to cars. Of the three, only Gonzalez was handed to Immigration and Customs Enforcement. This was, she says, because of her last name.

A former Open Society Foundations organizer for the New Orleans Workers' Center for Racial Justice Congress of Day Laborers, Gonzalez recorded a video with a message to the world outside ICE headquarters after her release on Sunday morning.

"The two others were able to go home, but because of my last name I was questioned by ICE and transferred to their custody," Gonzalez said.

"We believe that [Trump] events have to be shut down, because the hate, the racism, the xenophobia, the Islamophobia, the homophobia that is spewed in those events is permeating America," she added.

Gonzales cites Arizona's SB 1070 bill as one such example, which enables law enforcement to inquire as to the legal status of anyone they detain or arrest, a sentiment backed by the American Civil Liberties Union.

"[Such laws] invite rampant racial profiling against Latinos, Asian-Americans and others presumed to be 'foreign' based on how they look or sound," the ACLU explains on its website.

"As I was trying to defend my rights inside, I saw the faces of two children in one of the holding cells," Gonzalez concludes in the video. "We're going to continue to fight, to say #Not1More, and #DumpTrump."