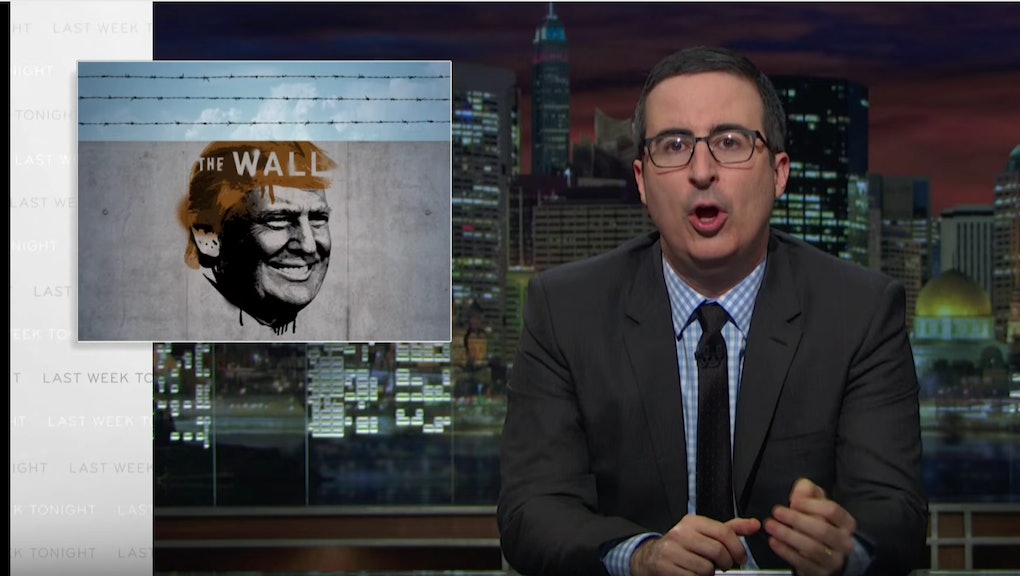 GOP frontrunner Donald Trump has been oft-criticized for one of his most well-known policies: building a border wall with Mexico, and asserting that they're going to pay for it. However, it's not just a bad idea with racist undertones, it's a horribly expensive one too, as John Oliver explained Sunday on Last Week Tonight With John Oliver.

Oliver noted that Trump has not been consistent with the cost of the wall — proposing as little as $4 billion to as much as $12 billion. However, according to Oliver, it would be north of $25 billion, without even accounting for the maintenance that would come with such a large project.

Read more: John Oliver Says Apple Is Right in Its Fight Against the FBI — And He'll Convince You, Too

"It's a big, dumb thing that only gets more expensive over time," Oliver said. "It's like getting a pet walrus: You think it's stupid now, wait until you learn what a bucket of sea cucumbers costs. You've not prepared for that."

Of course, Mexico has reiterated it doesn't plan to pay for the wall either, which is the only suggestion Trump has put forward. Moreover, with the way the border is traced currently, a hypothetical wall would be built inland on several stretches — something that has proved problematic for citizens on the border with former President George W. Bush's Secure Fence Act.

The idea that the wall would prevent drugs and criminals coming into the United States is also unfounded, as Oliver notes that there have been tunnels created between the two countries to distribute drugs, as well as people literally throwing drugs across the border. Plus, immigrants aren't even as dangerous as American citizens.

"In fact, researchers consistently find that immigrants are less — not more — crime-prone than their native-born counterparts," Oliver said. "The crime rates among immigrants once here are relatively tiny digits, which is something Donald Trump should frankly understand given that he has ten of them attached to his miniscule wrists."

Because of the hypocritical rhetoric, as well as the impracticability and costliness of the wall, Oliver suggests we take the money Trump has stated the wall would cost and instead spend it on a Palmer Waffle Iron — as it costs less per person than the proposed wall.

"Come on, America!" Oliver said. "Let's ask ourselves what kind of country do we want to wake up to? One that spends billions on an impossible, impractical symbol of fear, or one that smells like breakfast? Exactly!"

Check out the full segment below.