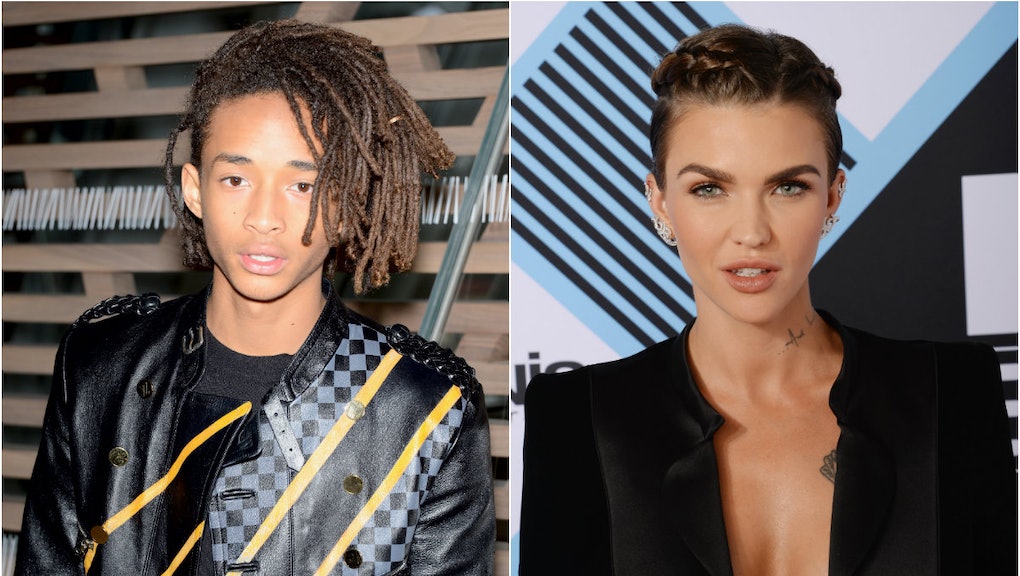 It's easy to assume that everyone famous knows one another, but obviously that's not true — just ask Mariah Carey, who still doesn't know who Jennifer Lopez is all of the years later.

But surely the two prime baes of gender-fluidity in fashion, Ruby Rose and Jaden Smith, are BFFs — or at least share some of the same ideals when it comes to gender-fluid fashion, as Rose has confirmed in a new interview. Speaking with Refinery29, Rose, 30, not only name-checked the 17-year-old Smith, but called him a role model.

Read more: Jaden Smith, Our Gender-Fluid Bae, Has No Time for Gendered Clothes

"If a boy wants to wear dresses and doesn't understand why he wants to do that, it's great to have role models like Jaden Smith doing that, being comfortable doing that and looking good doing it," she said.

"We have girls that want to dress like boys: What does that mean? They can feel confused and heartbroken, and on top of that, be bullied for what they're wearing."

That struggle is something Rose relates to from her own upbringing as a self-described gender-fluid tomboy. "I have days where I dress more femininely, and then there are days where I'll dress with a masculine vibe. It's what I've always done," she told Refinery29. What's changed? "Now I can understand why I'm doing it more."

Rose also called out what should be obvious to so many at this point: Androgyny in fashion is not necessarily congruent with sexuality.

"Dressing the way I dress, and the androgynous look, doesn't really have to do with sexuality — a lot of heterosexual women dress androgynously, and straight guys can dress femininely," she said.

Just look at Jaden Smith, who has never publicly addressed his sexuality, as an example that gender-fluidity in fashion is not exclusively an LGBTQ issue. "Those boundaries in fashion are slowly being broken down," Rose told Refinery29. "Regardless of who you are, it's about dressing for what you want to express."

Now, can we please get the proper Ruby Rose/Jaden Smith collaboration the world deserves?