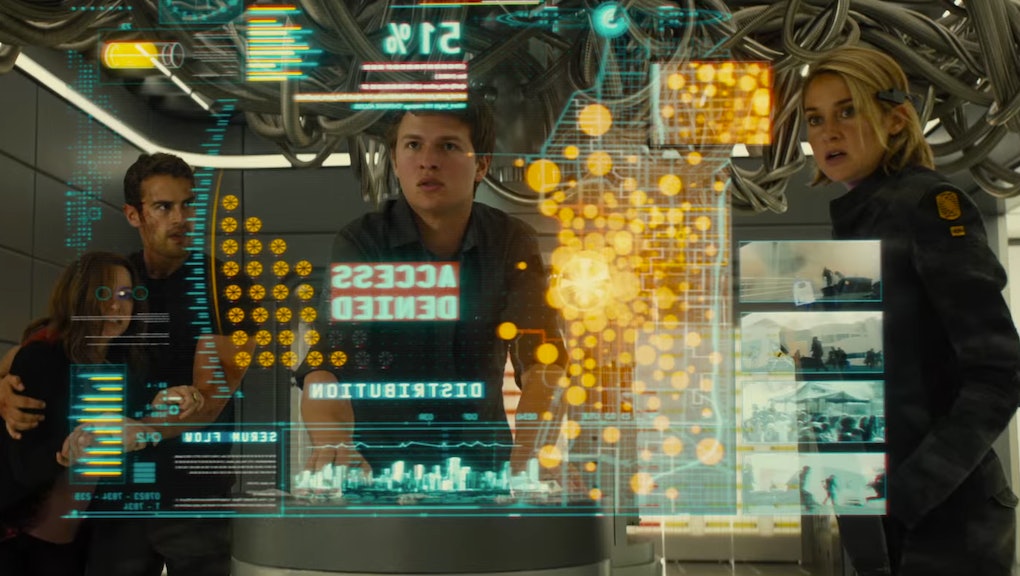 The Terrifying, Dystopian Future of 'Divergent' Is Already Here

The dystopian world of Divergent may not be as fictional as it seems.

As any devoted fan who queued up for Friday's premiere of The Divergent Series: Allegiant could surely tell you, the characters in Divergent use futuristic technology to master their deepest fears.

Members of Dauntless, one of the five factions into which residents of Veronica Roth's dystopian society are sorted, routinely put themselves through "fear landscapes" — simulations that force them to confront the things they fear most.

Overcoming fear is a mark of achievement in Dauntless. To gain entry into the faction, Tris Prior (Shailene Woodley) and her fellow Dauntless initiates are judged on how quickly they conquer their fear landscapes — not to mention how willingly they jump on and off moving trains.

There's even a dude in Dauntless called "Four" (Theo James) — so nicknamed because he has only four fears. What a champ!

It's more than sci-fi. The Divergent series may take place in a fictional dystopian future, but scientists are researching ways to eradicate fear here in the real world too.

A cure for fear? It may be possible, thanks to that magical hormone oxytocin. Oxytocin is known to help stimulate romantic connections, but it also could help rid the brain of fear and anxiety.

In a 2014 study published in Biological Psychiatry, researchers showed a series of images to 62 healthy men. When certain images were displayed, the researchers administered electrical shocks to the men's hands — a Pavlovian process that conditioned the men to instinctively fear those pictures, according to Quartz.

Next the researchers sprayed oxytocin up half of the subjects' noses, giving the other half a placebo spray. Then they subjected all of the men to traditional exposure therapy: repeatedly showing the men those same fear-inducing images, this time without the electric shocks, until they perceive them as less stressful, according to Scientific American.

Those who received oxytocin exhibited less activity in the amygdala, the part of the brain where fear is encoded.

"It would be far too early to give recommendations for a clinical use of oxytocin," researcher Monika Eckstein said, according to Scientific American. "However, there is a large body of research suggesting a potential therapeutic role in various disorders in the future."

Spraying a hormone up your nose to alter the way you perceive scary things? It's almost like injecting a serum into your neck in the hopes of tackling your greatest fears.

An army of fearless supersoldiers? That could happen too.

Future U.S. soldiers won't be turned into thoughtless minions against their will, but they could soon be able to turn off their sense of fear.

At a conference of biotechnology labs in June, the Pentagon's Defense Advanced Research Projects Agency put out an intriguing request: develop technology to control human fear and anxiety.

As Mic reported in June, DARPA was seeking bioelectric medicine or tools to communicate with and control the body's nervous system. Such technology would allow people to manually lower their blood pressure and control the way we respond to sources of fear and anxiety.

"That would be especially useful for our war fighters who have to deal with very stressful environments," DARPA program manager Doug Weber told Mic.

Imagine a team of soldiers being able to dial down their adrenaline levels before heading into a dangerous rescue mission. Soon, it could be a reality.

But our fear could also be helpful. For Dr. Arthur Caplan, a professor of bioethics at the New York University School of Medicine, the ability to temporarily shut off fear could be useful in certain specific war-related situations, such as planting a bomb. The danger, Caplan said, is in the concept of permanently eradicating fear from soldiers' minds — a "stupid and terrible idea," as he put it.

"Fear is an essential part of what it means to be a solder or a combatant," Caplan said. "You're not going to make smarter, prudent choices if you don't have fear. Being fearless isn't necessarily the best way to save your life or protect yourself."

Without fear, soldiers wouldn't worry about punishment or retribution.

"If you're fearless, you may also do things against the rules of war," Caplan said. You might "just shoot up civilians, or bomb randomly, because you don't care."

Another danger in developing technology to shut off fear? It could get into terrorists' hands, making it easier for them to seamlessly carry out suicide bombs and other types of attacks, according to Caplan.

The key, he said, isn't getting rid of fear entirely — it's teaching soldiers to cope with it.

Various branches of the military, for instance, use high-tech simulations to force troops to confront the most stressful situations imaginable, according to Reader's Digest. In the Navy, recruits are "subjected to the high-tech terror" of the U.S.S. Trayer — a 12-hour simulation replicating what might actually happen if a ship were under attack.

The simulations teach recruits how to "function amid the chaos and destruction of combat," according to Reader's Digest.

"Fear is a complex emotion," Caplan said. "It does us a lot of good."