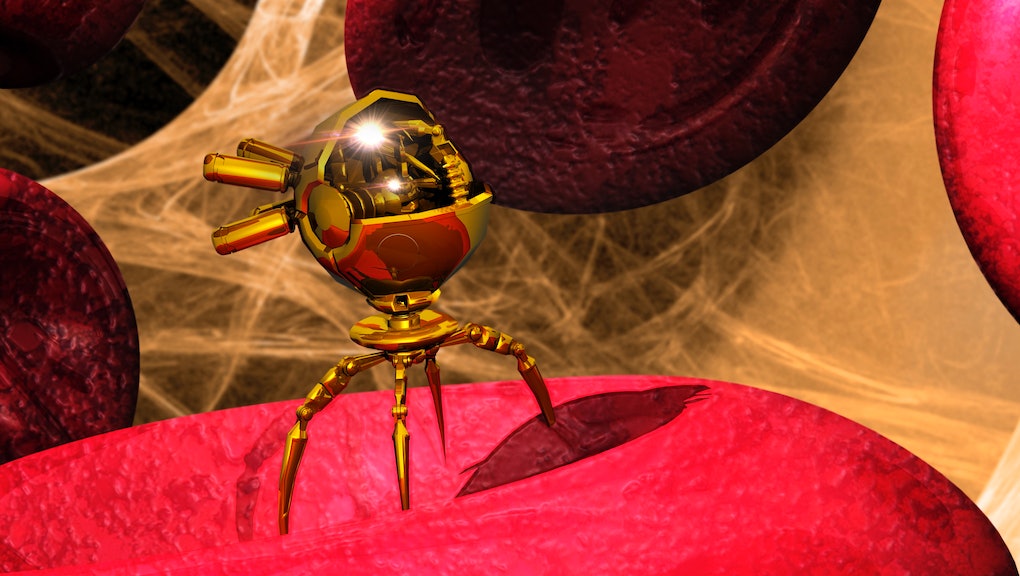 Researchers have tricked cancer cells into eating balls full of poison, killing the cells and effectively treating breast cancer in a bunch of mice, says a new report in the journal Nature, published March 14. These miracle balls are called nanoparticles, and they could be the key to finding, diagnosing and treating a number of illnesses in the future — once we figure out how to make them do their jobs.

Think of nanoparticles as little delivery trucks. They can be loaded with almost anything from a medical lab — medicine, fluorescent agents or, in this case, poison. But these delivery trucks are tiny.

Actually, tiny isn't the right word. The screws on your glasses are tiny. The pebbles that get stuck in your shoes are tiny. A grain of sand (the poster child of tiny) is still 5,000 times bigger than the largest nanoparticle.

"Nanomaterials help the delivery of a drug," Tom Webster, president of the U.S. Society for Biomaterials and Chair of the Chemical Engineering Department at Northeastern University's College of Engineering, explained in a phone interview. "If a pharmaceutical company has developed a drug to treat cancer, what we have done in the nanomaterial community is develop carriers for that drug so it can target a specific cell and release that drug to the cell."

At Webster Nanomedicine Lab, where Tom Webster runs the show, researchers are trying to use those materials to treat Ebola, E. coli and different noroviruses by sending nanoparticles into the body to seek out and kill bacteria without damaging your organs on the way in or out.

Because your immune system doesn't recognize nanomaterials as hostile invaders, the drug-loaded nanos can live in your body for a week delivering medicine — a much easier system than taking a pill every day. Right now, Webster says, there are already over 20 nanomaterials approved by the Food and Drug Administration to be used for medicine.

Medicine isn't the only thing nanomaterials carry. Webster's lab has orthopedic implants that use nanoparticles to mimic your bones, promoting bone growth without drugs while reducing infection. "Those are already in humans," Webster said. "They're showing faster bone growth so people can get back to running or tennis. It's much healthier than using a drug to promote bone growth."

Nanomedicines are already pushing forward, but they aren't yet great. Like the poison ball study showed, a 50% success rate isn't enough to say this was a definitive win — and that ratio is on the high end of the spectrum. There are two major tasks Webster and others in his field want to achieve, and need to achieve with a high rate of success: using nanomedicines to kill viruses, and turning them into sensors that can go inside your body.

"Think about medicine where it is," Webster said. "You don't go to a doctor unless it's an annual visit or something's wrong. By then it's usually too late, especially in the case of cancer, and you have to have significant intervention to reverse [problems] and sometimes that's not possible. I think that's why our health care costs increase, because medicine is still reactive."

Using nanoparticles to kill viruses, Webster said, might take only a couple years. Those viruses could even be attached to a fluorescent agent, meaning they would light up under a wand like the one security officers use to find metal in your clothes. That way, if a doctor is trying to find misbehaving cells in your body, all it has to do is light up the fluorescent nanoparticles attached to them.

To bring nanoparticles to the world, academia needs a sugar daddy: Though nanoparticle sensors could usher in a new era of medicine, Webster says it could be more than a decade before we can build them — mostly because of the materials involved. One challenge is powering the sensors, Webster said. "Our smallest batteries are orders of magnitude larger [than what we need]." And we still don't know how to communicate between sensor and computer, or to build biocompatible circuits that go inside the body.

To get all of those things, Webster says, would require a marriage between academia and industry, not to prove the science works but to make it easier to get FDA approval. Right now, Webster's lab works with companies that make medical devices, using what Webster knows to make the products better and to prove there would be useful applications for the science he's cooking up.

"Our academic work showed for many years that this is possible," Webster said. "We're good at coming up with crazy new ideas, but we need people who can turn these into real products. That's where industry comes in."

There's a long way to go for both the sensors and nanotech to kill viruses. But experiments like the one published in the journal Nature show very early signs of what we call with starry eyes the cyborgification of modern medicine. And if we can already use nanoparticles to grow bones and fight cancer, these little delivery trucks could be capable of a whole lot more.