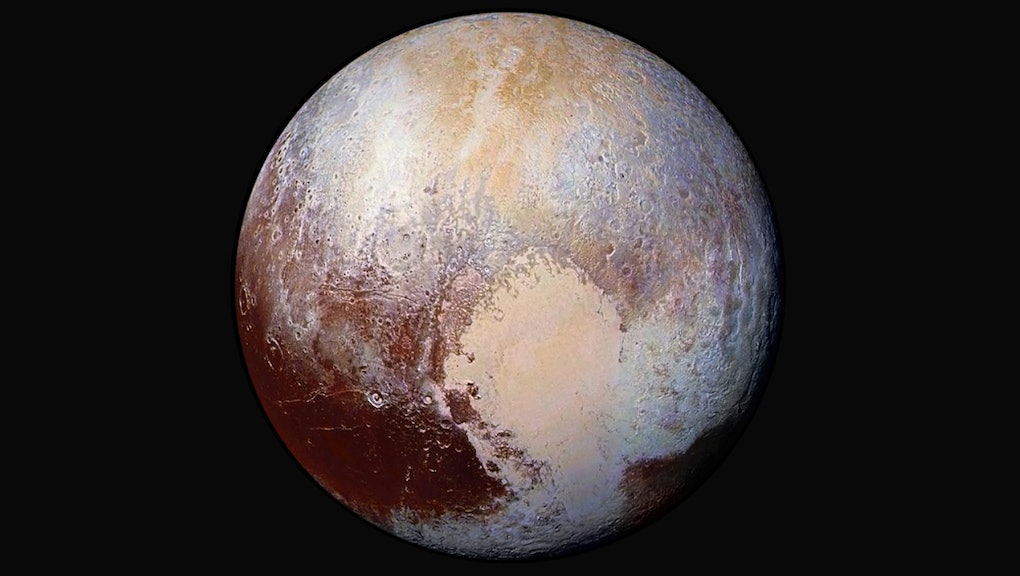 Molecular gastronomists: Perk up! Pluto may have once been teeming with lakes and rivers of liquid nitrogen.

New Scientist's Jacob Aron reports that though New Horizons is nearly 300 million kilometers past the dwarf planet, the probe is still sending back information on Pluto. Data from the New Horizons probe was used to determine how the climate and atmospheric pressure of Pluto had changed over time. Current models have indicated that there were periods in Pluto's history where the temperature and pressure were high enough to melt frozen liquid nitrogen.

Alan Stern, mission leader who spoke at the Lunar and Planetary Science Conference in The Woodlands, Texas, said Pluto's topographical features hint at its liquid past. "It's very smooth, as if a liquid has frozen across one height," Stern told New Scientist. "It's hard to come up with an alternate model that would explain that morphology."

A contributing factor is the peculiarity of Pluto's oblique rotation in space, resulting in regions that are simultaneously tropical and arctic. "800,000 years ago the dwarf planet would have experienced a climate extreme as its axis reached 103 degrees," Aron writes. "The tropics extended to near the poles, while the arctic reached down near the equator. This could explain the dark region seen around Pluto's equator — it is the only region that is always tropical, and never arctic, meaning ice doesn't build up there."

The New Horizons team is trying to develop models to detect liquid on Pluto today, however inadvertently, after the probe detected "oozing glaciers" in July. With that said, Aron writes that "Early indications suggest the crushing weight of ice could create the pressure conditions necessary for a liquid layer."

Read more: Scientists Just Revealed a Ton of New Pluto Data and It's Defying All Their Expectations