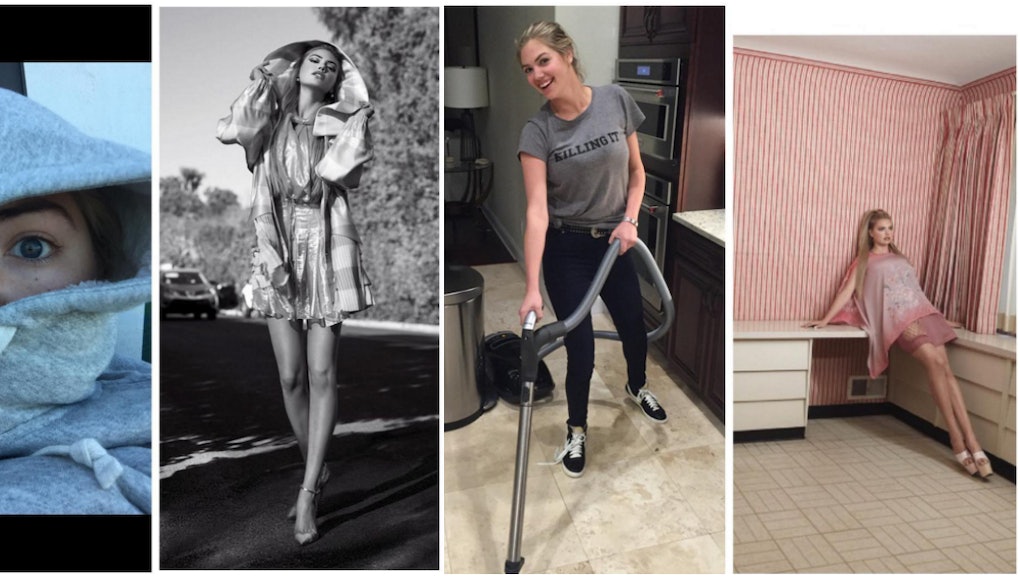 It usually takes eager internet whistleblowers to call bullshit on the glamorous fantasies peddled in fashion ads and magazines. But leave it to model Kate Upton, the ultimate fashion outsider-turned-insider, to do it herself.

Upton, who famously landed two Sports Illustrated Swimsuit Issue covers after Dougie'ing her way to internet fame, has decided to use her Instagram to call out the absurdity of her own fashion photos, with the tagline "reality vs. high fashion."

So far, the promising series is limited to three photos. The latest points out that, no, most women don't wear cocktail dresses while hanging out at home with their pets...

... and in fact, when we do lounge around at home, we're usually doing some mundane shit like vacuuming rather than staring off vacuously into space.

Oh, and that no woman looks that glamorous in a hoodie.

With her "reality vs. high fashion" captions, Upton proves she's endearingly well aware of distance between the glamorous clothing and lifestyles showcased by fashion and the reality lived by women — even models and celebrities.

And Upton should know, considering she's always been a little bit of the outsider — the high fashion model whose biggest claim to fame is a YouTube video, was told she was good enough for the Victoria's Secret catalog but not for its runways and has spoken candidly about the body pressures that women (herself included) face.

The 23-year-old may no longer be the new, in-demand name in modeling, but she's stuck around (and kept working) long enough to have a clear-eyed view of the fashion industry. We kinda love the fact that she's sharing it with her 3.1 million Instagram followers.