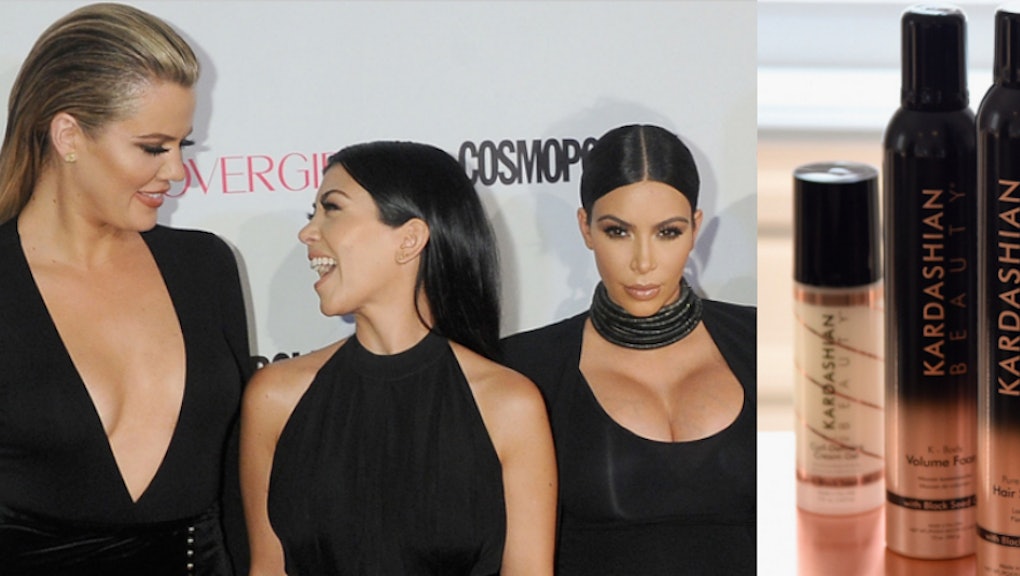 Kardashians Face Lawsuit Over Beauty Makeup Line for, of All Things, not Tweeting Enough

"The Kardashians don't tweet about their beauty routines enough!" said no one ever. However, Kourtney, Kim and Khloé Kardashian are in trouble for allegedly not tweeting enough promotion surrounding their Kardashian Beauty makeup line, and the lack of advertising to their millions of followers could cost them around $180 million, according to a recent lawsuit filed by Hillair Capital Management, TMZ reported.

Yes, you read that right: The Kardashians are in hot water for not posting enough about themselves on social media. Hillair — a company that stepped in and took over as the Kardashians' business partner for their makeup line after their former partner, Boldface cosmetics, struggled to stay afloat — is suing Kourtney, Kim and Khloé Kardashian for not consistently reminding their fans to buy their makeup line.

Hillair claimed the Kardashian ladies "almost immediately stopped marketing, promoting and supporting the line," and instead "began courting new potential investors to buy out Hillair's stake. In short: The Kardashians wanted a better, more lucrative deal than they had struck with Hillair," Entertainment Tonight reported Tuesday.

Of course, the Kardashian Kamp is crying foul. "This complaint is an obvious attempt to create leverage by hedge fund operators who took over the Kardashians' cosmetics brand," Kim Kardashian West's attorney Michael Kump told Entertainment Tonight in a statement. "The Kardashians have suffered enormous damages as a result of the many failures and breaches created by the operator's mismanagement of the company. The lawsuit is a disgrace. It is a jumble of false accusations, which will be exposed as lies."

Among that "jumble of false accusations" includes specific allegations of the Kardashian women failing to support their makeup line, including during a beauty launch in Dubai when, the court documents allege, Khloé Kardashian threw a tantrum while complaining she "hated everything about the Kardashian Beauty products," Entertainment Tonight reported.

Hillair is demanding the $10 million it claims it fronted to cover funding the fledgling makeup line, as well as the amount of $64 to $180 million in potential earnings it could have received had the Kardashian sisters tweeted more selfies of them using their own makeup (or at least pretending to).

Meanwhile, the Kardashians certainly find enough time in their days to tweet about their other business endeavors, from waist trainers to diet teas, and even other beauty product tips and secrets.