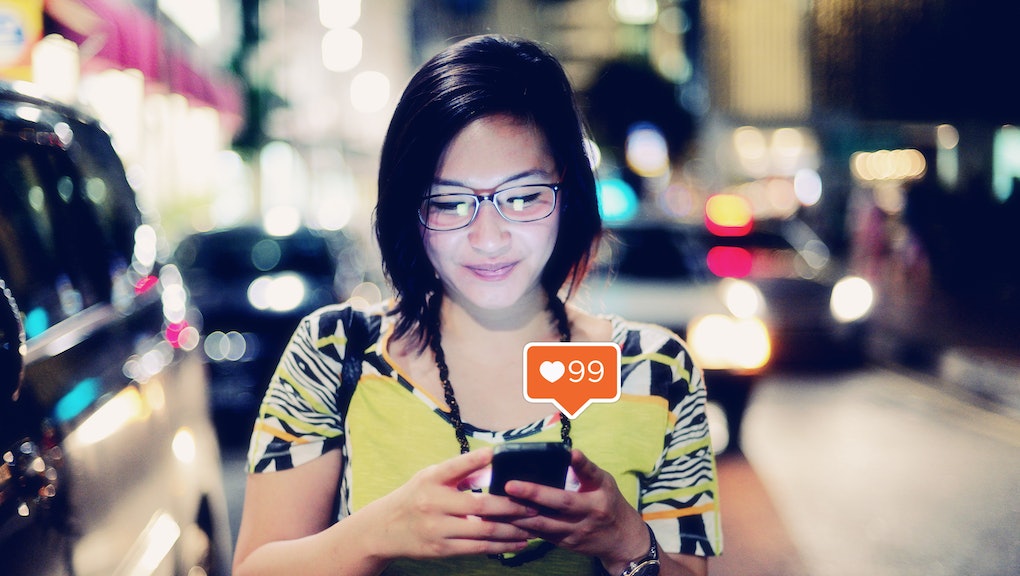 In One Chart, Here's the Ultimate Hierarchy of Likes We Get on Social Media

It's that five-hours-of-cunnilingus, orgasming-while-being-fed-pizza feeling we get when we pick up our phone and get a notification that someone liked our post on social media.

It's no joke, either. Researchers have found that those orange hearts and red rectangles can become strangely addicting, releasing dopamine in our brains — activating the same rewards-driven system that good head or a bowl of ice cream would.

Like Pavlov's dogs, we go hunting for the "zing." A 2013 study published in the journal Frontiers in Human Neuroscience found that the more active our brains are in response to social praise, the more time we're likely to spend on social media — which is most of us. We spend a shamefully needy 3.8 hours a day filtering photos, editing Facebook statuses and perfectly timing our social posts to cultivate the most RTs and likes.

Though the general consensus is that the more likes the better, some notifications just feel better than others. Anyone who has received an indiscriminate "You are so beautiful/handsome!" from Grandma the same afternoon your work crush RTs your joke knows that no two likes are created equal. There's a definitive hierarchy of likes.

Petty, shallow, immature? It's all those things, but as much as we hate to admit it, even into adulthood, we subconsciously weigh all the likes we receive on a daily basis. A Twitter fave from a grating coworker may go completely unnoticed, but an Instagram like from the last person you slept with could leave you in a blue-light-induced fog of euphoria.

How does your reliable Tinder bang stack up against your professional nemesis when it comes to the digital hit of meth that is a like? Behold: the hierarchy of people who like your shit on social media:

Getting likes from these people barely registers.

• Person you regret drunkenly making out with

• One-night stand who was overeager

• Your freshman RA who hit on underage girls

• The old friend you only see out of habit

The "Really, them? Cool" group

You weren't thinking about them, but now you are. This tier is full of likers who you probably haven't contacted in weeks or even years. Still, knowing they approve of you and your social media activity makes you feel a li'l warm and tingly inside.

• Musician/hustler/DJ acquaintance who invites you to the best shows

• The Craigslist person who you were maybe going to room with

• The cousin who is way too young to be on Facebook

• Old college roommate who gave up drinking and got religious

These likes aren't exactly game-changers, but they do make you feel moderately good about yourself when you peek at your phone.

• Your old coworker who you "neeeed to hang out with soon!" but never do

• Your borderline illiterate acquaintance who is an incredible hairdresser

• Friend's well-meaning boyfriend who you have nothing in common with

Getting a like from this person makes you walk a little taller the rest of the day. This group includes daily reliable likers, welcome blasts from the past and the extraneous attractive people in your feeds. Basically, likes from these people just make you feel a little bit cooler.

• Your best friend who would literally like anything you put up

• The beloved fifth grade teacher that you friended on Facebook

• The long-distance crush you may never see again IRL

• Your ex's parent who was kinda hot

• The geeky, yet somehow surprisingly difficult to impress, roommate of your good friend

• The fine-as-fuck coworker you Slack now and then

When you get this like, you make an audible noise and pass the phone to the person next to you to show it to them. This is the tier of people you're super excited to see like your posts, but they don't quite ascend to the high-fiving angels level. You care deeply about what this group thinks and you constantly like their shit, but you're probably not actually in love with any of them.

• The effortlessly cool, hot friend of a friend who you desperately want to actually befriend

• The friend you see once a month who has impeccable taste in movies, books and TV

• The person you're currently sleeping with

• Academically inclined friend you're fully aware is smarter than you

• Boss who scares the shit out of you, but whose approval you crave — basically the Ron Swanson to your Leslie Knope

The "High-fiving a million angels" group

This is essentially a smartphone-induced orgasm. This is the tier whose opinion is so important to you, a like from them could quite possibly merit a new status update, victory dance or change the pace of your entire day. Why? These people have major influence — not even on social media, but on you individually.

• Person you're currently crushing on