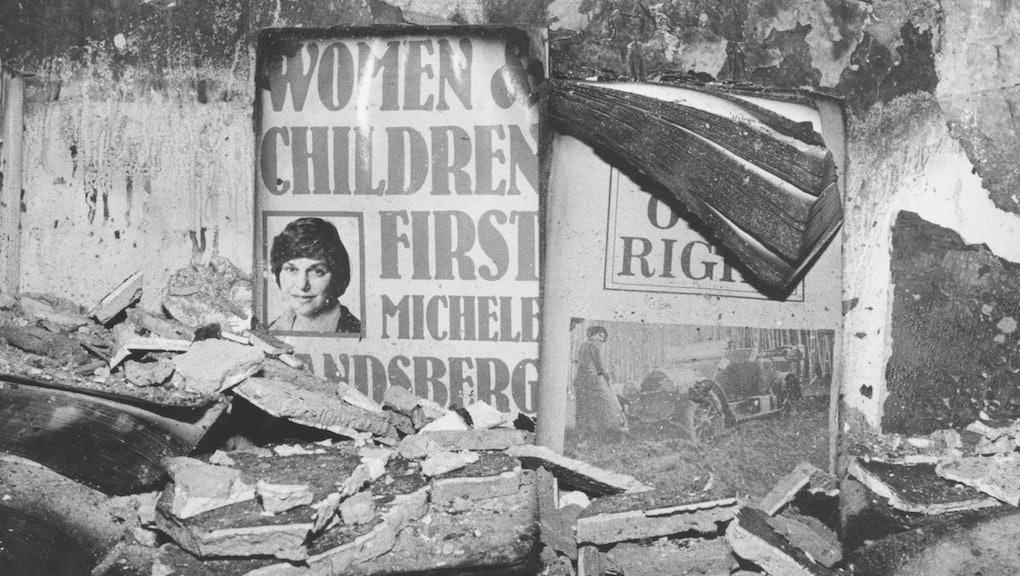 What happens if a Republican is elected president in November 2016? If one is a woman, the answer to that question is "nothing good." Each and every one of the contenders for the GOP nomination has declared himself anti-choice. And amid the increasingly aggressive push to criminalize abortion — to which women currently have a legal right, per Roe v. Wade — that's a dangerous thing.

Read more: This Horrifying New Study Shows What Will Happen If We Defund Planned Parenthood

Just how dangerous? Let's take a look at the particular perspectives of each of the Republican candidates on women's health — reproductive rights, family planning and accessibility of abortion services. Spoiler: If any of them were to win, women would be looking at a scarily barren healthcare landscape, in which having a uterus comes at an unwieldy price.

We'll start with what currently looks like the most likely scenario first: a Donald Trump presidency. The Republican frontrunner's chauvinism has been consistent, arguably the only consistent thing about him and/or his platform, but his position on reproductive health is a tricky one to pin down. In a 1999 interview with NBC's Meet the Press, for example, he said, "I am very pro-choice." He added that thinking about abortion made him "cringe," that he hated it, but that he still supported it as a right.

"Still, I just believe in choice," he said. "I am strongly for choice and yet I hate the concept of abortion." Asked if he would ban abortion, he firmly answered no. "I am pro-choice in every respect and as far as it goes." So: detests abortion, respects the right to it. Was a Democrat at the time.

Fast-forward to 2015, when Trump enters the presidential race as a Republican and finds himself amongst staunchly pro-life peers. When, in an August CNN interview, he was confronted with the fact that many women didn't believe that Trump would represent their interests, the candidate responded that he believed he'd "do great" with women because he "cherished" them. He said that he was "incensed" to see that Jeb[!] Bush would defund women's health and explained that he, by contrast, would be "the best thing to ever happen to women."

It's interesting, especially in light of his October statement to Fox News' Chris Wallace that "Planned Parenthood should absolutely be defunded" and the demonstrable good that organization does for women, abortion services aside. But it's a tack he's taken fairly consistently since, penning a factually questionable op-ed on his virulent pro-life views for the Washington Examiner in January 2016. His position seems now to be yes Planned Parenthood, but not while it provides abortions.

Most recently, he claimed that there should exist "some kind of punishment" for women who get abortions, then quickly back-peddled to explain that he meant the abortion providers, not the women themselves. Per usual, his actual personal position on the matter was lost to the contradiction.

So what does women's health care look like under Donald J. Trump? Difficult to say for sure. Many people don't believe that Trump buys his own rhetoric and dismiss his extreme statements as "show-business stuff."

Because it's better to be safe than sorry, though, we can assume that a woman's right to abortion could be challenged under Trump, and as a result, that many women's health clinics would see their funding sliced.

The Texan senator has never been unclear about his intentions when it comes to women's health services. He would largely defund them, because abortion. And because he apparently does not believe that anyone but men want, need or use contraception — he has labeled Democrats the "condom police" and has questioned women's need for birth control when condoms exist. This stance is perhaps unsurprising, coming from a man who believes birth control to be abortifacients.

Cruz opposes abortion, even in cases of rape and incest. Because his loathing of women's right to choose is so strong, he proudly supports Texas's House Bill 2, the omnibus bill that forces the closure of women's health care centers by imposing untenable operating obligations on abortion clinics. In the senate, he's made concerted efforts to cut funding for premiere family planning organization, Planned Parenthood, "throwing a tantrum" in September when they failed.

Cruz has packaged himself as the most pro-life, least pro-women's-health of all the GOP candidates currently running for the nation's highest office. He has been consistently anti-choice in his congressional record and would cut federal funding for women's health, guaranteed.

"Do we want to live in a country where extremists use violence to deny women legal health care, and people whose words may well spur them to action insist they have nothing to do with it?" Katha Pollitt wrote for the New York Times in early December, following the Planned Parenthood shooting in Colorado Springs.

The Ohio Gov. is arguably less scary than either of his two opponents, but still pretty damn scary. He supports abortion only in light of rape, incest and endangerment of the mother's life. Otherwise, he's four square against it — and it's for that reason that he recently signed a bill that defunded Planned Parenthood in his state, in so doing cut $1.3 million that was earmarked for "HIV testing, cancer screenings and programs that help prevent domestic violence and infant mortality," according to Huffington Post. You know, basic reproductive health services.

Because that's what John Kasich does, according to FiveThirtyEight:

"Since entering office in January 2011, John Kasich, Ohio's governor and now a GOP presidential hopeful, has signed every abortion and women's reproductive health provision that has landed on his desk. In four and a half years he has enacted 16 legislative proposals related to family planning funding and abortion access across the state."

If he's consistently moved to defund family planning services in Ohio, what's to stop him defunding them nationwide in the unlikely event that he attains the White House? Indeed, he's said that he would — he's also praised pregnant women who forego cancer treatment in the interests of their babies, which is entirely their right, but hints at a mindset that prioritizes the unborn over living, breathing women.

So: Not as hot a hell as that Ted Cruz would create, but certainly one in which women lack access to affordable health care and to abortion services. Not, in other words, a country in which women are free to exercise their human rights.

If only it were easier to simply pack up and move to Canada.