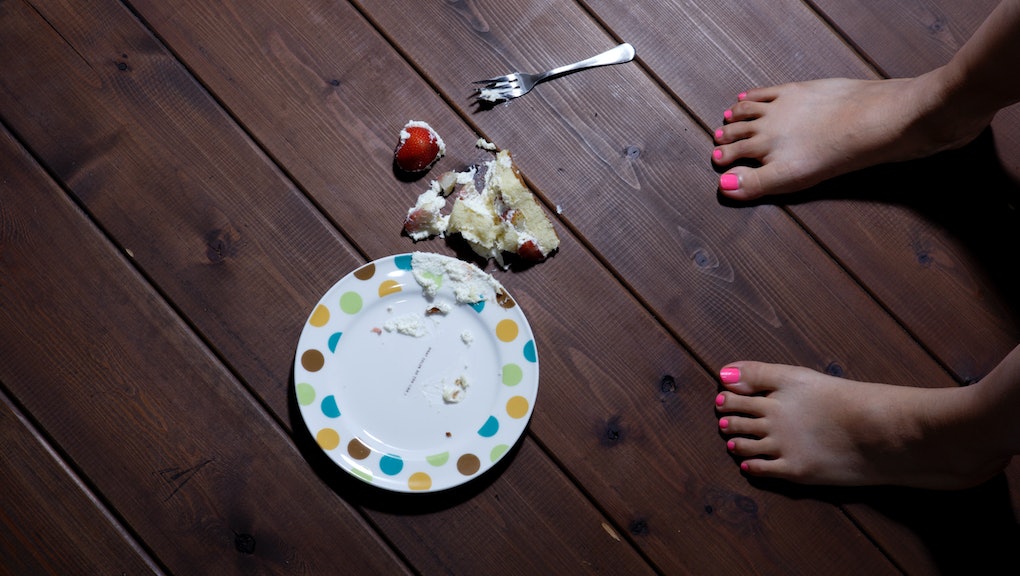 Does the 5-Second Rule When You Drop Food Really Work? Here's What Science Says

The five-second rule was probably invented the first time someone dropped a brownie or everything lox bagel on the ground. Then they thought, like most would, "well, I'm not not going to eat that just because it made contact with the ground for five seconds, better snag it quick and invent a scientific rule to justify it." While that person has saved us a lot of junk food mourning, science shows living life by the five-second rule puts us at risk for picking up a plethora of harmful bacteria including E. coli, salmonella and listeria.

Discovery channel's MythBusters experiment on the five-second rule discovered food's contact time with the floor has little to do with the bacteria it picks up — it depends more on the type of food. "Comparing the bacteria colonies picked up by dry saltines and wet pastrami after the sodium-rich snacks hung out on a contaminated floor for a few seconds, Jamie and Adam noticed the moist sausage scooped up far more flora," the experiment concluded.

Read more: Your Gross-Ass Contact Lenses Are Filling Your Eyes With Bacteria

According to MythBusters, food gets infected with bacteria the moment it hits the ground. "Even if something spends a mere millisecond on the floor, it attracts bacteria," MythBuster's five-second rule myth buster continued. "How dirty it gets depends on the food's moisture, surface geometry and floor condition - not time."

Then there's the heroic teenager that actually conducted a full-blown scientific study on the five-second rule that won an Ig Nobel prize (awarded to work that "makes you laugh then think"), according to WebMD. During an internship in the food and science nutrition department at the University of Illinois, then high school senior Jillian Clarke covered a tiled surface with E. coli and dropped gummy bears, cookies, and other treats we'd risk E. coli infection to eat.

Clarke's findings were somewhat in line with MythBusters. "We did see a transfer of germs before five seconds," Meredith Agle, then doctoral candidate who supervised Clarke's study, told WebMD. "We were dealing with a large number of cells."

But without controlling the mount of bacteria found on the floor, not much was found. "Jillian swabbed the floors around the University in the lab, hall, dormitory, and cafeteria to see how many organisms we could isolate," Agle told WebMD. "We examined the swabs, and there were very few microorganisms. That surprised me. I told her to do it again."

Same results. "I think the floors were so clean, from a microbiological point of view, because floors are dry, and most pathogens like salmonella, listeria or E. coli can't survive without moisture." Carpeted and moist surfaces weren't included in the study.

"At least, wash it first," American Dietetic Association spokesperson Ruth Frechman told WebMd. "Bacteria are all over the place, and 10 types, including E. coli, cause foodborne illnesses, such as fever, diarrhea and flu-like symptoms."

The real takeaway here is that if you're not willing to suffer the flu for a cookie, you're not worthy of that cookie.