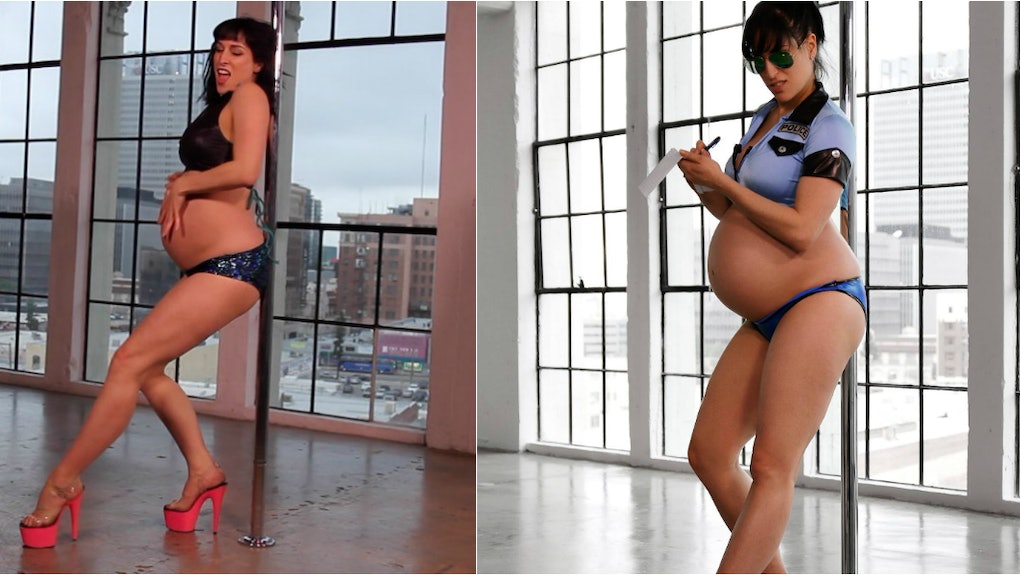 But what about strapping on a pair of eight-inch heels and engaging in the sensual act of pole dancing, all while dressed as a sassy policewoman? For 36-year-old expectant mother and professional pole dancer Jill MacLean a.k.a. Cleo the Hurricane, it's just another day with child.

MacLean recently opened up about her pole dancing and pregnancy journey with a post on her blog.

"As much as I have enjoyed this journey, preparing for motherhood, watching my baby belly grow... I have been craving and loving that feeling of putting on my heels, a sexy song and pole dancing," she wrote. "Just to feel sexy again."

Is she doing all the crazy acrobatic shit that usually does when pole dancing? Well, no.

"Definitely no tricks or inversions," she wrote.

Is she worried about jeopardizing the health of the baby by strutting around in such feisty footwear? Also no.

"I take my pregnancy very seriously and would never put on a pair of 7 or 8" heels if I wasn't completely comfortable and confident in them," she assured her fans. (Despite many concerned moms on the internet wondering otherwise, some experts consider it OK to wear high heels while pregnant — though it's worth noting that swelling of the feet is common during the third trimester.)

When it comes to prenatal exercise in general, which has been said to improve the health of both baby and mother, doctors typically recommend lighter activities such as walking or swimming, as opposed to shimmying down a metal pole in a spandex thong to Lil' Wayne.

But MacLean is not alone. In fact, pregnant pole dancers walk among us every day.

Long Island woman Sara Joel made headlines last year for doing acrobatics-y pole dancing routines, while pregnant. Famous woman Zoe Saldana pole danced at an airport once, while pregnant. This blogger has done it. This internet user hasn't but has wondered, "Should I?"

Pregnant pole dancing was even discussed in an episode of the popular daytime talk show The Doctors.

"Pregnancy used to be more of a hidden thing for women. And now women are showing their bodies, they're still feeling sexual — I mean, they're proud of their pregnant bodies," said co-host Lisa Masterson, a doctor who is a woman.

"I don't think that's good for her, or the baby, or us," said other co-host Andrew Ordon, a doctor who is a man.

Both were in agreement that doing intricate acrobatic routines or inversions while pregnant would be a very bad idea, largely because of the potential to fall and/or fuck up your spinal cord by twisting or turning the wrong way.

So what's the experience actually like for an unborn baby trapped inside the womb of a pole-dancing diva? We'll probably never know, since it seems reasonable to assume that such memories shall be long forgotten by the time any such baby is able to speak to its experience.

But here are three educated guesses as to what it's like:

1. Being on the inside of a snow globe while a young child gently shakes it.

2. Being strapped inside a porta-potty while it gets jerked around by a giant crane, like that one time on Jackass.

3. Being submerged in a bathtub of petroleum jelly during an earthquake.

As for Cleo the Hurricane, she is of the firm belief that her son is having the ride of his life while she pole dances. And she thinks he will be very impressed when he checks out the pics of his sexy momma (in two decades).

"This is how I express myself," she wrote in her post. "And I'm sure my son is gonna think his mum rocks when we bring out these pics on his 21st birthday!"