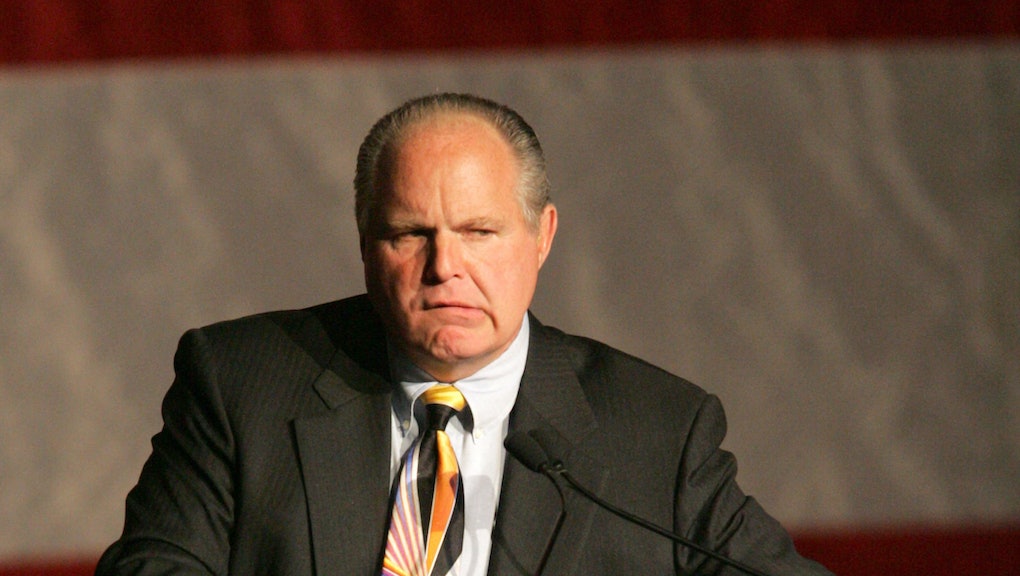 Rush Limbaugh Says First Lady Michelle Obama, Other Women Should Be Happy to Be Catcalled

Michelle Obama made a powerful speech about sexism and gender equality in Argentina Wednesday, in support of her Let Girls Learn initiative. On Thursday, right-wing windbag Rush Limbaugh took to his radio show to share his thoughts about what he called her "modern era of feminism," reacting to the first lady's address in a chauvinistic tirade that proved her exactly right.

Read more: Michelle Obama Penned a Stirring Column About the Need to Educate Girls Around the World

"As I got older, I found that men would whistle at me as I walked down the street, as if my body were their property, as if I were an object to be commented on instead of a full human being with thoughts and feelings of my own," FLOTUS said Wednesday. "I began to realize that the hopes I had for myself were in conflict with the messages I was receiving from people around me."

She explained that, whereas people posed questions of career to her brothers, she was only ever asked about the type of man she hoped to marry; that she and her female peers were continually passed over in the classroom, in favor of the male students.

"I decided not to listen to the voices of those who doubted or dismissed me," she said. "Instead, I decided to listen to my own voice."

That independence, that failure to appreciate the perpetual male gaze and/or her place, incensed Limbaugh, fueling a vitriolic rant in which he demonstrated that he'd completely missed the point.

Unable to comprehend how "a woman married to the most powerful man in the world" could possibly complain about her lot in life, Limbaugh labeled her smart, measured speech as an example of liberals once again trying to "push [their] corrupt leftist agenda." Calling her childish for "walking about with childish grievances," he denounced Obama and "these people" for presenting a less-than-pretty picture of American life to a foreign audience.

And then he mansplained the bejesus out of the sexist phenomenon that is street harassment.

Which is to say that women bring catcalling upon themselves by simple virtue of being female and having to travel, on occasion, from point A to point B. Many women, he alleged, would love to be whistled at while walking down the street. That Obama doesn't makes her ungrateful. The impertinence!

"I'm sorry, Mrs. Obama, but God made me a man," Limbaugh continued. "I can't help noticing a woman who I think's attractive. I'll be damned if I'm gonna shut up and not tell her so. But boy, if you do, you're insulting her brain as though she doesn't have one — so now no wonder men don't go to college. Who wants to be victimized by this kind of stuff?"

Limbaugh, a wealthy white male with an enormous megaphone through which to freely vent his many feels, is certainly the victim in this scenario; it must be so hard laboring under the weight of so much male privilege every day. Women, meanwhile, have it easy — just as long as they live within the lines men draw for them.

No. Simply noticing women is none of those things. Telling her doesn't have to be any of them, either. But shouting at her is another story — the repercussions of aggressive advances are real. The failure to return a man's interest or respond to a catcall can be dangerous, even fatal. That's what's so horrifying about men whistling at women as they walk down the street.