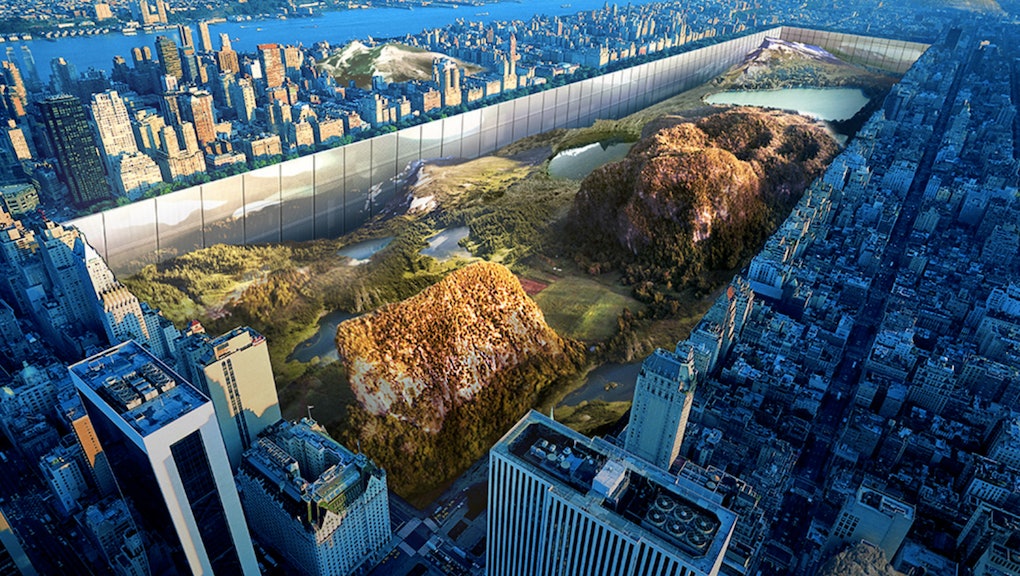 This "Submerged Central Park" Design Has the Internet Freaking Out

There is little more satisfying than musing over the fantastic designs the future will bring, so here's some fodder for your daydreams.

First-place winners of the 2016 eVolo skyscraper design competition have imagined a skyscraper complex that would run along the entire perimeter of the famed Central Park. The concept aims to bring the Manhattan park to more people.

The contest entry suggests digging 100 feet below the earth in order to erect a 1,000-foot tall structure. The building, a "hybrid multifunctional megastructure," would provide housing to many of New York City's occupants, thus drawing them closer to Central Park and making the park more accessible. The new edifice would also be made of highly reflective glass, giving park-goers the illusion that the landscape goes on forever.

The design doesn't just suggest wrapping Central Park with buildings. Rather, the proposal reimagines the park entirely. Gone is the zoo, the mall, Wollman Rink and all the various terraces, lakes and English-inspired gardens. Architects Yitan Sun and Jianshi Wu want the project to reveal New York's natural bedrock and use dirt taken from Central Park to create new landscapes around the city, potentially expanding the park system.

While the 7-square-mile project is lovely to gawk at, there are some questions to be had over whether such a formation would actually make the park more available to the general public. Being surrounded by buildings on all sides, it could become another park guarded by lock and key. But thankfully no such plan to uproot Central Park is underway.