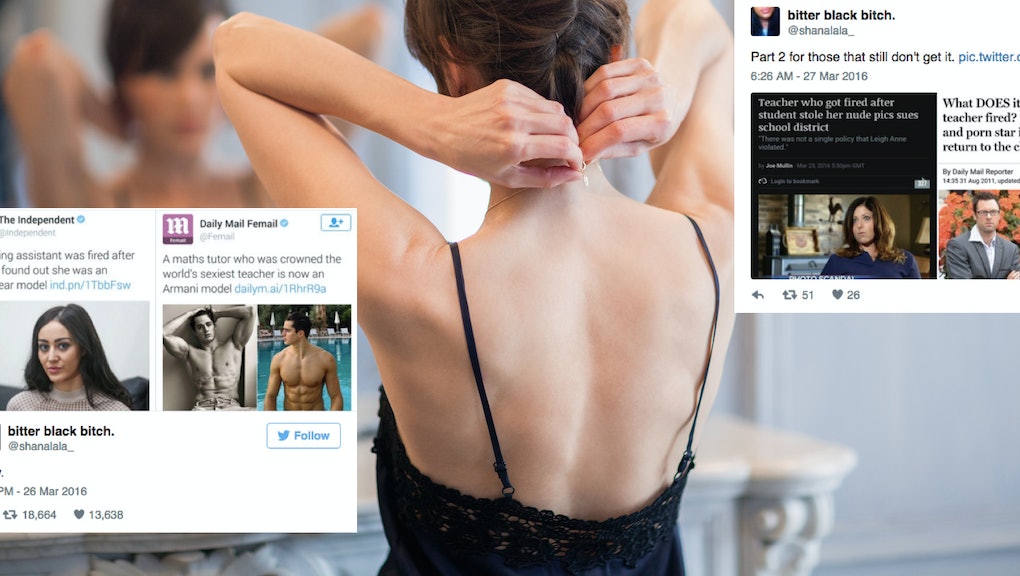 Can You Spot the Difference Between These Two Stories About Sexy Underwear Model Teachers?

That's just one of the headlines used to describe 21-year-old teaching assistant Gemma Laird, who reportedly lost her job after photos of her past underwear modeling surfaced online.

Sexy male teachers, on the other hand? They're more than welcome to stay in the classroom — a double standard beautifully summed up by a tweet by @shanalala_.

And if you didn't see the disturbing symmetry the first time:

The news stories might not all be identical, as some Twitter users have kindly pointed out; Laird reportedly started as a lingerie model then transitioned into teaching, while Boselli pursued modeling after starting his teaching career. (It's also worth noting that Laird's story might contain some inaccuracies, as the Independent, which initially reported on Laird, has since removed its story.)

But the fact that one woman was framed as a wrongdoer while Boselli became a viral sensation highlights an issue we've seen countless times before; just consider the teacher in South Carolina, who was forced to resign after students got a hold of her sexts. Women are subject to harsh critique for outright displays of sexiness, while men are celebrated when they do the same.

This is reflected not only by tabloid news coverage about teachers-turned-models, but also more generally by the culture of thirst. Male "thirst traps" like The Game are often regarded with mere amusement, while Kim Kardashian West is dragged across the internet for posting a naked selfie and accused of "self-exploitation."

As Lauren Duca wrote for Mic, "Women are judged for the quality of every inch of their bodies, constantly criticized for showing either too much or not enough skin." Women's bodies are automatically sexualized almost no matter what they do; but thanks to society's hypocrisy, a woman owning that sexuality and presenting it on her own terms is seen as crossing a line.

Of course, someone like Kardashian West doesn't concern herself much with other people's judgements, unless it's to swat them away. But the cynics living in a dark corner inside of us know the double standard for judging men and women's sexuality will probably persist — especially when people don't realize it's happening in the first place.