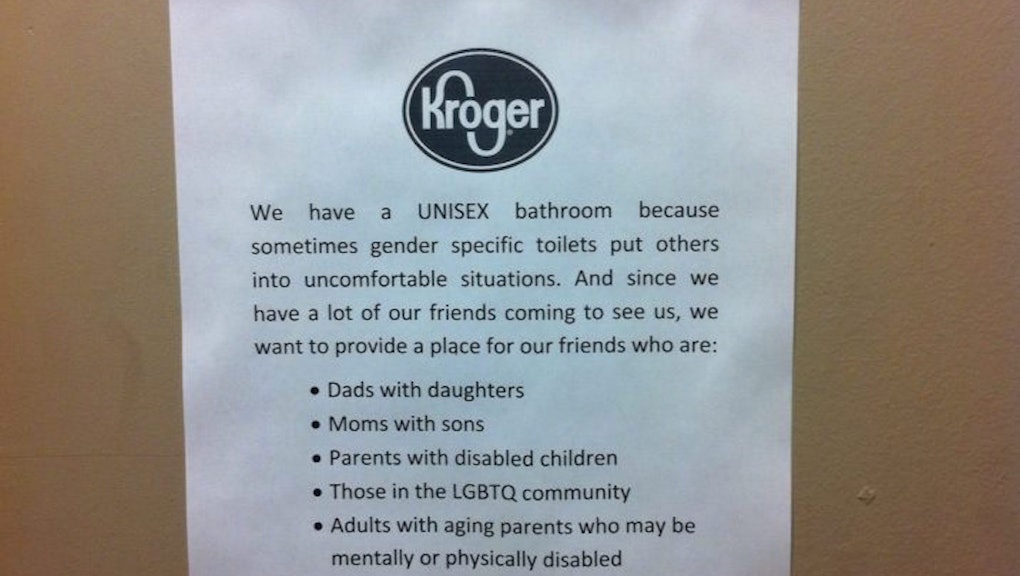 People love to do a little reading inside the bathroom, but this sign outside a restroom is really worth a read.

Over the weekend, a Kroger grocery store customer posted a photo of a sign hanging outside the bathroom stall in an Athens, Georgia, location.

"We have a unisex bathroom because sometimes gender specific toilets put others into uncomfortable situations," the sign reads. "And since we have a lot of friends coming to see us, we want to provide a place for our friends who are:

"Kudos from a loyal Kroger customer!" one commenter wrote.

"I wish all businesses and people would extend this kind of courtesy," another commenter said.

As is the case with any comments section, not all commenters were kind.

Part of the post's popularity no doubt stems from the passing of a law in North Carolina that banned transgender people from using the bathroom that matches their gender identity. In the wake of the bill's passage and signing by Gov. Pat McCrory, many North Carolinians and Americans have spoken out against the legislation.

Thankfully, this Georgia Kroger has not bought into the myths regarding transgender people and public bathrooms. Instead, this business has decided to let people do their business in peace.