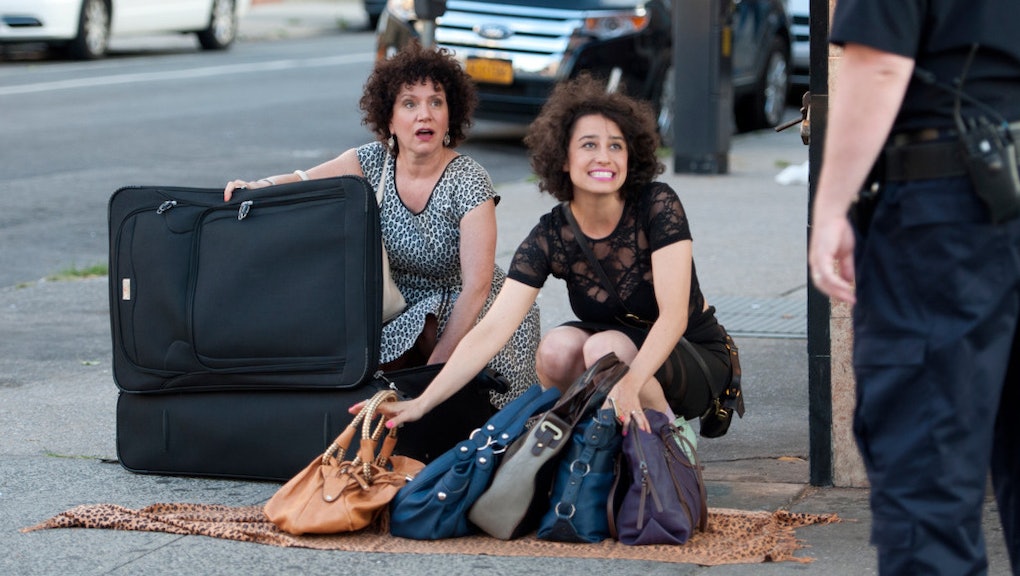 You may never willingly buy anything illegal, and you may consider designer knockoffs tacky or immoral. But if you shop at fast fashion giants like Forever 21 or Zara, your closet is likely stuffed with items that exist in very gray legal territory.

Because chances are you own your fair share of "dupes." That's what fashion bloggers call them, borrowing a well-established term from the beauty world to describe cut-price versions of luxury products that deliver the "same awesome results" at a fraction of the cost.

Right now the fashion blogosphere is buzzing about dupes of Chloé's popular Drew handbag, with similar styles from brands like Forever 21 costing as little as about 1% of the price of the original crossbody, while look-a-likes of Vetements' jagged hem jeans are available for $50 from Zara compared to $1,395 for the original frayed pair.

Dupes don't claim to be the real thing — you might not have known that those slingback pumps or platform brogues you bought were rip-offs of Valentino and Stella McCartney. But they're similar enough in inspiration that if you did realize they had a designer doppelgänger, you might confuse them for the real thing from a distance (or at least in an Instagram snap), like those Mansur Gavriel-inspired bucket bags that have so riled the New York label, it is pursuing legal action against copycats.

Unlike actual counterfeits that replicate brand names, logos and every little design detail, dupes aren't illegal, leaving the customer guilt-free. The terminology also helps: The word, Google searches for which are at an all-time high, is free from the negative baggage of the likes of "knockoff" or "rip-off," helping us feel less icky about purchasing not-exactly-original designs.

But that doesn't mean they aren't still a threat to designers.

The sneaky legal loopholes of "dupes": "It is absolutely legal for consumers to purchase knockoffs. That's why Forever 21, H&M, Nasty Gal, etc. exist and are so amazingly profitable," Julie Zerbo, founder and editor-in-chief of the Fashion Law blog, said via email. "While knockoffs (as distinct from garments/accessories that enjoy copyright, trademark and/or patent protection) are ethically questionable, they are completely legal in the U.S."

Counterfeits that directly rip off brand names and logos are more easily punished by law because the likes of Chanel's name and its famous interlocked C's are protected by robust trademark regulations.

But if you can't get something copyrighted or trademarked, or file a design patent for it (as some companies like Levi's, Céline and Jimmy Choo have), it's harder to legally protect your design.

U.S. copyright law "does not tend to protect designs in their entirety because copyright law will not protect useful articles," according to the Fashion Law's Zerbo, or at least not the "mechanical or utilitarian aspects of such works of craftsmanship."

For that reason, Zerbo said, "In the U.S., most designers face an uphill battle when they're copied."

Designers still have a tough time penalizing those who make dupes that don't directly violate a trademark, copyright or patent. Big names like Christian Louboutin have lost out when taking on high-street chains that are careful to make their designs just different enough to shield themselves from legal penalties.

The result is that rip-offs are not only surviving, but are actually being produced at a faster rate than ever before in line with how we currently consume fashion: We want what's hot on Instagram, and we want it now. Fast fashion outlets and online retailers can turn around new designs in a matter of weeks, meaning copies of runway pieces can arrive in stores before the original garment goes on sale.

The joy of the copy: "Would I carry a fake designer bag? Absolutely not," wrote London-based blogger Josie Fear. "But over the last year or so, I've wanted to change my handbags more regularly. ... So the solution, for me, is to purchase a dupe."

Here is where the magic of the term "dupe" comes in. While "fake" is a dirty word in fashion and "counterfeit" sounds unethical, the more neutral-sounding "dupe" suggests making savvy purchases and "somehow cheat[ing] the system" to get the look for less.

Advice on where to find dupes is everywhere online, with blogs like the Budget Babe, Penny Pincher Fashion and Penny Chic and retailers like Jessica Buurman helping the cash-strapped dress like celebrities. These sites also highlight another irresistible appeal of dupes: the thrill of the chase and the joy of getting your hands on the perfect one.

And if you're feeling lazy, there's an app for that too: The Hunt will track down original items or dupes from social media posts you like.

"I know dupes aren't for everyone, and if someone delivered a Chloé bag-shaped baby I would be happy to adopt," wrote Lydia Abraham of Fashion Influx. "But for now, there's no chance I'll be spending nearly $2,000 on an accessory. Sigh... One day!"

The real cost of copying: So is copying really so bad? Some designers actually believe, just as Coco Chanel did, that imitation really is the sincerest form of flattery. Others argue that copying brings healthy competition to the industry. Olivier Rousteing of Balmain has even praised Zara's "genius" in mixing and matching his designs with those of other top-level brands.

"Most of the time, I find it really flattering and exciting," Céline's Phoebe Philo told Vogue U.K. during the 2014 Vogue Festival. She's in luck: The minimalist label has inspired many a knock-off from Zara to Mango and H&M to Forever 21.

But, as Zerbo explained, "[Most designers believe] copying is extremely harmful, as it serves to dilute brands, takes away from their most popular and brand-building designs and oftentimes prevents designers from engaging in mass market collaborations to effectively knock themselves off."

It's also not just big name designers who are ripped off; smaller, emerging designers have also seen their looks copied on the high street. The difference is that they lack the budget and influence to do much about it.

Fast fashion already raises plenty of ethical questions, with exploitative manufacturing and environmental costs casting a long shadow over our $20 summer dresses. When it comes to dupes, we might think we're the smart ones. But in many ways, we're the ones being duped into spending our cash for low-quality fashions that will quickly fade. In the words of much-copied designer Miuccia Prada, "With clothes that cost little, you need to ask why they cost so little. Because no one ever asks themselves that."