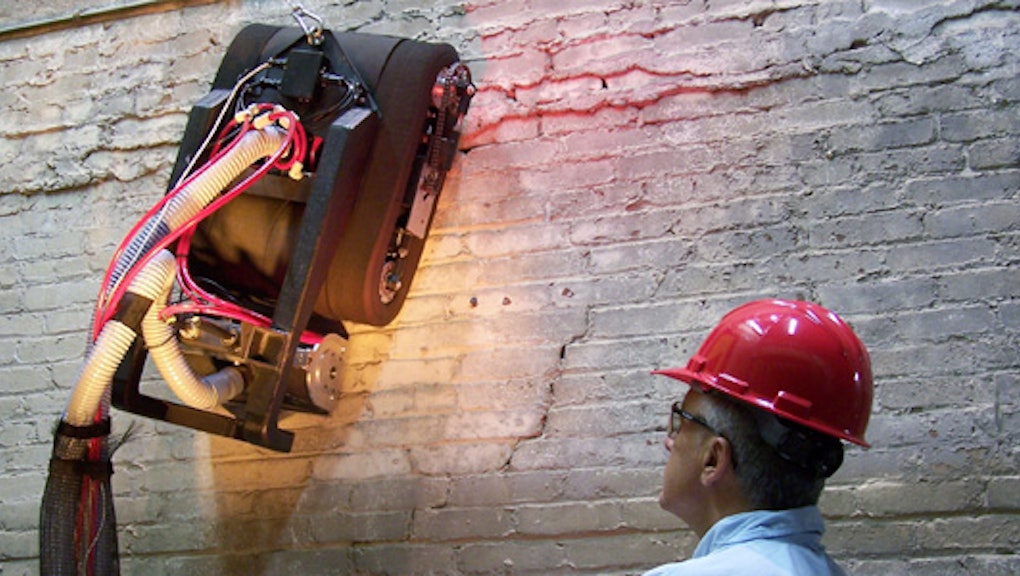 "The machines are coming for our jobs!" But that doesn't always mean they are trying to displace the human workforce — it could just mean robots are going to climb a hot, dangerous tube while the human operates it from a safe distance.

A new robot, developed by International Climbing Machines, is designed to inch up electric power station boiler tubes, a job typically done by a human. With the Boiler Tube Wall Climbing robot, workers don't face the risk of injury due to dangerous heights and toxins. The BTWC is created to delve into "the harsh, dirty conditions and the confined space" of power plant boilers, ICM states.

The robot isn't part of the automated workforce movement — each magnetically held climbing machine is remotely controlled by a human worker. Sam Maggio, president of ICM states on the company site: "ICM is not replacing workers — we are re-skilling workers."

See robo-spidey go: The BTWC robot inches up power station tubes by attaching itself with electromagnets, Gizmag reports. It is equipped with both front and rear-mounted cameras that can "pan zoom and tilt" so that the human on the ground can remotely navigate and conduct an inspection of the boiler tube surface.

Where many humans have gone before (but shouldn't): The ICM climbers have applications aside from scaling hazardous boiler tubes. They are also being used to inspect and repair wind turbine blades and towers, hot cell and radioactive areas, and nuclear containment domes. These machines are designed to climb dangerous surfaces, not the company ladder.