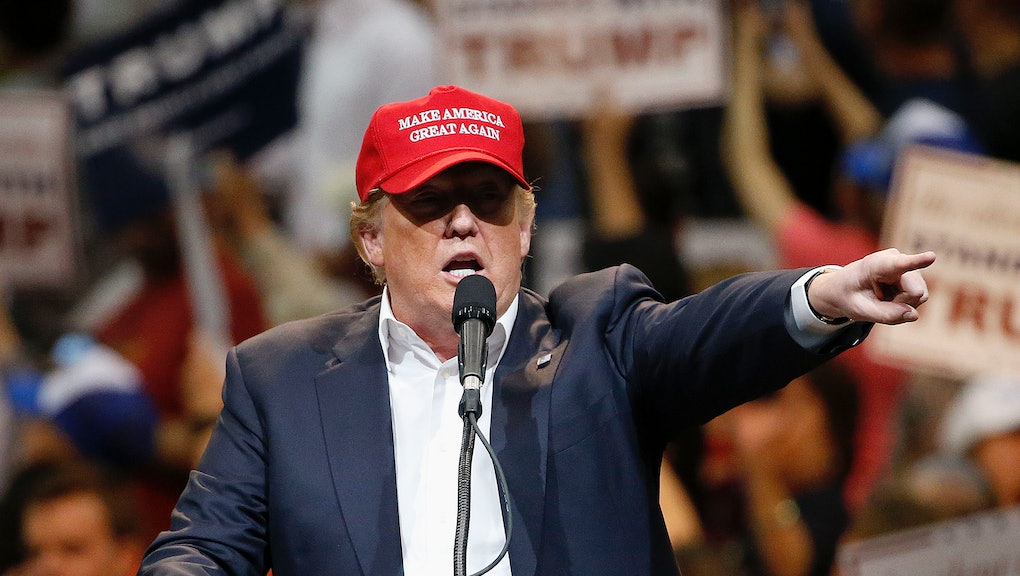 Were you aware that Democratic presidential candidate Hillary Clinton gave an inspiring, passionate speech following her landslide victory in the March 8 Mississippi primary?

Because the mainstream media was too busy covering Republican presidential frontrunner Donald Trump's boisterous, incoherent speech about "how rich he is" that same day.

This coverage pattern is common, as Media Matters for America pointed out in a broadcast Sunday.

The nonprofit's broadcast, "The Media's Out-Of-Control Obsession With Donald Trump," argued the media has acted as Trump's puppets throughout the campaign as he feeds them juicy headlines they can't resist about topics like genital size and political incorrectness.

In concentrating so heavily on Trump's antics, the media has both failed to balance coverage among presidential candidates and distracted the public from the true "awfulness" of Trump's racist, sexist, xenophobic campaign, Media Matters pointed out.

Here are some highlights from the broadcast:

"It's easy to guess why. Trump is an asshole and assholes are ratings gold mines. Or as CBS CEO Les Moonves put it ..."

Other candidates get left in the shadows. Like Hilary.

"Did you know Hillary Clinton gave a pretty moving speech after winning a landslide victory in Mississippi? Probably not because no one saw it."

But Trump's ramblings are featured front and center.

"Instead every major news network aired Trump's 42-minute stream of consciousness rambling about how rich he is and how great his steaks are."

The cycle shows no signs of slowing.

"And it's been like that for months. News networks have been airing Trump press conferences live, unedited without commercials breaks ...

... for no reason other than he's a one-man circus and occasionally fights with reporters."

Even when Trump is not doing anything, reporters are on it.

"When they're not airing his speeches they're doing live shots of reporters waiting for his speeches."

If they can't show his face, they'll play his voice.

"Have you noticed how often Trump is able to call in to news interviews? That's not normal."

Phone interviews are a cheap tactic for showcasing Trump.

"Networks are so eager to get him on air, they let him do his interviews over the phone so he can flood the airwaves at basically zero cost."

"He gets his shiny headshot and voice on TV and he doesn't even have to put on pants."

But as the video shows, that's not even the most frustrating thing about Trump.