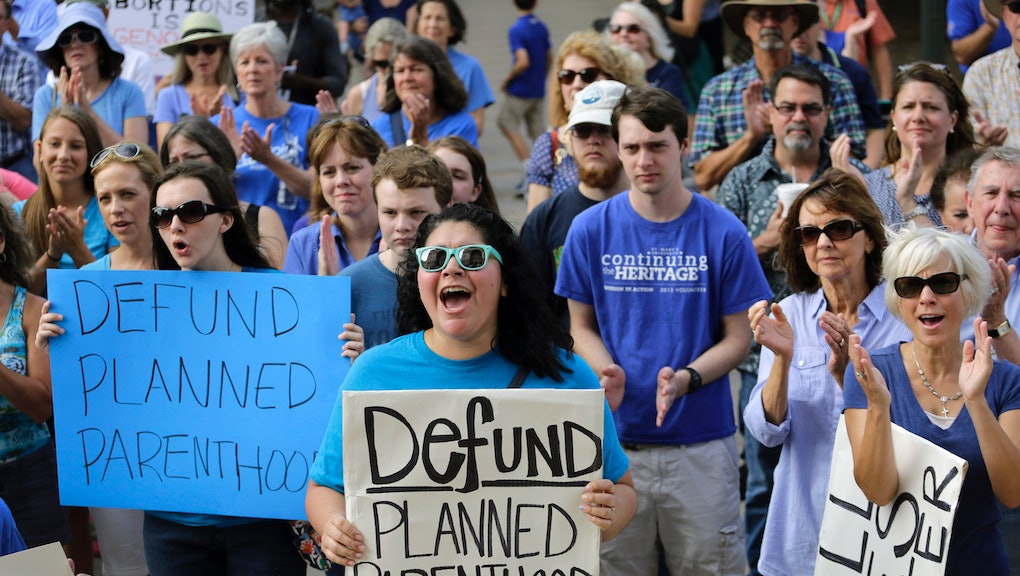 Planned Parenthood has long magnetized controversy, but lately, the debate surrounding it has ballooned into an all-out war, one with real casualties. On one hand are the organization's supporters who tout the many benefits its facilities offer communities, while the other side, particularly the religious right, argues that scrapping the organization is in women's and children's best interests and would ultimately slash abortion rates.

Despite the fact that access to Planned Parenthood's services (including, but certainly not limited to, abortions) most directly affects women and children, the conflict no longer has much to do with either of them. "Women's health is becoming this political pawn that politicians are playing with, and it's dangerous," Dr. Pratima Gupta, reproductive health advocacy fellow with Physicians for Reproductive Health, said in an interview. "You can't use women's health as a tool for your political gain."

And when people do, Gupta explained, it's the "historically disenfranchised" who end up under the bus.

Conservative politicians have frequently and successfully used Planned Parenthood to appeal to their voter bases. As a result, the fight to keep the organization funded and operating feels increasingly like a game of whack-a-mole, as one effort after another crops up to squash it. Planned Parenthood has become the hook upon which the right hangs its anti-abortion ire, so much so that anti-abortion has become synonymous with being anti-Planned Parenthood. In Gupta's words, "it's almost become the brand name for reproductive health, sort of like Kleenex is to tissue."

For the Right, It's About Hitting Democrats Where It Hurts

In decades past, conservatives and liberals may have disagreed on the subject of abortion, but family planning was more or less "universally supported," said Leighton Ku, a professor in the department of health policy and management at George Washington University's Milken Institute School of Public Health. Republicans who opposed abortion realized that the surest weapon against it was widespread access to contraception — preventing unwanted pregnancies from happening in the first place.

"What's disturbing to me is that consensus has fallen apart within the past few years," Ku said.

Planned Parenthood serves about 5 million people — women and men — nationwide, every year, according to the organization. It also performs over 270,000 Pap smears, 360,000 breast exams, 4.2 million tests for sexually transmitted infections and reaches 1.5 millions people through educational programs annually. Of all the services Planned Parenthood provides, roughly 3% are abortion-related.

Conservatives claim that Planned Parenthood is the nation's "largest abortion provider." In a sense, it is: Planned Parenthood is the nation's largest reproductive health care provider, which sometimes means abortions — although not every clinic offers them. When women terminate pregnancies, according to Gupta, the vast majority of them do so in private doctors' offices.

Why, then, are conservatives so intent upon bringing down Planned Parenthood? Ku said that the reason is purely political. Planned Parenthood traditionally throws its weight behind Democratic candidates, who tend to be pro-abortion. It's an obvious target for those who are looking to take from the party's coffers.

Planned Parenthood's political action committees — the Planned Parenthood Action Fund and Planned Parenthood Votes — were the most effective lobbyists in the 2012 election. Take the organization down, and you cut one of the opposition's main lines of campaign funding. It's sort of like the National Rifle Association is to the Republican party and its candidates, only miles more effective, if the last election is anything to go on. Planned Parenthood is, then, a valuable political poker chip, and abortion is an effective way to inflame voter emotions.

The most vocal Planned Parenthood opponent on the current presidential stage is Texas Sen. Ted Cruz, who is tenaciously anti-abortion and has said he does not believe in the procedure under any circumstances — including the three qualifying cases for which federal medicaid funds could be used to help a woman terminate her pregnancy: rape, incest or her life's endangerment.

"I've pledged, if I'm elected president, on the very first day in office ... to open an investigation into Planned Parenthood and to prosecute any and all criminal conduct by that organization," Cruz said when asked to comment on the charges brought against David Daleiden and Sandra Merritt, the videographers behind the discredited Planned Parenthood sting videos.

When politicians like Cruz make Planned Parenthood public enemy number one; when an entire party takes aim at a medical organization and fires with the avowed intention of cutting down said organization for political reasons, it's women and children who lose. For evidence, we can look south, where a string of omnibus bills are currently plowing through states' legislatures.

When Women Lose, Everyone Loses

The most recent example of these Targeted Regulation of Abortion Providers, or TRAP, laws comes from Florida, where Gov. Rick Scott signed the Texas-style House Bill 1411 into law on March 24. As has been the case first in Texas, then in Louisiana, such laws — which levy impossibly strict standards on Planned Parenthood and other abortion clinics — have forced the closure of the state's abortion clinics, and in so doing, of many of its family planning clinics. "Florida would, in one bill, do the damage it took Texas years to inflict on women," Cecile Richards, president of the Planned Parenthood Federation of America, said in an emailed statement.

According to Laura Goodhue, Executive Director of the Florida Alliance of Planned Parenthood Affiliates, the organization operates 22 health centers within the Sunshine State, 15 of which provide abortion care. The patient base is diverse, including many young women and men, Latinos, seniors and the medicaid eligible, she said, all of whom would feel the absence of those 22 clinics in their own individual ways.

The endgame, however, is the same: whatever the specific services that disappear when Planned Parenthood's doors close, the unifying theme is a community placed at measurable disadvantage. "The TRAP laws are made under the guise that they're protecting women's health, but they're doing quite the opposite," Gupta said. "What they're doing is they're shutting down women's reproductive health care centers and then making it that much more difficult, in some cases impossible, for women to seek reproductive health care services — including abortion — in an environment where it's safe and legal."

A study by the Guttmacher Institute found that some 45% of low-income women in two Florida counties relied on federally funded clinics for their contraceptive needs. In both places — Collier county and Palm Beach county — Planned Parenthood provides targeted programs in response to requests from their respective health departments, according to Goodhue.

In Palm Beach county, for 20 years, Planned Parenthood has spearheaded educational programs for teens, which look particularly valuable in light of a recent study that suggests proximity to a Planned Parenthood — and no other Title X-funded clinic — means more girls graduate high school. One wonders what will happen to graduation rates in Palm Beach once the teenagers who have so long relied on Planned Parenthood are suddenly left without.

But it's not just Florida. Scott County, Indiana, for example, saw a massive, "epidemic"-scale leap in HIV diagnoses following the closure of its Planned Parenthood clinic, the only local site for HIV testing. In Collier county, where the population is largely Latino and largely served by Planned Parenthood, that's a worrisome prospect, considering that efforts to combat HIV/AIDS in the U.S. are currently divided down a color line.

Politicians Should Work With Planned Parenthood, Not Against It

In the wake of Texas' HB 2 passage, Ku and a team of GWU-based researchers took a look at state communities that housed a Planned Parenthood facility. Those facilities typically served "half to four fifths of women's health clients in those areas," Ku said. Texas's alternative federally funded care providers would have to "increase their capacity two- to five-fold" in order to absorb the overflow, he explained; they could accept some, but by no means all, of those displaced patients.

"What [Texas] was saying at that point was, 'It's no big deal if you get rid of Planned Parenthood,'" Ku said. The same was said in Louisiana, in Ohio, in Florida — where the list of replacement care providers for the 1.2 million Floridians reliant on publicly funded family planning services includes 36 dental offices.

As Ku explained, even the primary care providers who could have offered reproductive health services — albeit often in a far more limited capacity than Planned Parenthood could — often lay outside medicaid patients' financial reach, which perhaps explains why they weren't going to those providers in the first place. Individuals in need were more likely to go to community health centers, he said, if they went anywhere at all — and those centers were already operating under tightly constrained budgets.

When Texas closed reproductive health clinics, it became harder for women to get the care they needed. What that meant, Ku said, were spikes in pregnancy and birth rates among medicaid patients.

"The net effect is that ... costs to the state would go up, instead of going down," he said. "So you would reduce services to women, you would increase the number of unplanned births and you'd increase costs." Other casualties of the war on Planned Parenthood include the men who look to it for their reproductive health care needs, and the teens who rely on the organization for contraception and, more than that, for the education they wouldn't necessarily get otherwise. When these services are cut, people are left with nowhere else to go.

Time and time again, statistics show that highly restrictive abortion laws don't lead to fewer abortions. Abortion rates have dropped where conservatives' efforts to cut family planning funds have failed — where contraceptives are readily available for all. "If legislators really wanted to reduce the number of abortions, they would work much harder with Planned Parenthood and other advocates reproductive health advocates to expand services that reduce the number of unintended pregnancies," Goodhue said. "In terms of health care providers, no one does more to prevent unintended pregnancies than Planned Parenthood."